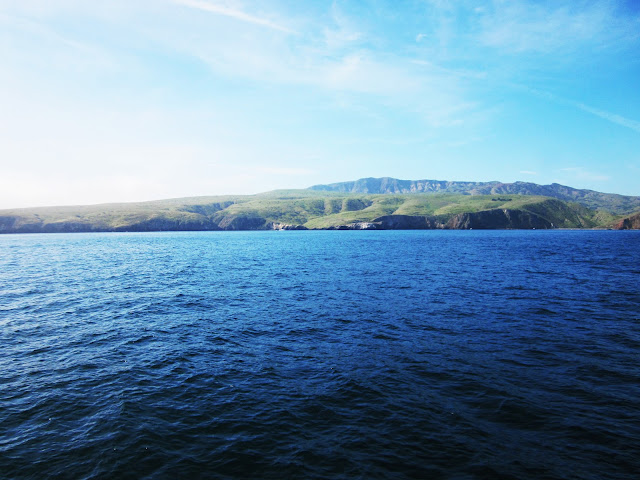 St. Patrick’s Day – no green beer, but a very green island in the Pacific Ocean!

Another ferry ride, this time our destination being Santa Cruz Island, the largest of the Channel Islands.  Our plan was an overnight backpacking trip from Scorpion Anchorage to Prisoners Harbor.  Sounds like a very inviting place, doesn’t it?  Lots of history goin’ on at Santa Cruz.  For starters, the website tells us:  “According to legend, Santa Cruz Island was named for a priest's staff accidentally left on the island during the Portola expedition of 1769. A Chumash Indian found the cross-tipped stave and returned it to the priest. The Spaniards were so impressed that they called this island of friendly people "La Isla de Santa Cruz," the Island of the Sacred Cross. Today the protection and preservation of Santa Cruz Island is divided between The Nature Conservancy and the National Park Service. The Nature Conservancy owns and manages the western 76 percent of the island, while the eastern 24 percent is owned and managed by the National Park Service.”  Access to the Nature Conservancy is restricted (unless they catch you) so our backpack plan was legit on the NPS portion.

This ferry was based at a different harbor than yesterday’s Anacapa Island ferry and we had to be at the dock at 8:00 a.m. to load up backpacks and then wait an hour for departure.  The place was buzzing with day trippers and front country campers.  (Scorpion Ranch Campground is a flat half-mile walk from Scorpion Anchorage, has 31 sites,  reservations only, and campers must haul all their stuff.)  All backpacks and heavy gear gets stowed below deck to make room for all the people above.  This boat was faster and we were dressed more appropriately for the chill.  When the crew slowed down to look for whales, I’ll admit feeling impatient to get on to the island.  Fortunately (?) no whales today.

It’s a habit of mine to keep one eye on a cloudy sky, looking for that sliver of blue, and…look, there it is!  As we crossed the Channel, we left the fog behind and saw that today was indeed going to be a spectacular day. 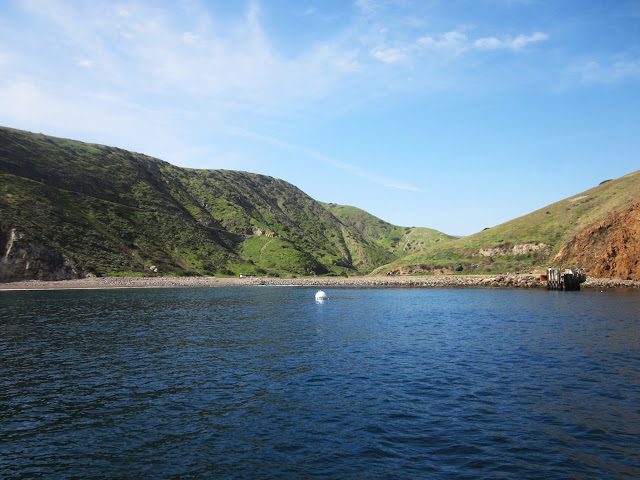 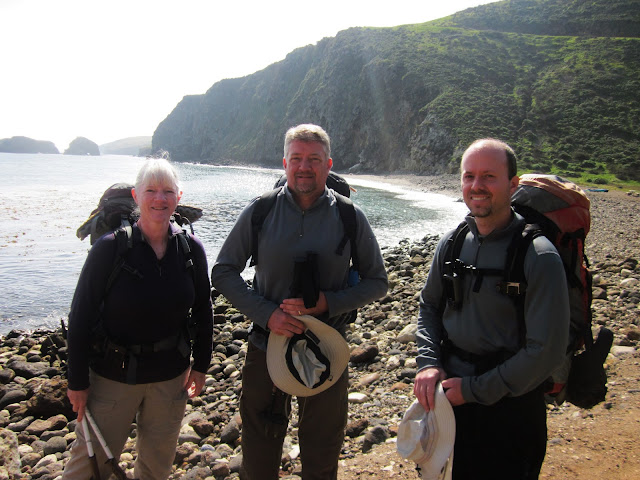 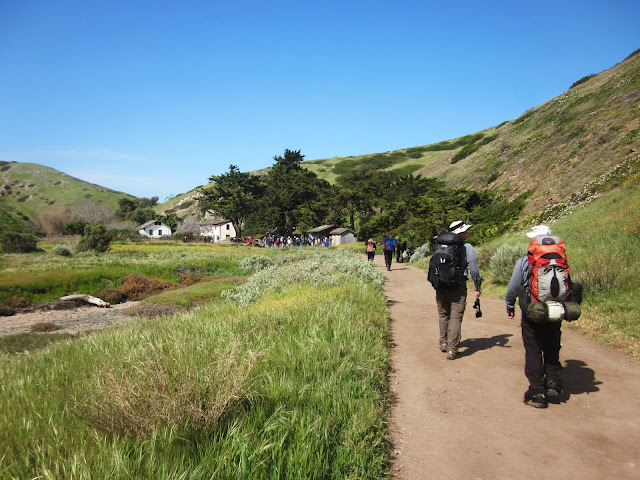 Scorpion Ranch was established in the 1850’s as a sheep ranching operation as the island passed from the Mexican government into private hands.  Ranching prospered at several ranches around the island until 1984. Some buildings perished to fire, some survived, and in 2009 the ranch house was rebuilt as the Visitor Center to serve as an interpretive center.  I am sorry to say that we walked past it all without stopping because it was after 11:00 a.m. and we figured we had 15 miles to go to our campsite.

At the Scorpion Ranch frontcountry camp we filled all our available containers with water.  This is the only place to get potable water on Santa Cruz Island, meaning we had to carry water for two days of hiking, plus cooking, plus some extra in case the ferry was delayed due to weather.  There is no water available at our pick-up point at Prisoners Harbor some 18 miles away.  Of course, we knew all this ahead of time and had planned accordingly.  I was still not happy about carrying the weight of six liters of water when I normally carry a maximum of two, but it was what it was.

If I have the opportunity to go to Santa Cruz again (I can easily be talked into this) I would base camp at Scorpion and dayhike all over the place, plus try out a kayak in the harbor.  Plenty to do there for a few days. 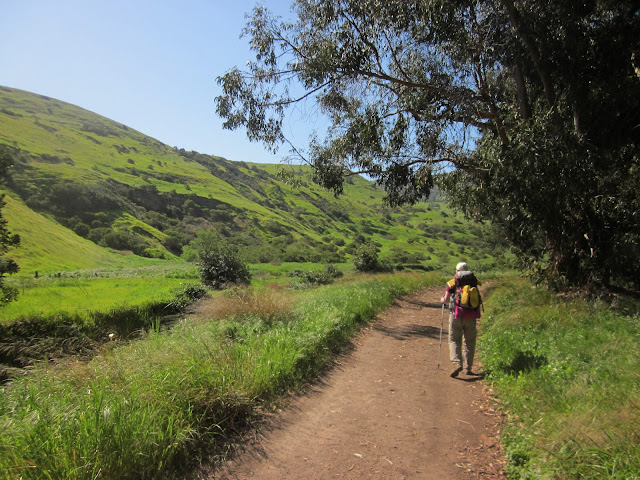 And away we go up Scorpion Canyon Loop Trail, and I do mean UP.  After a brief honeymoon strolling in the valley, the trail turned left and began a serious climb.  Soon we were looking down at all the greenness we had been looking up at.  We went from gentle Irish countryside to Switzerland steepness quickly (minus the Alps).  No laid back island ease here, the mountains are like all others with the exception of no tall trees and 100% long distance views.  After the chilly boat ride it felt great to be in shorts and short sleeves.  Wish I had remembered the sunscreen, though. 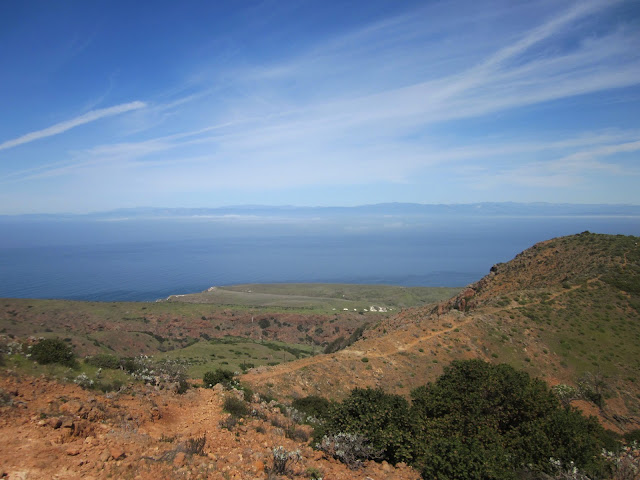 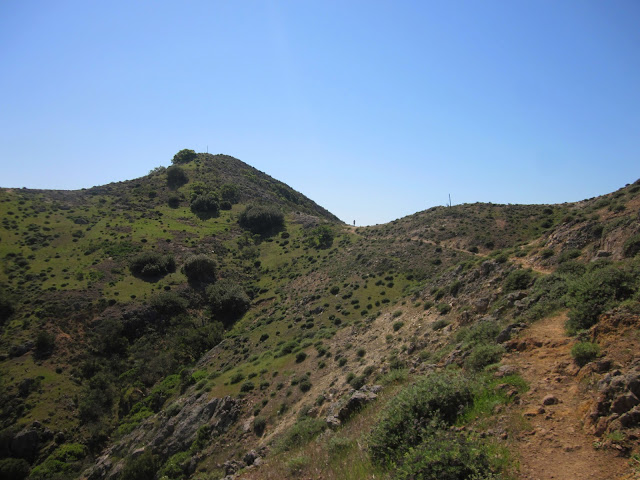 Jeff steered us to the high point of the NPS section of the island, El Montanon, a 1.5-mile roundtrip off our main trail. 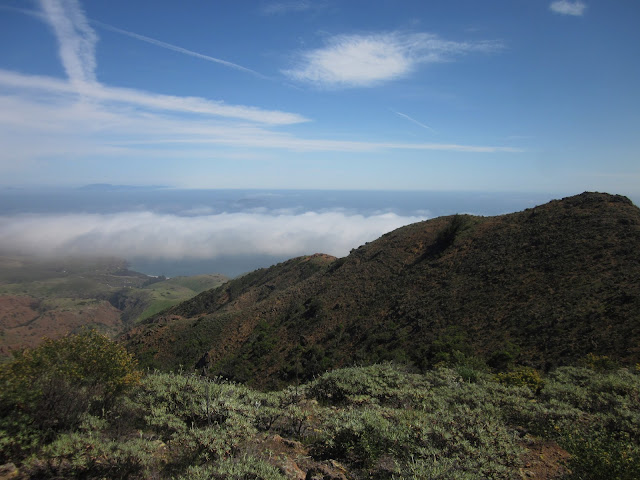 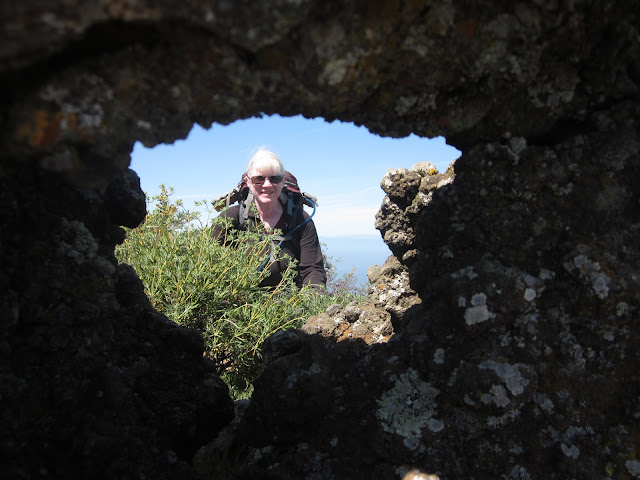 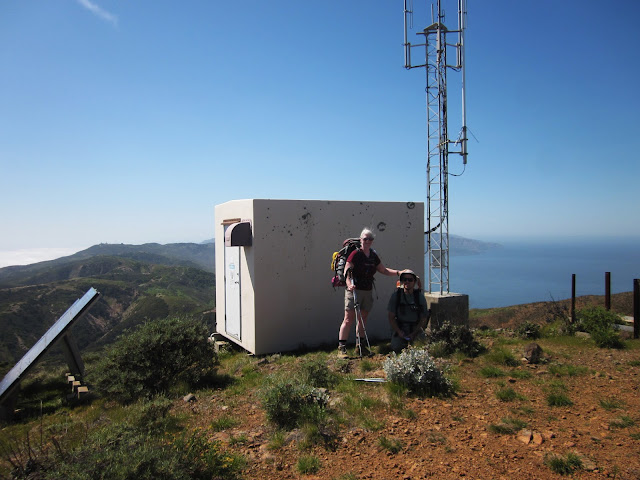 Jeff found the “register” to sign, a scrap of paper.  The communication towers at the summit are ugly but great for pinpointing from far away. 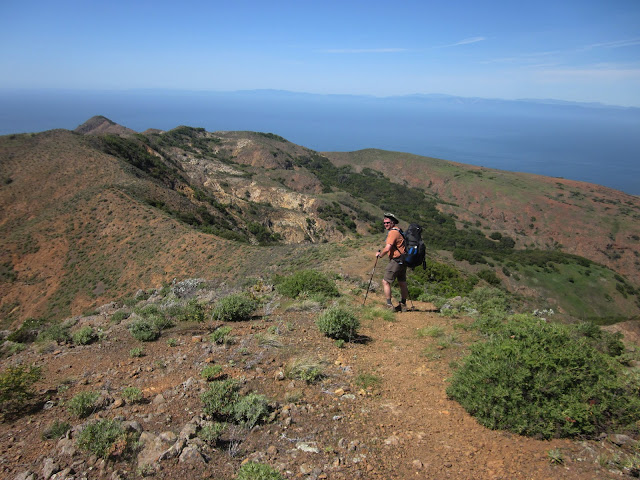 David was ready to move on.  He led the way most of the time, with me in the middle and Jeff in the back, frequently disappearing to take pictures.  You always need to watch what you’re doing with Jeff behind you…you may turn up in pictures on Facebook.

After our side trip, the main trail took a steep dive and I slipped twice, landing on my rear end.  Loose scree and me do not agree. 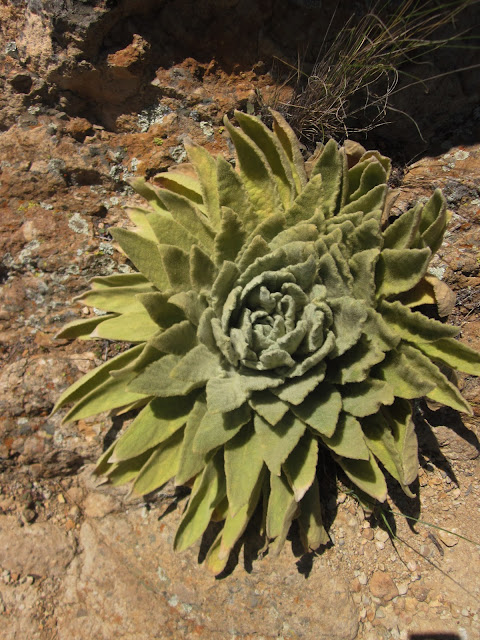 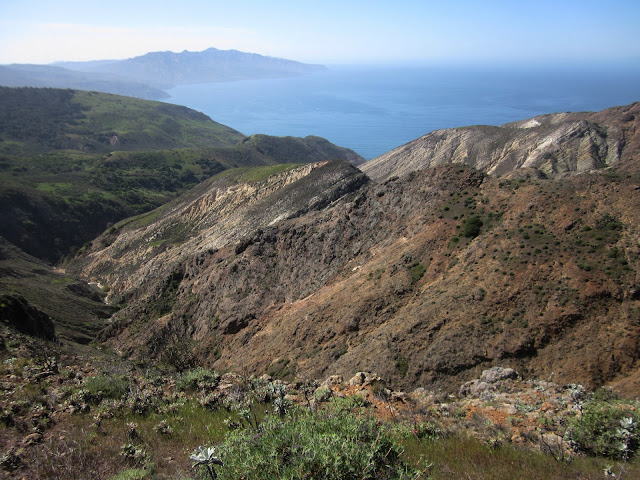 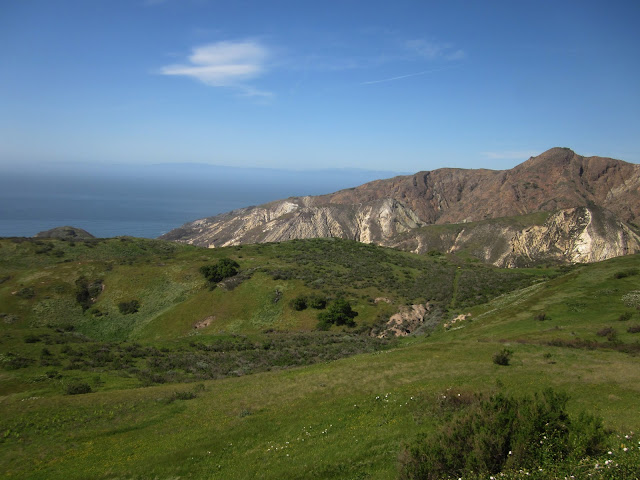 The terrain alternated between lush green and arid desert, all of it beautiful 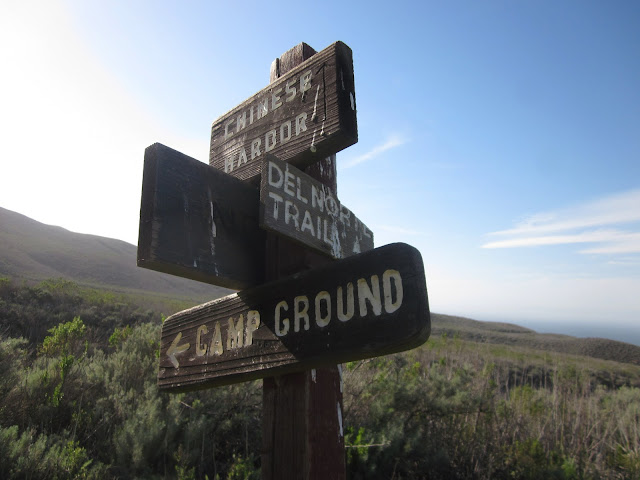 Soon after the trail switched to old roads, still climbing a lot but with soft grass to walk on.  Mileage was a bit fuzzy.  According to Jeff’s research, we would have to take a roundabout way to our campsite because the trail on our map was unmaintained and a challenge to navigated.  But…when we found the sign, we took a chance and it was just the opposite, a very good trail.

So we were cutting off a few miles and my body was grateful.  My feet were hurting and my knees and thighs were tired of the downhills.  Why was this hard at only 12 or so miles?  All that extra water added up to about 8 extra pounds and mentally I wasn’t accepting it.  But with one foot in front of the other and a little self-talk that a physical challenge is good for me and I was in a place that no one else I know has ever been, I got myself to Del Norte Campground. 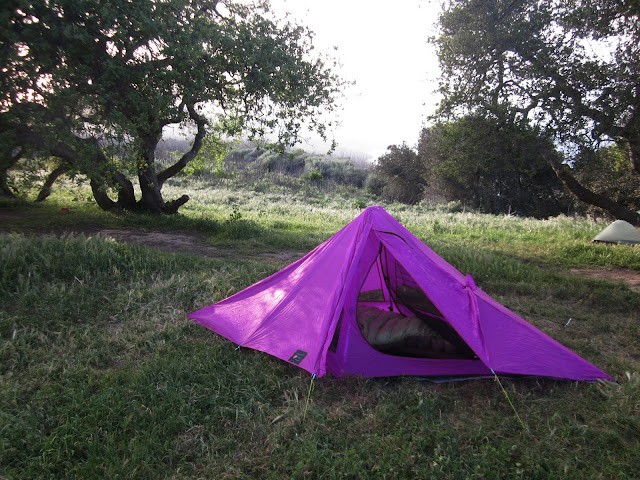 Del Norte is the only backcountry campsite on Santa Cruz, just four small sites under a couple of ancient oak trees with a view of the coastline.  Two of the sites were already occupied and no one showed up after us.  Windy conditions are very common and we were prepared with extra guy lines for our tents, but the wind was minimal, not a factor at all, really, and we had a very peaceful night.

But before bedtime was settling-in time and suppertime.  Jeff and I opted to leave stoves and fuel and dehydrated meals at home to avoid carrying even more water.  I didn’t even carry a cup or a spoon.  I think I had a peanut butter sandwich to eat and Jeff maybe had a sausage and cheese sandwich.  David, made of tougher stuff, carried cooking equipment which he fired up for hot tea and a gourmet dinner.  I was okay with my food but felt a glimmer of regret for that cup of tea… 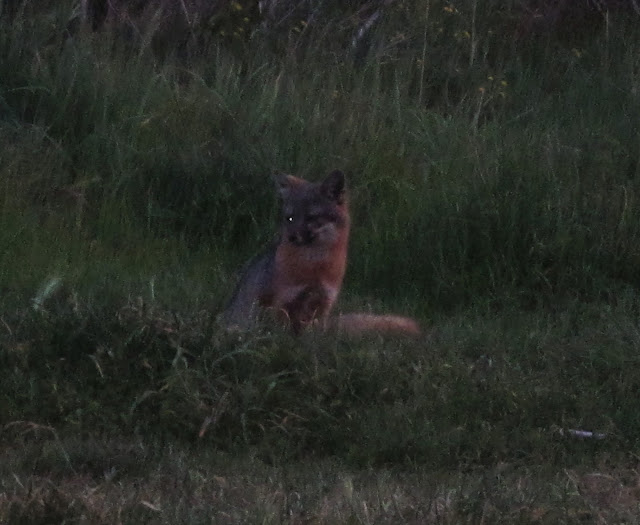 The critter to hide food from on Channel Islands is foxes.  Sure enough, one fellow visited soon after we arrived.

As the sun went down, so did the temperature, and I added layers of clothing as we sat around the picnic table.  Before it was fully dark I was stretched out in my tent, thinking I would write some notes and read a little, but that definitely did not happen. 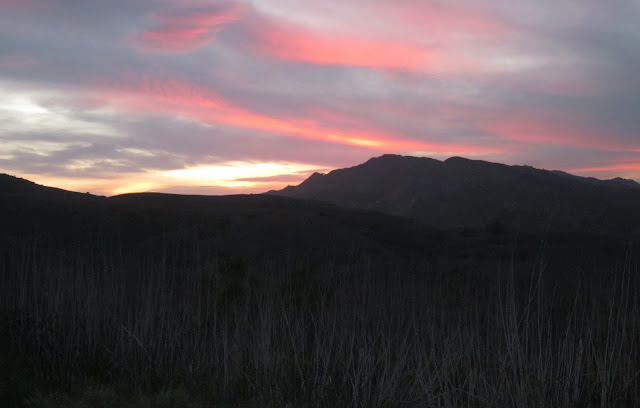 “Do not spoil what you have by desiring what you have not; remember that what you now have was once among the things you only hoped for.”   ~Epicurus