Sore thighs this morning and the slightly daunting realization that our car was about 16 miles away.  We can hike big mileage in an overnight, right?  Like childbirth, Carol and I had forgotten the pains.  However, we knew an iconic place was coming up:  Beauty Spot, TN 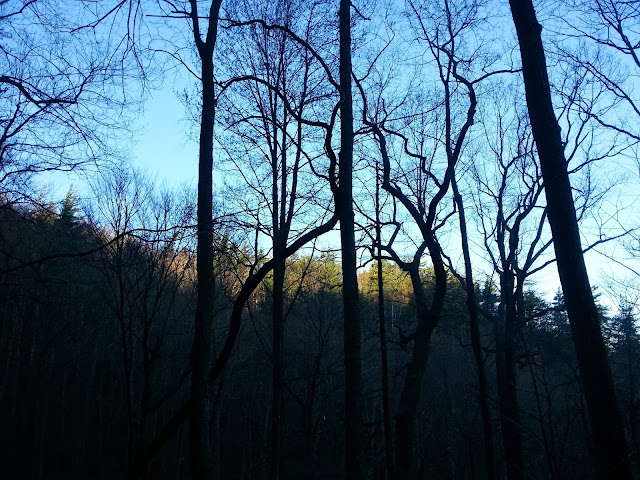 Sunrise fire on the mountain 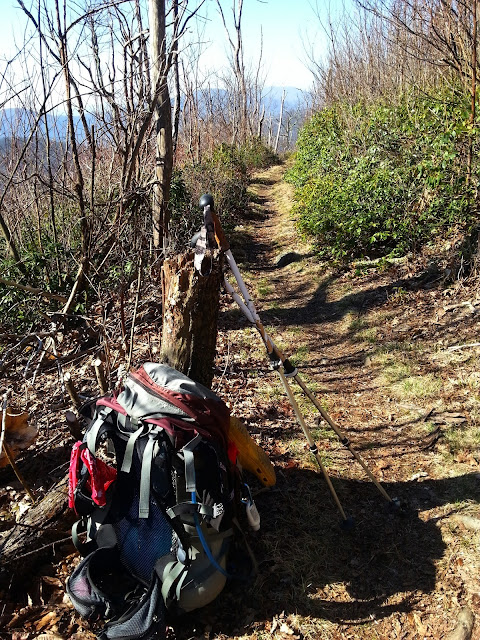 The chill quickly dissipated as the trail ascended.  I stopped to remove a layer of clothing, grab a little breakfast, heck, might as well take a photo and pee too while the pack is off. 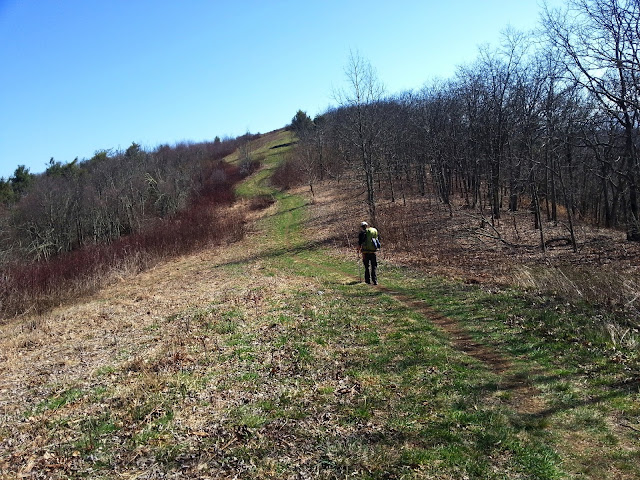 Beauty Spot is a grassy bald on the shoulder of Unaka Mountain on the NC/TN border.  It is easily accessible with a parking area nearby, but it’s way more impressive to approach it walking northbound on the AT. 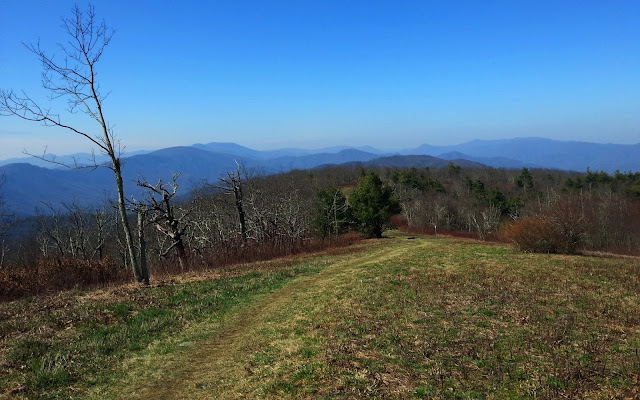 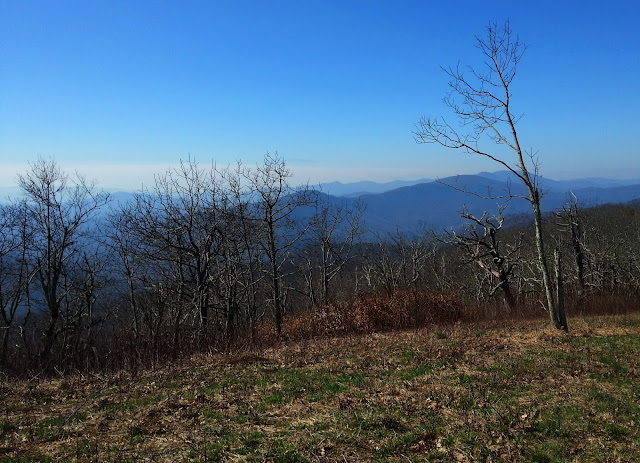 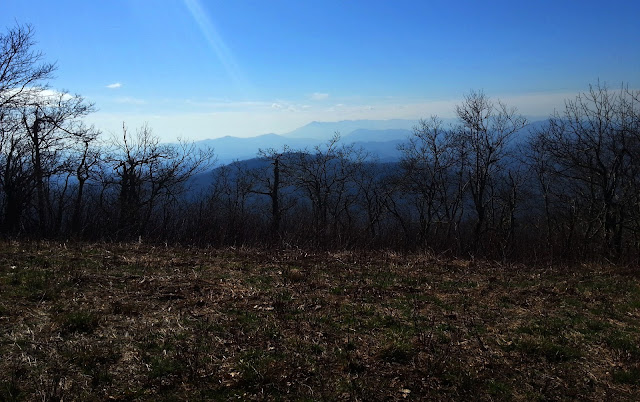 A sweet campsite (not ours) 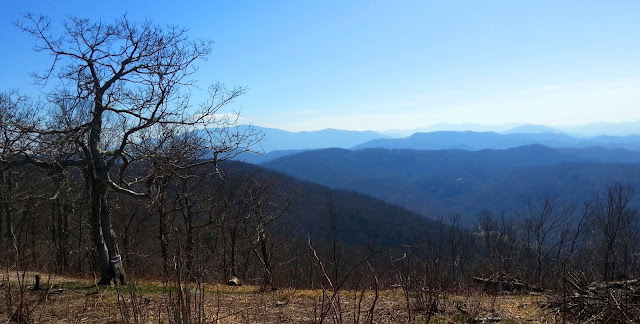 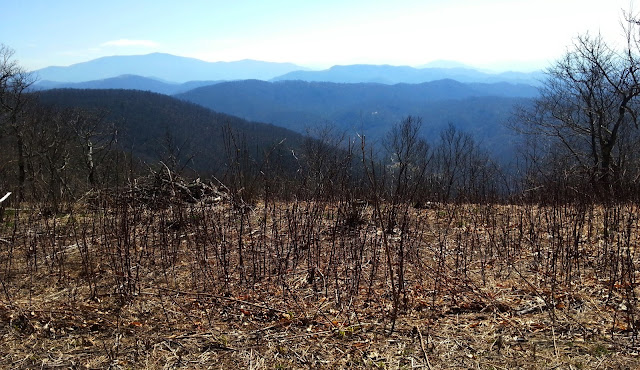 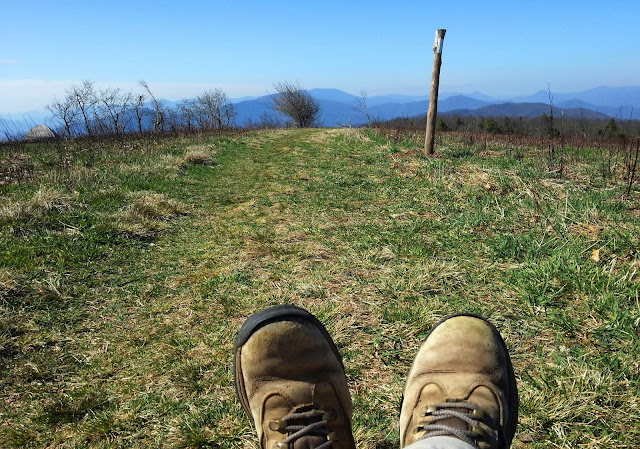 Relaxing at Beauty Spot, watching clouds and feeling the breeze.  There was a fellow flying a drone, too, but he didn’t overstay his welcome.  Nice day for it, although I’d rather have seen him flying a kite. Le sigh. 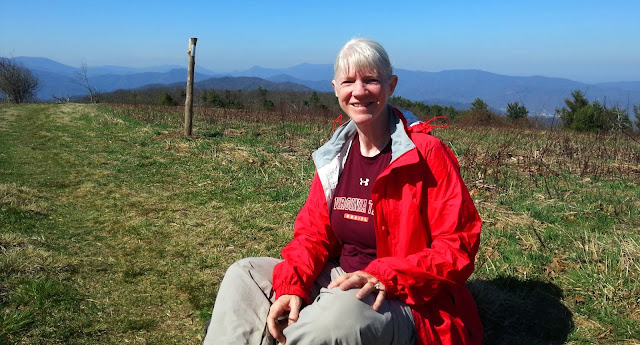 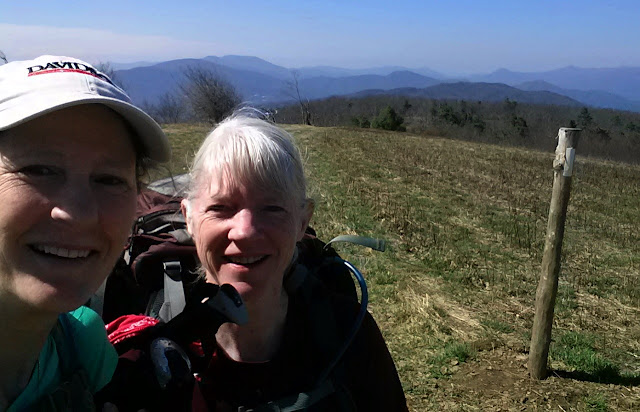 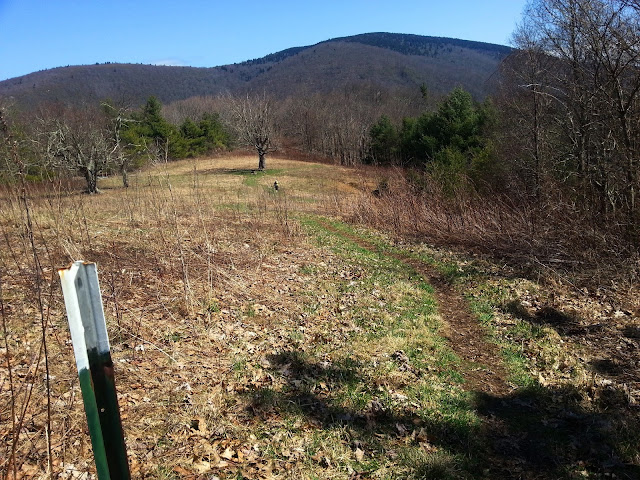 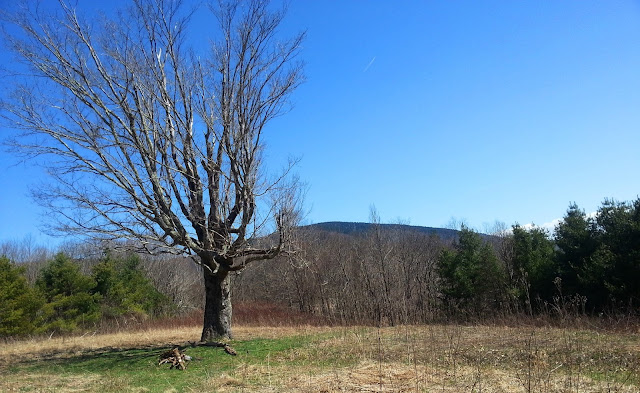 The AT rubs up against Unaka Mountain Road on its way to Deep Gap (seems there is a Deep Gap in every mountain county).  As I walked alongside, a forest service ranger stopped his truck to say hello and ask how many thru-hikers I’ve seen.  They are gearing up for a busy season. 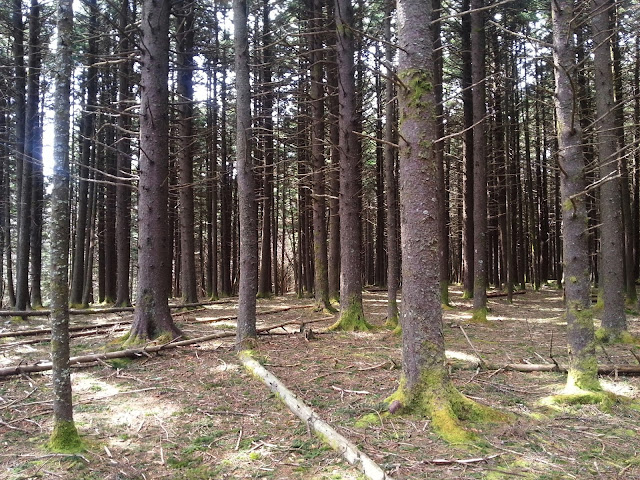 As we continued hiking up the side of Unaka Mountain, we passed first through rhododendron tunnels and hardwoods, then into an evergreen forest of spruce and balsam up to the gently rounded summit (no view). 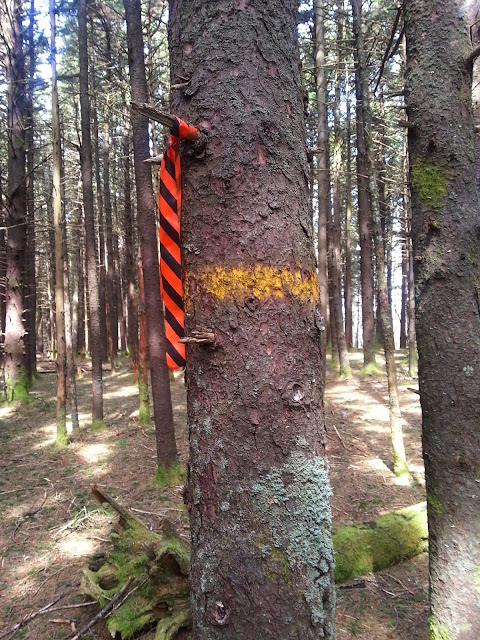 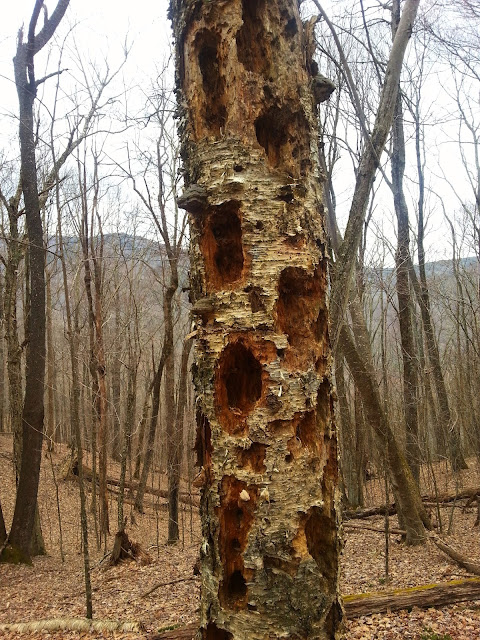 A critter condo constructed by woodpeckers

Next the trail descended steadily down to Low Gap (ditto on that “every mountain county” remark) and then followed a few bumps before our last ascent of the hike, Little Bald Knob.  Although minor in terms of the elevation we had already encountered in two days, this last push seemed difficult, as last pushes usually do. 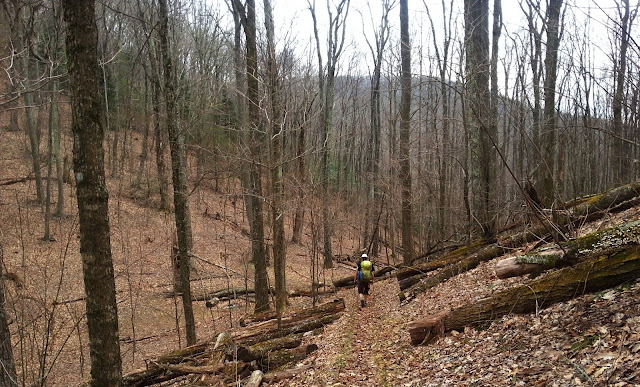 We were rewarded with a quiet, soothing, tranquil walk through open forest down to Iron Mountain Gap.  Not much green yet, but the stillness held a beauty all its own.  We walked in peaceful silence.

Carol and I agreed that we are good hiking partners with similar paces, habits and temperaments, and we created a “mutual admiration society.”  Looking forward to more adventures!


“We live in a wonderful world that is full of beauty, charm and adventure. There is no end to the adventures we can have if only we seek them with our eyes open.” ~Jawaharial Nehru
Posted by smoky scout at 3:39 PM No comments:

AT in TN: Spivey Gap To Curley Maple Gap Shelter

Back in my days of hiking the Smokies 900, I spent time in the woods with my friend Carol.  At that time she was dreaming of an Appalachian Trail thru-hike, reading journals, weighing the pros and cons of equipment, learning about shuttles and drop boxes, and wondering how to get her husband on board with the safety of her going solo and being away for several months.  Carol and I hiked now and again over the years after my project ended and her dream did not diminish.  In fact, her scheme expanded to include her husband as chief trail angel and cheerleader.

Carol (trail name Penguin) is now in the books as an AT thru-hiker of the Class of 2015.  She celebrated her 60th birthday on the trail. Friends old and new followed her journal where she posted every day and we were (and still are) in awe of her spirit and positive attitude.  She hiked her own hike and had an epic experience. Her husband proudly supported her, meeting her at various points along the way and joining her along with other family members when she summited Katahdin. (Read Penguin's AT trail journal.) 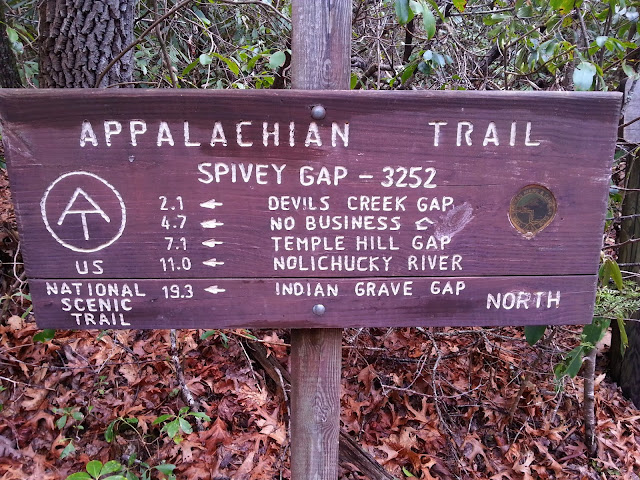 My first hike with Carol after this adventure?  Back on the AT for an ambitious overnight beginning at Spivey Gap in good old Tennessee.

Previously I mentioned passing Greasy Creek Gap and a feud between landowners.  Well, our shuttle driver today was the nice lady owner of Greasy Creek Hostel.  Hearing only her side of the story, her neighbor really doesn’t like her clientele and makes a nuisance of himself in failed attempts to discourage her.  She says she is there to stay.  (If you need a shuttle driver or a stay at her hostel, be advised that she is quite a talker and will teach you some poems and songs about the mountains.) 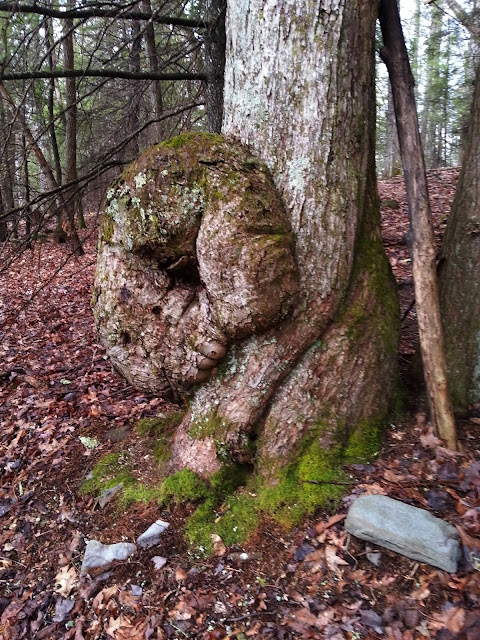 The end of March can be a bland time for hiking, well past the snow and ice and before spring green and flowers emerge.  There was a sprinkling of purple and yellow violets and some serviceberry, but nothing else blooming. That’s when you look for strange tree formations. 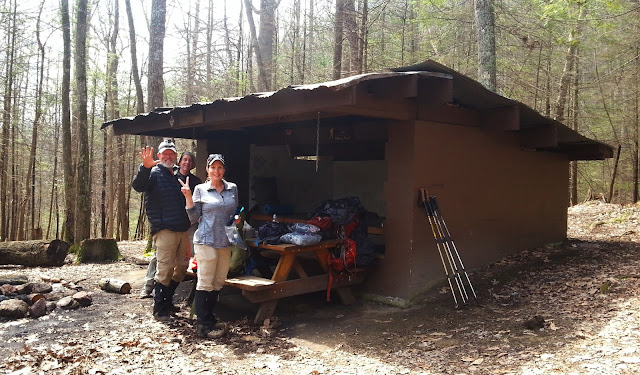 Carol was also on the lookout for thru-hikers.  She was a traveling trail angel, handing out monster cookies to these three stopping for an early lunch at No Business Knob Shelter. She recorded everyone’s trail names and they compared notes about their hiking experiences so far. 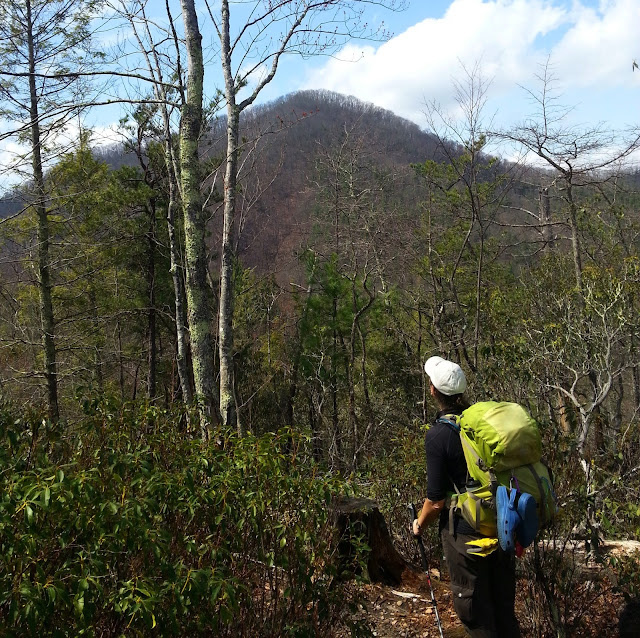 Carol seems to be happy to be back on the trail 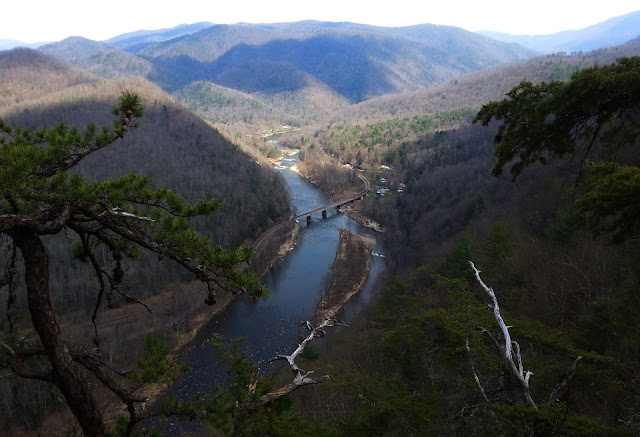 The Nolichucky River flows from the slopes of Mount Mitchell in NC, the highest point east of the Mississippi, through the town of Erwin, TN. 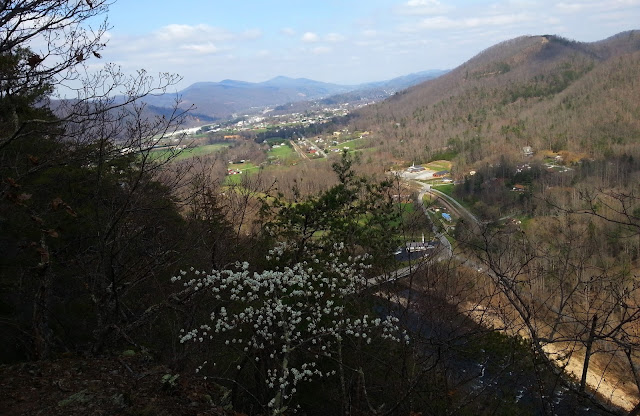 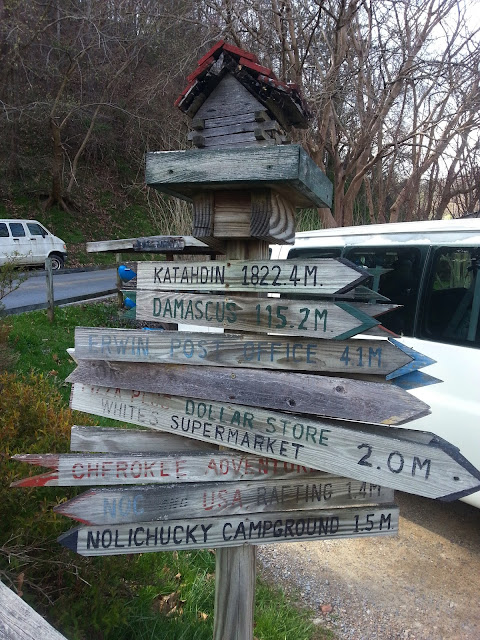 Sign at Uncle Johnny’s, a popular hostel at the edge of town 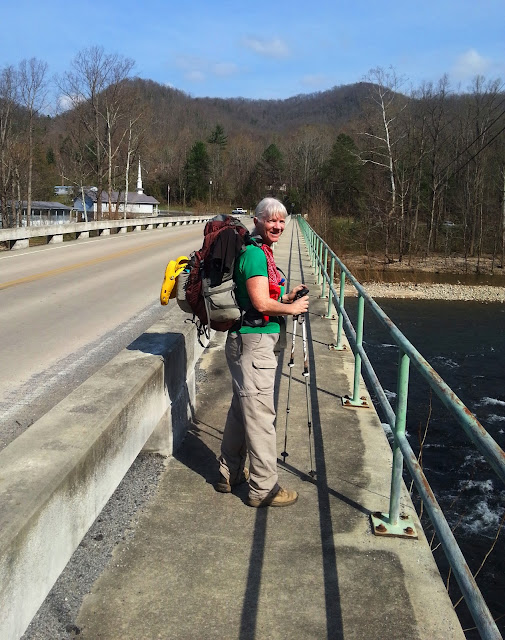 On the Chestoa Bridge crossing the Nolichucky.  From this point the AT meanders into Jones Branch Valley, but don’t be lulled into complacency.  After multiple footbridge crossings of Jones Branch, the trail sidehills steeply up Nolichucky River Gorge, sometimes on steps carved from the rock.  No photos and no talking, thanks.

At the top of the climb was our goal for the day, Curley Maple Gap Shelter.  I was a little dismayed to see several tents already set up, adults chatting by the fire pit and children running around, too many to count (6? 7?).  Carol and I claimed spots on the bottom floor and made acquaintance with two 20-something thrus, a guy called Crumb Bum and a woman called Doodle.

I couldn’t discern exactly which kids belonged to which adults and I felt apprehensive about how rowdy the kids would be.  But the adults proved to be very friendly and were allowing the kids to explore freely, climbing trees and splashing in the little creek and making up games to play.  The adults didn’t fuss and the kids didn’t whine.  No electronics anywhere. 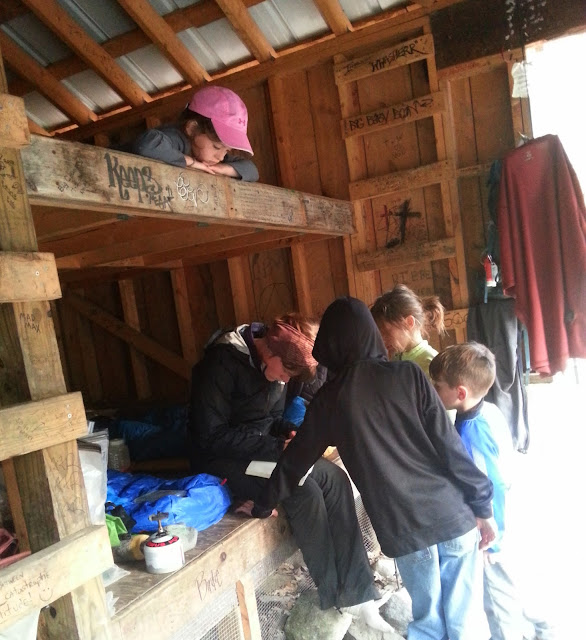 The kids were fascinated with Doodle, whose trail name was a nod to her love of drawing.  As she sketched, they huddled around and made suggestions of subjects. 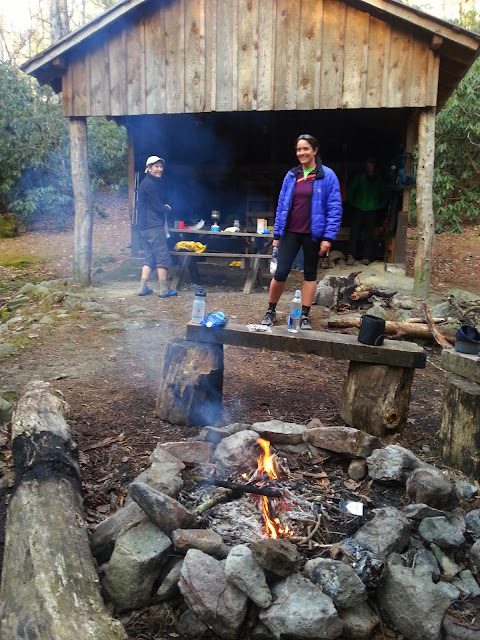 It’s a safe bet that when you share a shelter or campsite with other hikers, someone will build a fire which you then get to enjoy without the responsibility.

Carol and I ate and nested and prepared a bit for the next day.  At about 8:30 all the kids suddenly crashed and their parents shooed them off to their tents, after which not a peep was heard from them.  Wow.  When I snuggled into my own sleeping bag, a couple of adults were still at the fire, talking in low voices.  I don’t know when they turned in.

Around 10:30 p.m., though, a bit of commotion woke me suddenly. Turned out to be two female backpackers arriving late, climbing up to the top floor and rustling around to get settled.  Otherwise a chill and restful night.

Posted by smoky scout at 5:09 PM No comments: