Did I mention that I’ve set a new yearlong hiking challenge?  The goal is 60 hikes between my 60th and 61st birthdays. That’s 5 hiking days per month, which seems pretty impossible considering my work schedule and winter weather, so I’ve set some generous parameters. First of all, I’m fudging the start date as of 4/1/18. Second, a four-mile minimum. Third, it counts if it’s a real trail that I’ve done before (looking at you, Crowders Mountain) but I won’t blog about it. Fourth, local greenways in the flatlands count as long as they are new to me. I’ll dialing into the Carolina Thread Trail network for new greenways…but more about that in a later post.

Today’s hike was bonafide, new to me, 6 miles of real trail, and waterfalls!  A great sunny, solo Friday hike.

Mountain Bridge Wilderness Area - In the mountains (yes, mountains!) of Upstate South Carolina, this area encompasses more than 10,000 acres of cove hardwood forest and includes two state parks, Caesar's Head SP and Jones Gap SP. “Mountain Bridge” refers to the two watersheds within its protected boundaries, the Table Rock watershed and the Poinsett watershed, and as you can guess, waterfalls abound.

The Palmetto Trail – South Carolina’s cross-state trail in progress, 500 miles of hiking and biking when completed. The trail consists of 26 passages (sections). An excellent website is here.

Are you with me so far?

I’ve known about Jones Gap State Park but had never set foot in it until today. I’ve hiked to Raven Cliff Falls at her sister park, Caesar’s Head, a couple of times in my early days. Today was all about Rainbow Falls, on the Waterfalls 100 Challenge list. It’s on the property of YMCA Camp Greenville (adjoining the park) and until recent years the camp granted access to hikers.  Now a trail within the park connects to the camp’s trail, creating a longer hike experience.  The out-and-back to the falls is very straightforward, one turn, about 5 miles round trip. 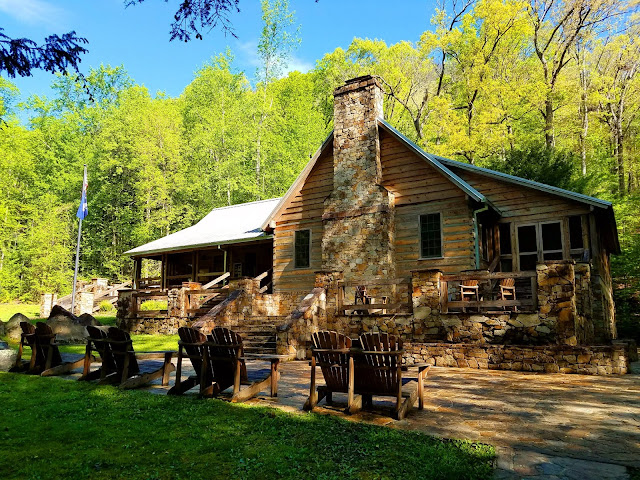 Starting from the visitor center, blue-blazed Jones Gap Trail gentle rises upstream alongside the Middle Saluda River. After about a mile, I turned right onto red-blazed Rainbow Falls Trail, crossed the Middle Saluda, and got a workout with a 1,000-foot elevation gain in 1.6 miles. Spring green was bustin’ out everywhere and wildflowers were abundant. Several times this trail crosses Cox Camp Creek, the source of Rainbow Falls, as it flows to intersect Middle Saluda. Cox Camp Creek isn’t remarkable until you realize that this amazing waterfall comes from that unremarkable creek. 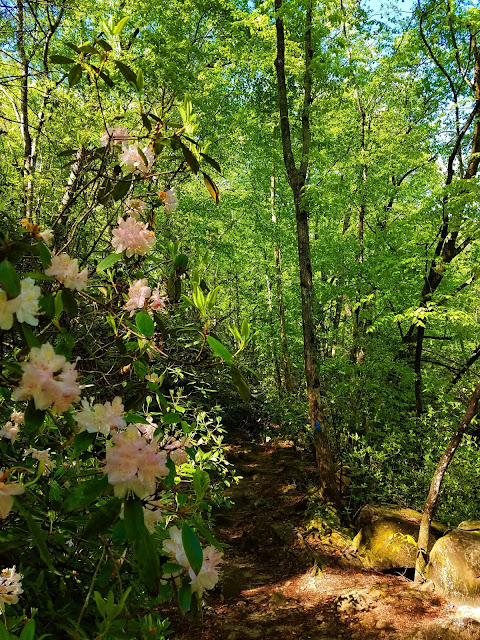 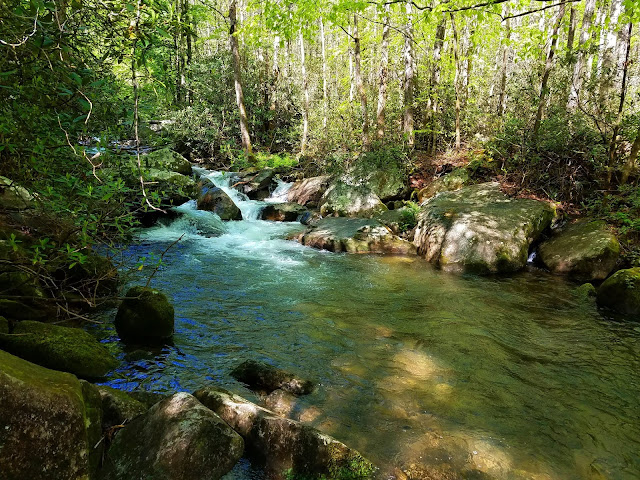 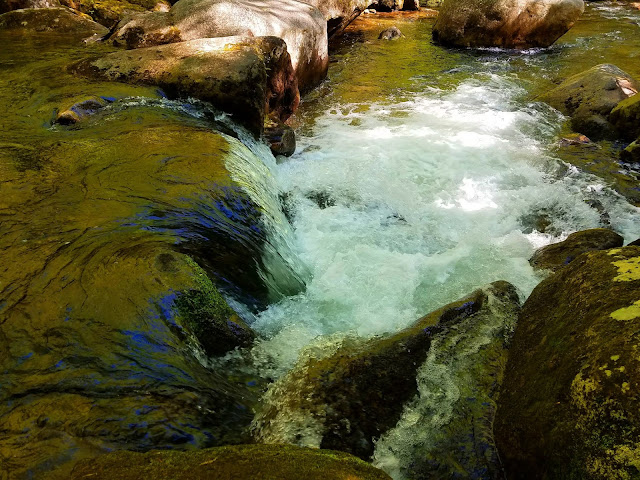 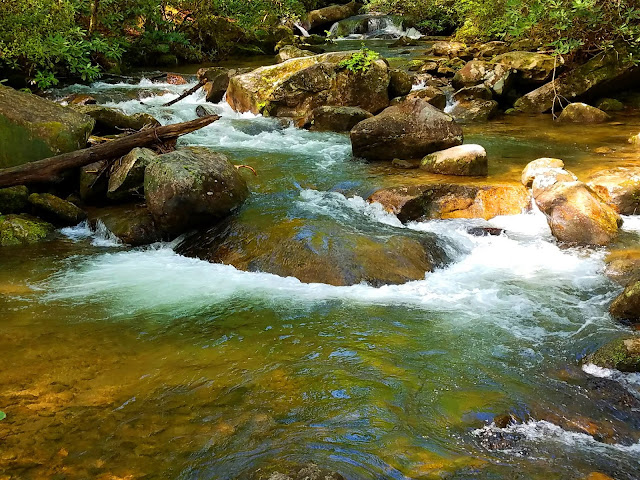 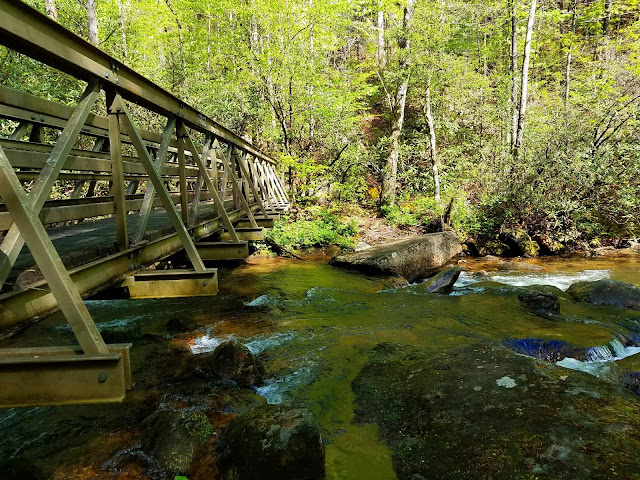 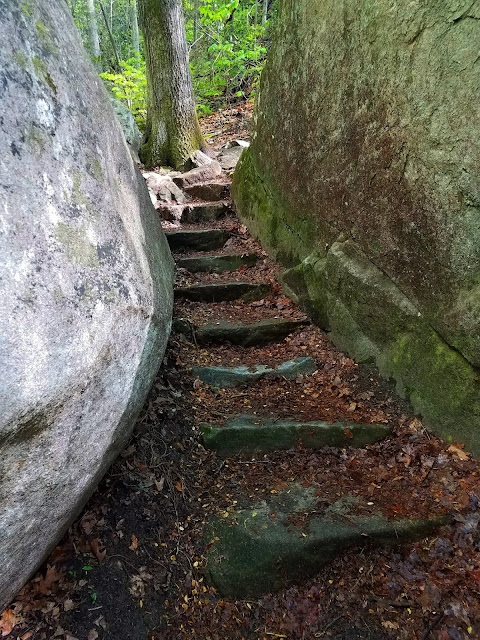 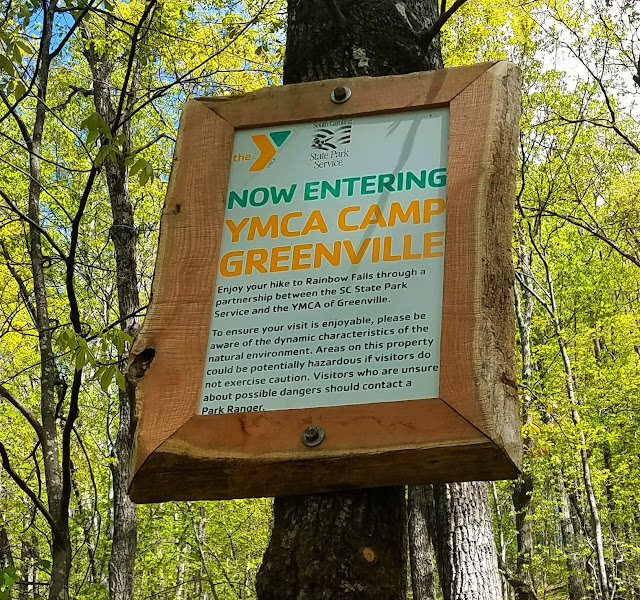 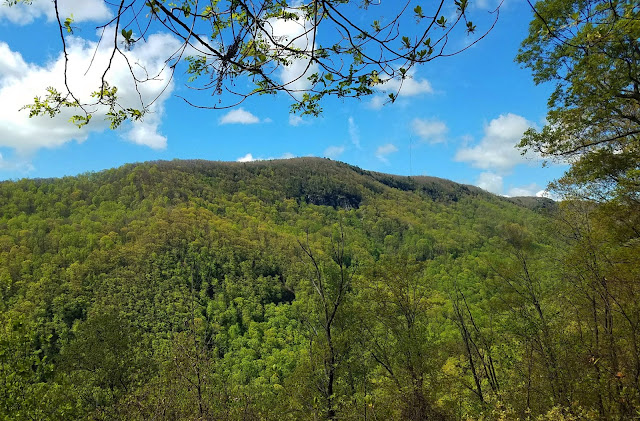 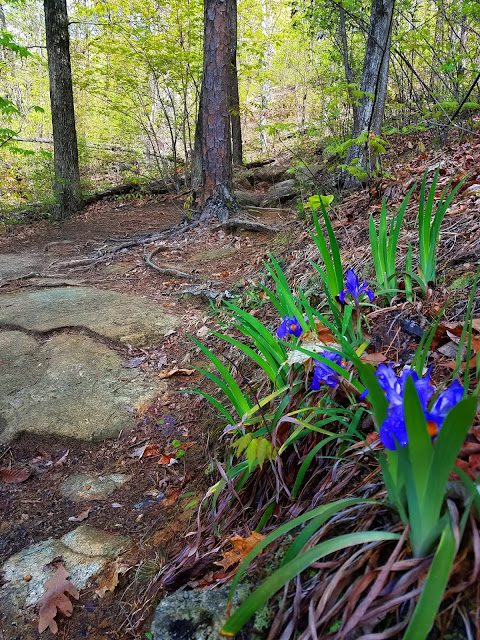 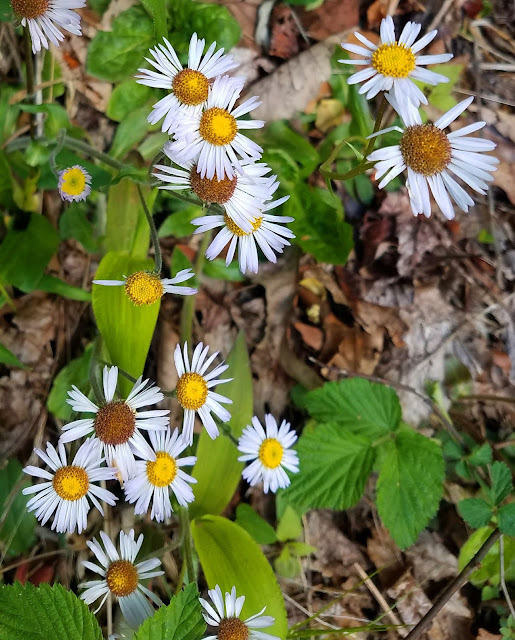 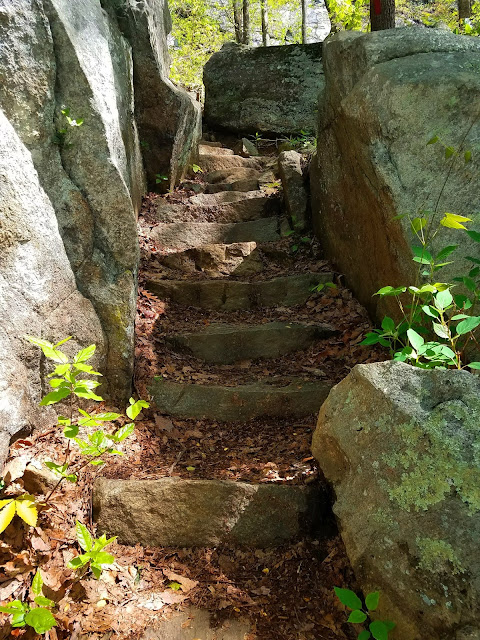 The trail ascended steadily up and to the right, then made a sharp left turn to trace the ins and outs of coves approaching the waterfall.  I passed two young women hiking back down, one carrying a fat happy baby in a backpack, and hoped that there was no one else at the falls (there wasn’t). I could hear the thunder long before I saw it. 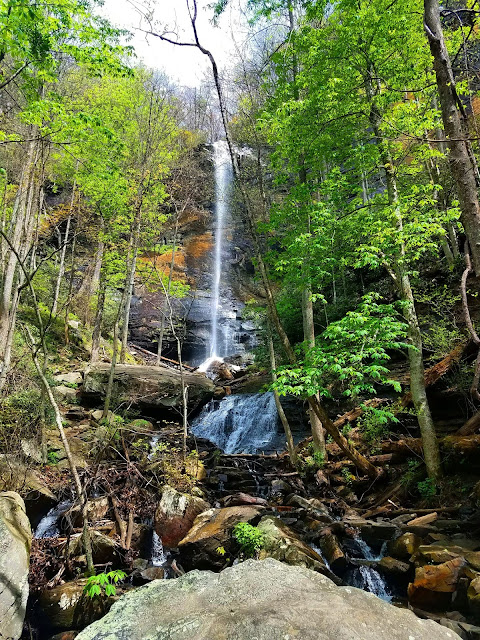 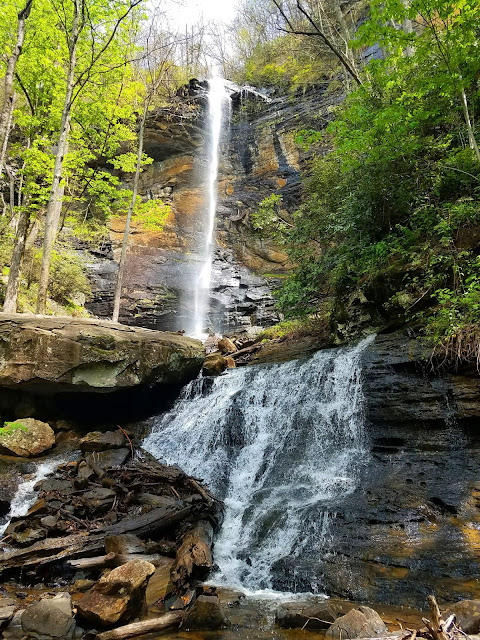 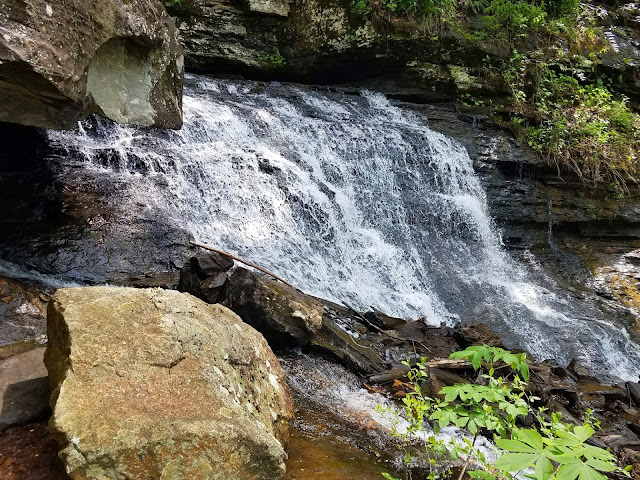 So, so, so powerful! The relentless pounding of rushing water overpowers to the point where it’s not even loud, it’s just there.  If you’re alone, it is part of the background as you sit and watch cascades repeat and repeat and repeat, and you think you hear the trickle of the flow near your feet.  If another person is present and you see their mouth moving but hear no words, you are brought back to the roar of the water again. 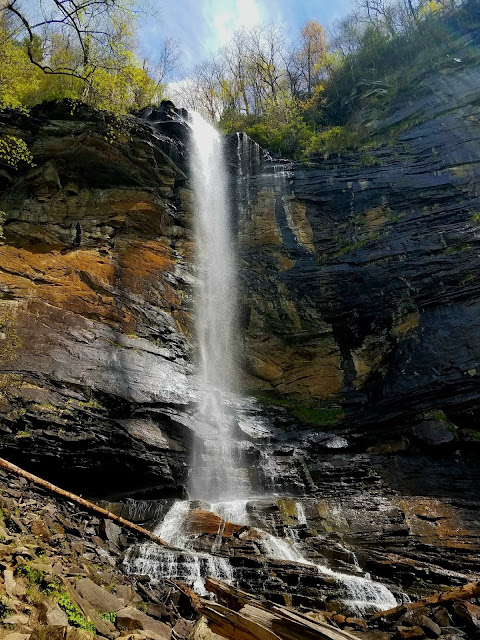 My return hike along the same route reiterated that each moment in life is unique if you pay attention.  Same trail, same day, even the same hour, but from a different viewpoint, and new flowers have sprung up. 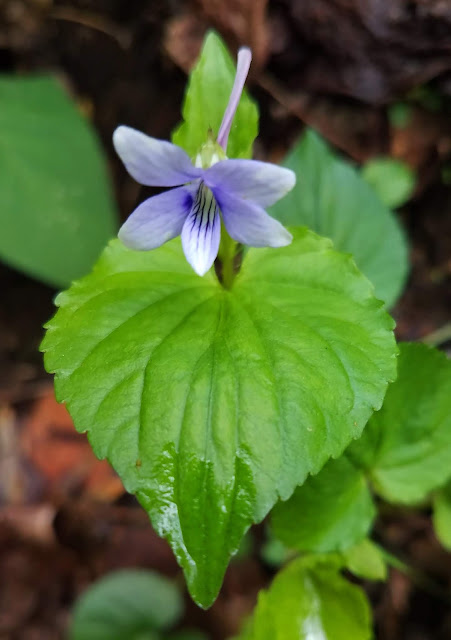 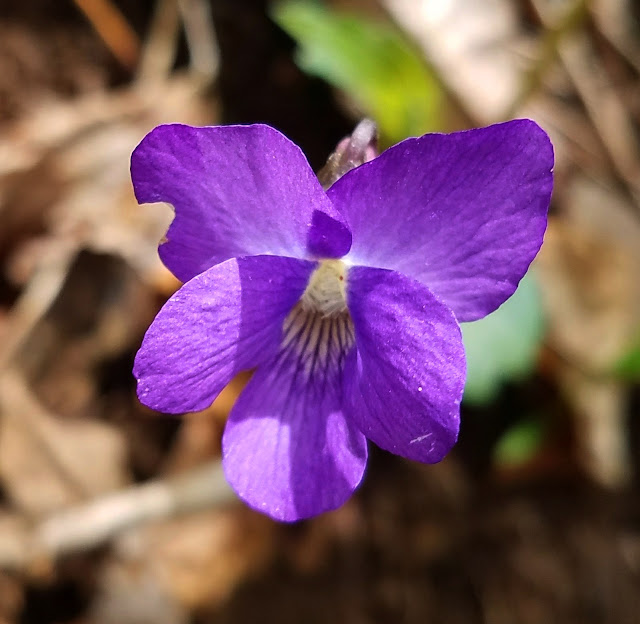 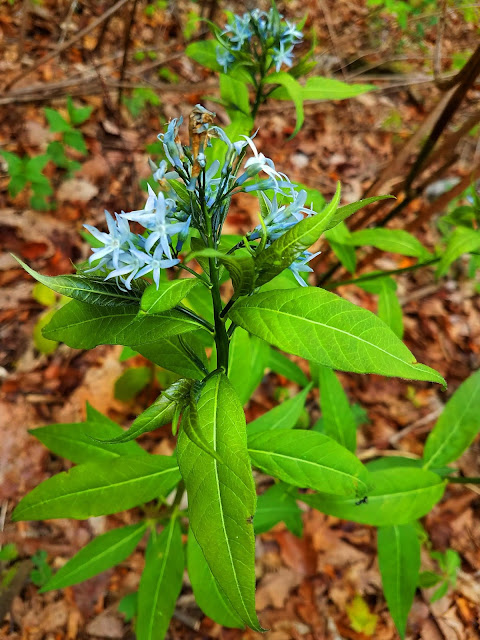 Amsonia willow (Bluestar?) This one was new to me 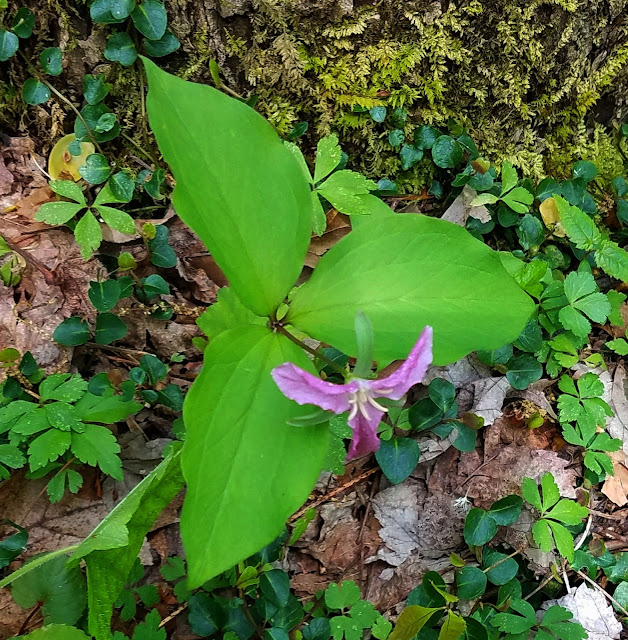 Large-flowered trillium – or a fading Catesby’s? 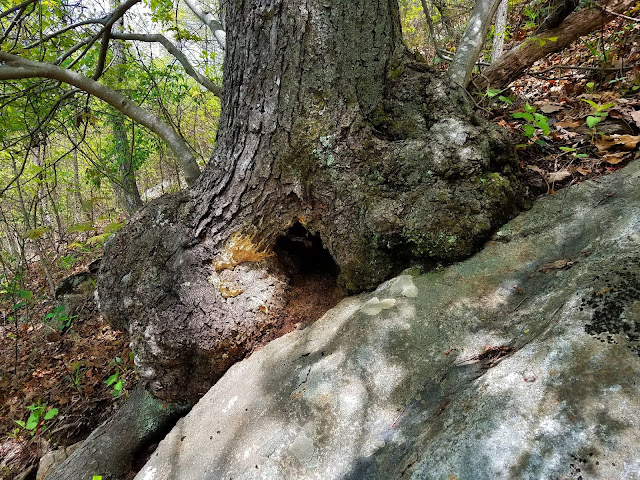 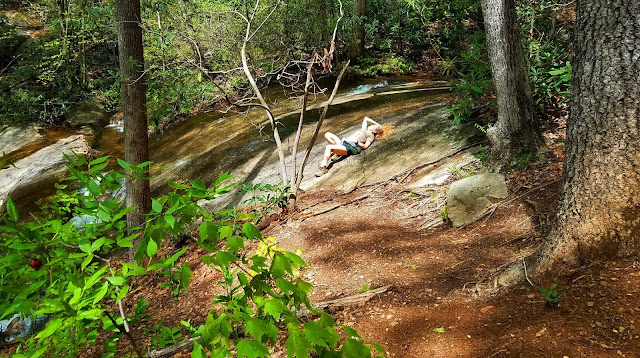 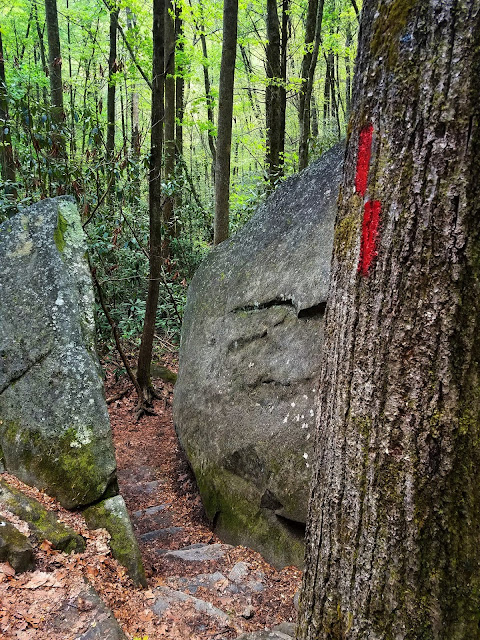 Back at the intersection, I turned right to continue on Jones Gap Trail (aka the Palmetto Trail). 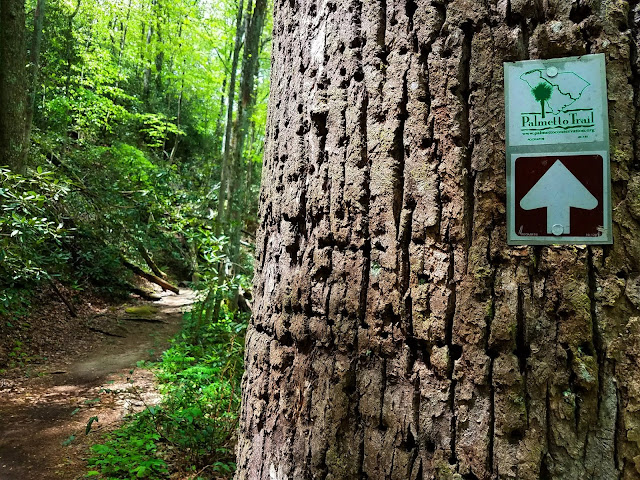 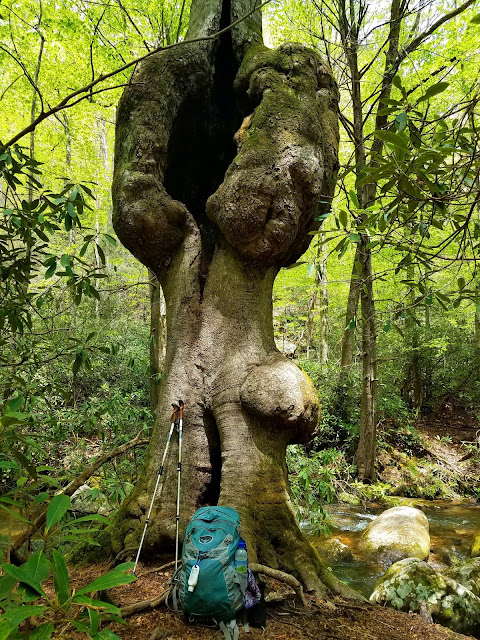 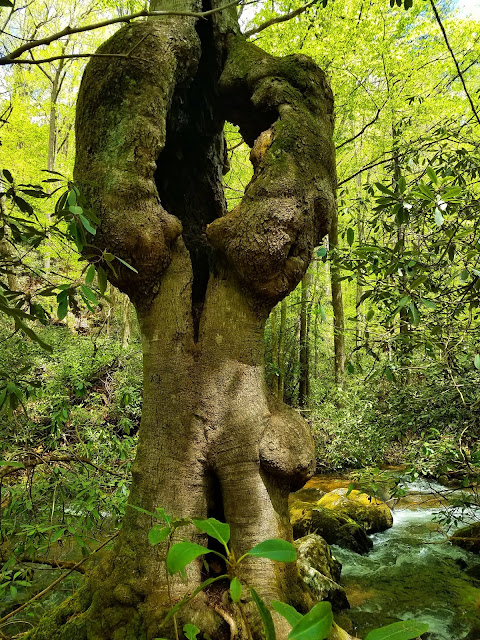 Ten minutes later I arrived at Jones Gap Falls, in solitude again at this 50-foot cascading gem with an inviting pool at its base. [I’m telling you, take a Friday off and avoid the masses. You will not be sorry you missed a day at work.] 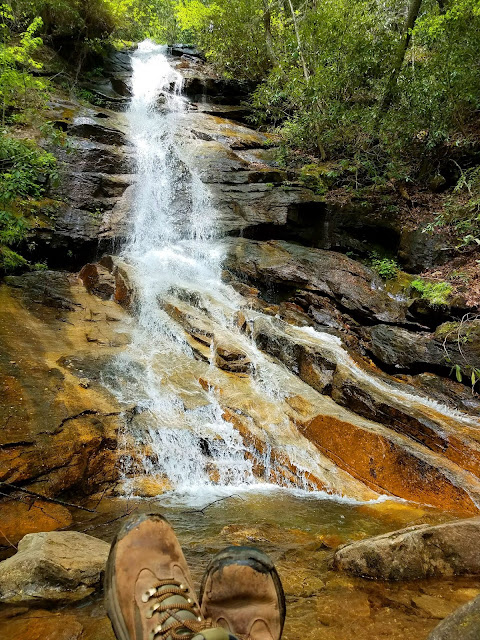 Again, the gentle stroll back the way I came was a whole new experience – and what to my wondering eyes should appear but Jack-in-the-pulpits!  The blooms are small, low to the ground, hidden underneath spring leaves, but once you’ve seen one, you’ll see a bunch. Spotting a single blossom of any flower gets me excited and finding a dozen in close proximity is thrilling. 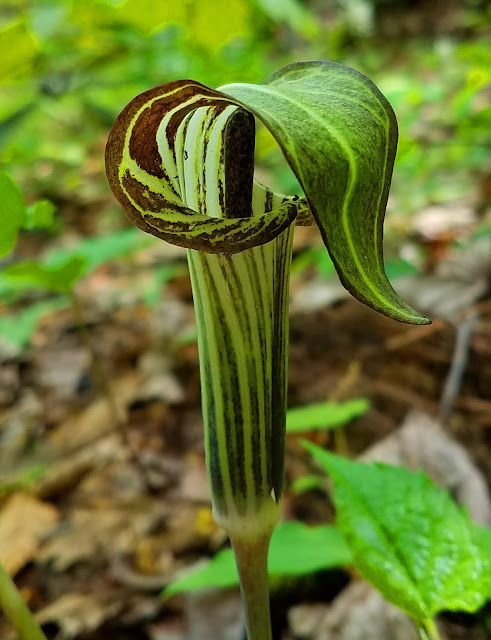 Near the parking area, the finishing touch to my hike was a large patch of Eastern Sweetshrub, also called Carolina Allspice for its blooms’ spicy fragrance.  My personal opinion: the blossoms look like creepy burgundy-red spiders.  I am fascinated by them. 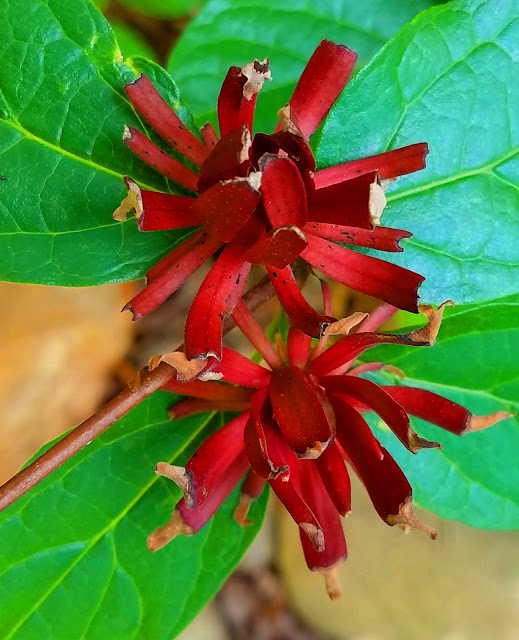 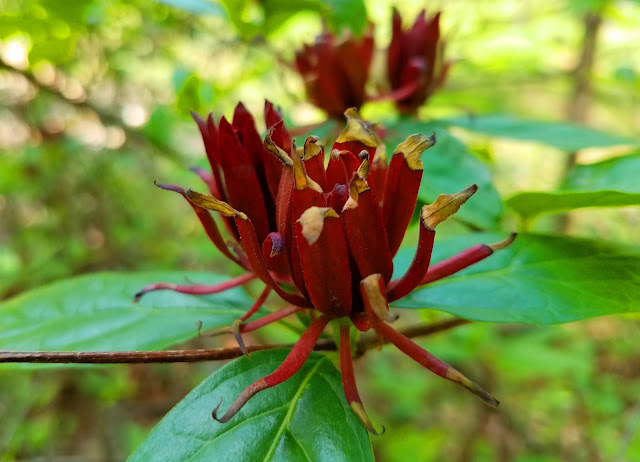 “This is a wonderful day. I’ve never seen this one before.”  ~Maya Angelou