Another Tylenol PM night with a different result – no headache this morning!  And a good thing because today was going to be our longest hike, going from 10th Mountain Hut to Uncle Bud’s Hut via a hybrid route of cross-country ski trails and the CDT (which still runs concurrently with the Colorado Trail).  What will this be like?  A great deal of variety in topography and landscape and challenges – a terrific day.

Yesterday’s precipitation left a light frost everywhere.  This bench bears a plaque naming it “Catherine’s Bench”, in memory of a 29-year-old woman who loved hiking and skiing in the Colorado Mountains.  She was killed by a lightning strike while hiking up one of the 14er’s.  Her family installed a “Catherine’s Bench” at each of the 10th Mountain huts. 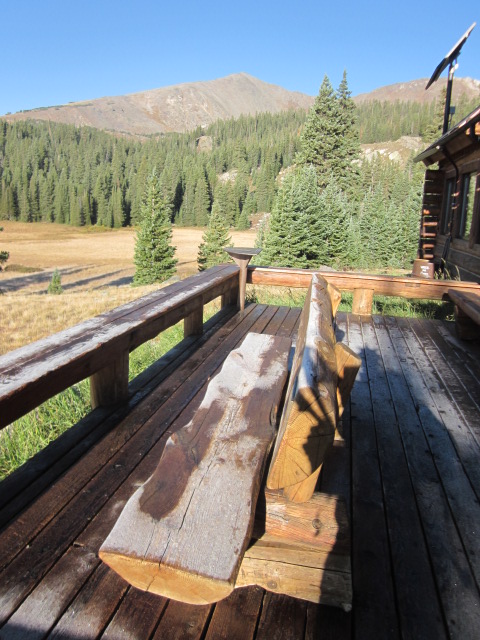 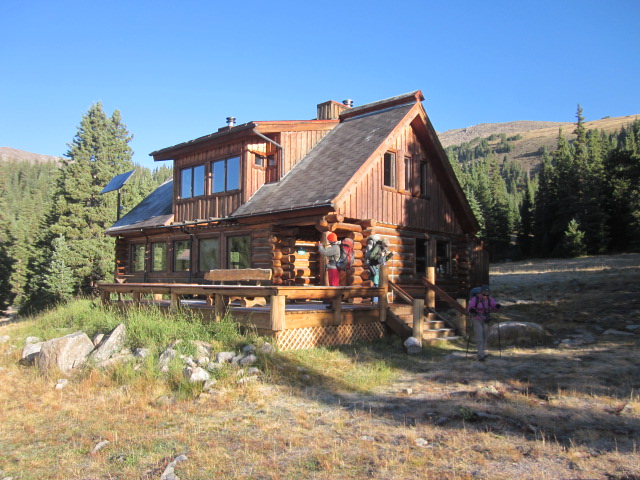 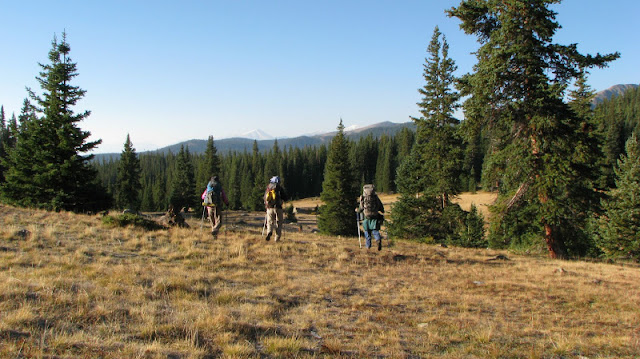 Buebird skies and 28 degrees.  Ready for whatever comes next (Jeff’s photo)

The first couple of miles consisted of backtracking, with Cathy and me in front as route finders searching for those blue diamond trail markers (Cathy says “Blue diamonds are a girl’s best friend”). 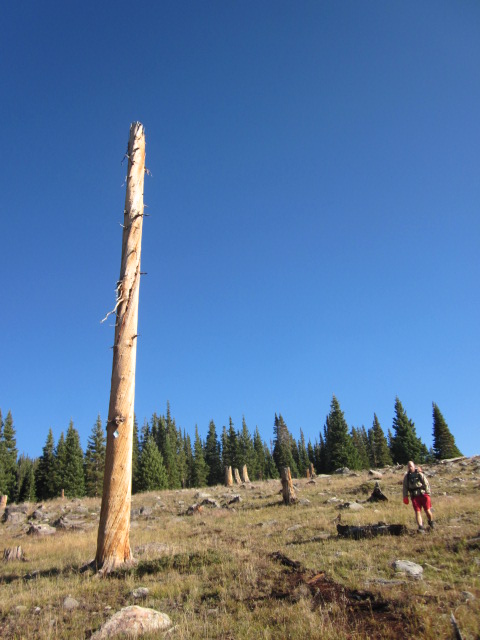 A giant landmark that we remembered 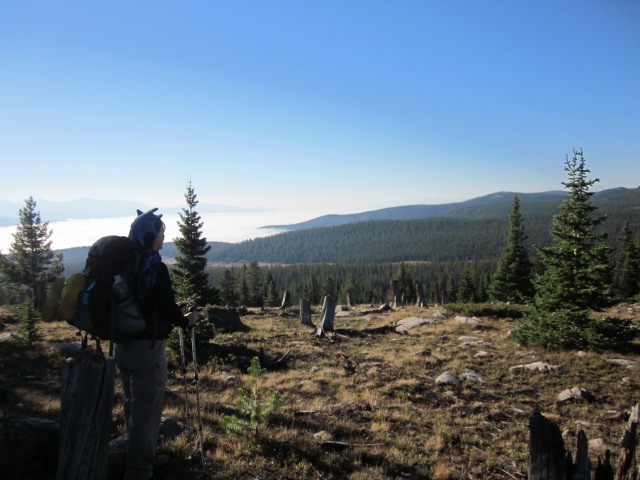 Clouds in the valley where the town of Leadville sits 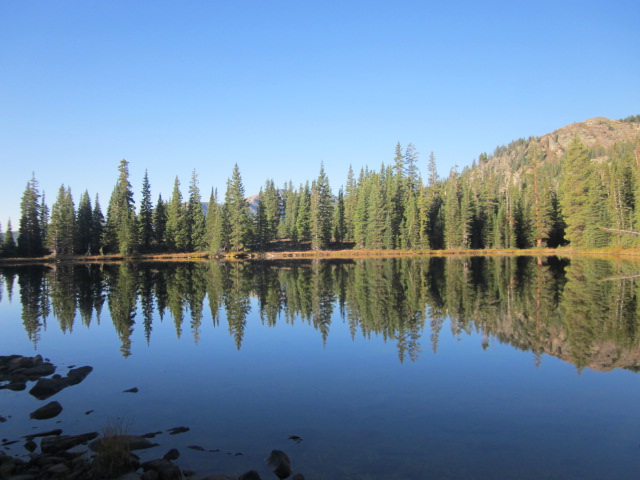 A day of “reflection”

We crossed the intersection with West Tennessee Lakes Trail and continued on the cross-country ski route, increasingly confident of our navigational skills until we came to a very large meadow.  I’m sure in winter it’s pretty simple to look across a white expanse the length of a football field and spot a 10-inch blue diamond nailed 25 feet up on an evergreen tree…but not today.  We needed to cross the meadow and then scout along the tree line to find a trail marker.  Looks simple enough, right? 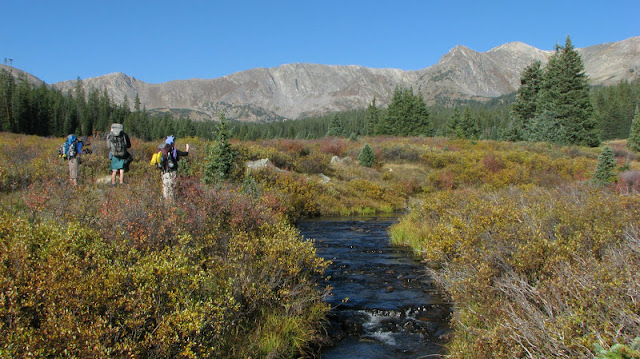 But those low bushes and grasses are actually waist high and very dense, with marshy spots you might not see before splashing into them with both feet.  We began following a promising trail that ultimately meandered all around until we concluded that it was an animal trail, not a people trail.  There was no straight route across the meadow.  We pretended to be Moses and the chosen people wandering in the wilderness.  In spite of the slow process, I really enjoyed this interlude.  The terrain was flat, the colors were spectacular and I had that feeling of a very small being in God’s great big world. 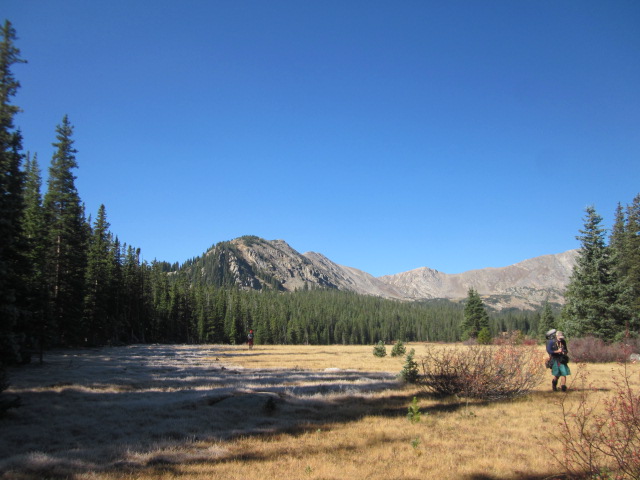 Next we passed another small pond and walked through a narrow meadow still partially in shadow with lovely frost patterns. 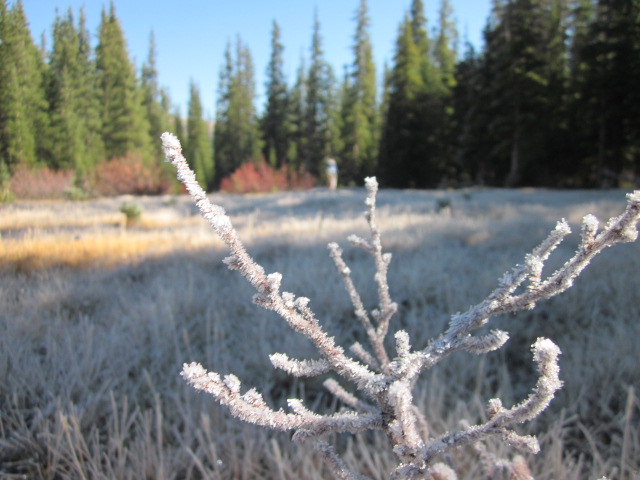 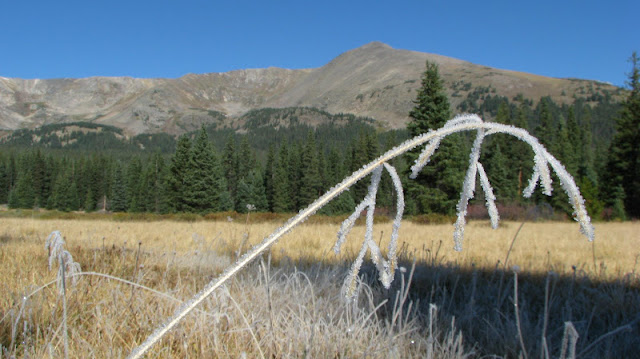 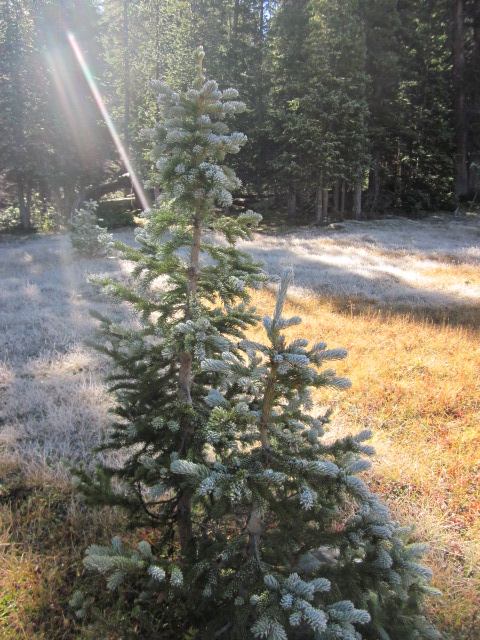 Couldn’t resist this tiny Christmas tree with a sunbeam spotlight 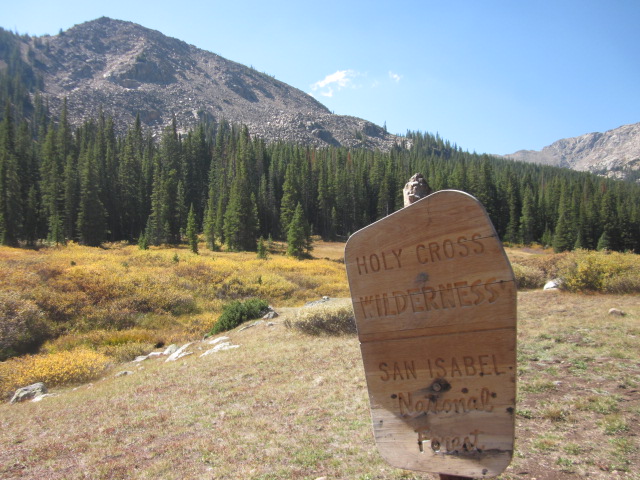 When we reached the CDT we turned right for a couple of miles of pure delight, a rockin’ and rollin’ level trail through Longs Gulch, and then entered Holy Cross Wilderness. 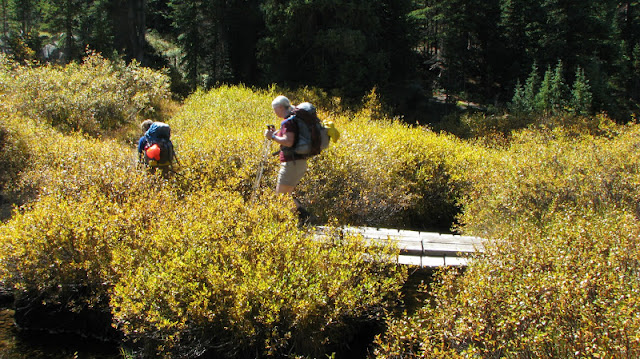 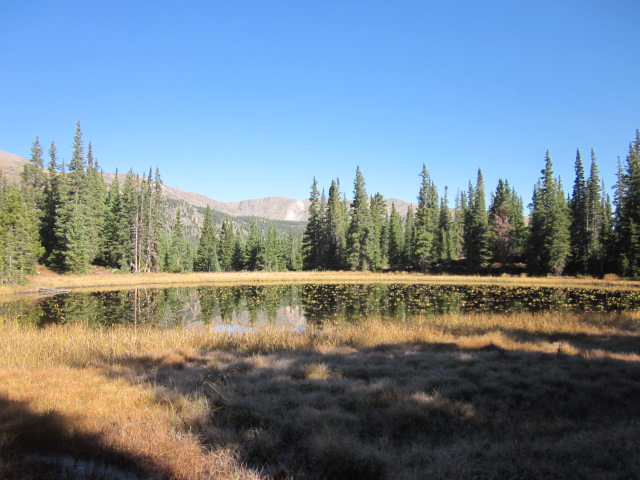 Our biggest climb of the day tested my lung capacity yet again, 35 minutes of steepness, and I persevered (very) slowly and steadily but without stopping.  I was still not loving the climbs but I was conquering them.

At the top of the climb we reached the pass between Galena Mountain and an unnamed peak that Jeff wanted to bag.  There were two beautiful small unnamed lakes to explore.  But first…time for refueling.  What a spectacular setting for lunch! 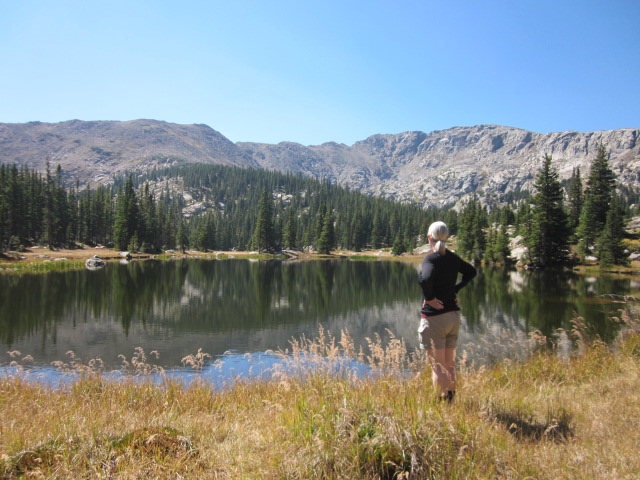 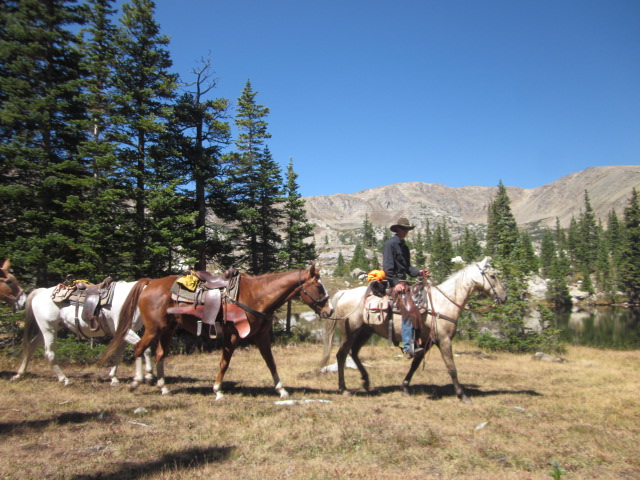 Horses passing through to pick up a crew of fishermen camping out at the lake. 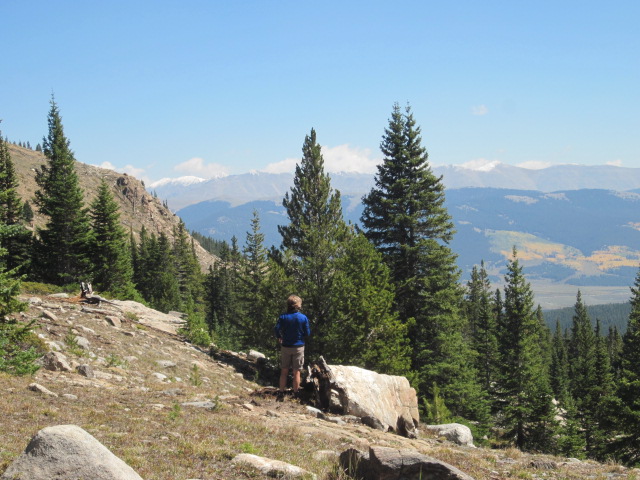 Cathy and I explored a little bit over the next ridge – a view of everything coming up, snowy peaks and yellow aspens. 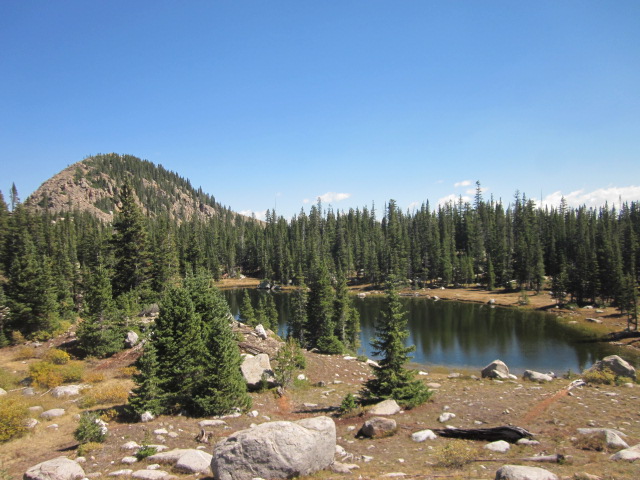 During our rest stop Mike gave Cathy and me a tutorial on reading topo lines on a map, helping us understand what was ahead (some up, some down, surprise!).  When Jeff returned, we got back on the CDT. 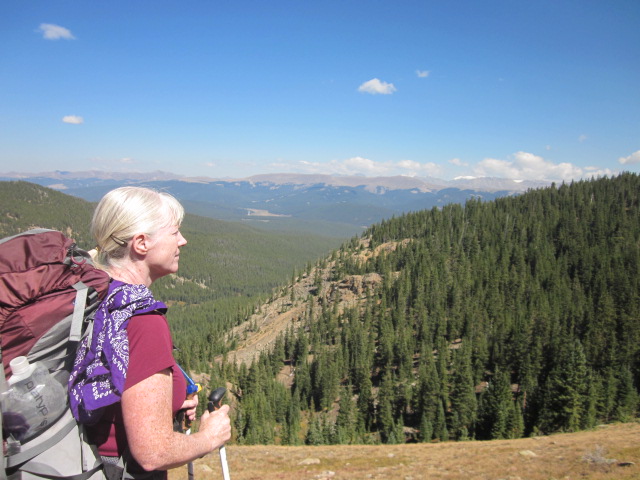 Across this open pass we had our best view of the day.  At this point Jeff and Cathy were ahead and Mike wasn’t sure if he had told them the next stopping point.  Mike wanted to depart from the trail again and try a different route for the final approach to Uncle Bud’s Hut.  He decided that they would figure it out for themselves (Jeff had the GPS track) and so he stepped off the CDT in search of this alternate route, an old road.  I followed Mike – I wasn’t about to get left behind anywhere. 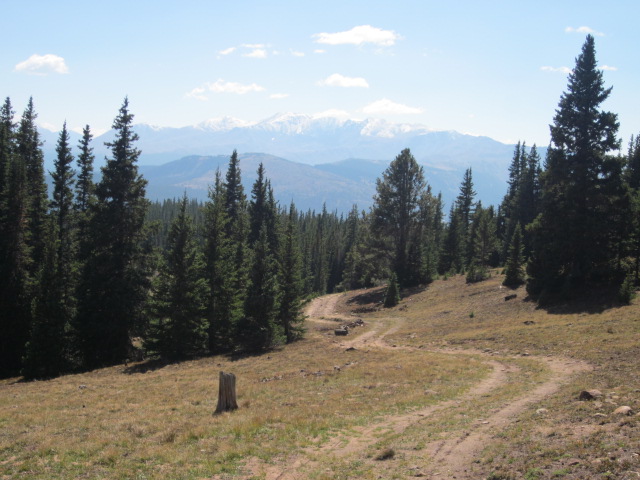 We found the old road that Mike remember- ed and it took us about a mile down to Uncle Bud’s.  Jeff and Cathy were already there.  And our Washington, D.C. hut buddies evidently had made it there the day before because they left us a note and some marshmallows! 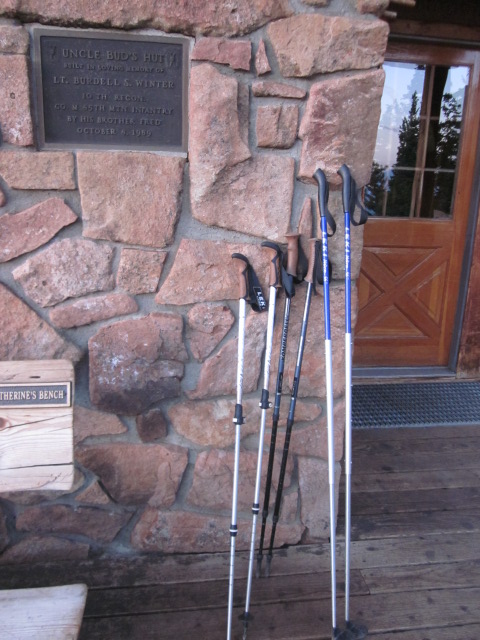 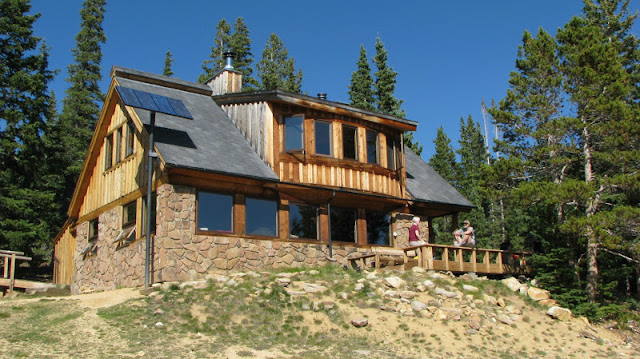 Once again we are the only residents 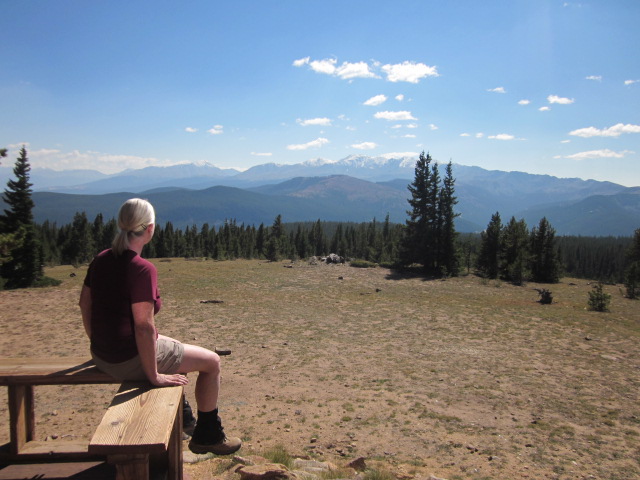 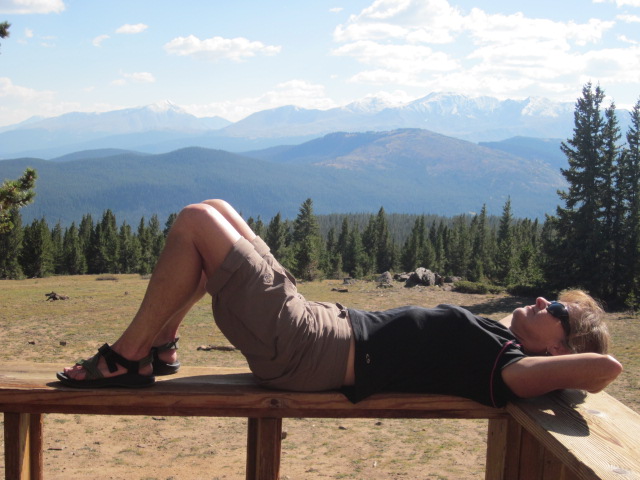 Cathy is trying to relax (and succeeding) 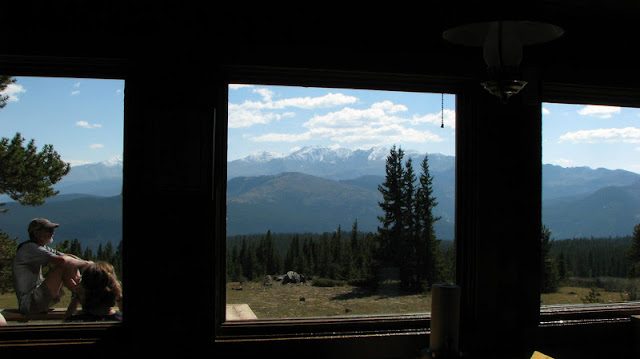 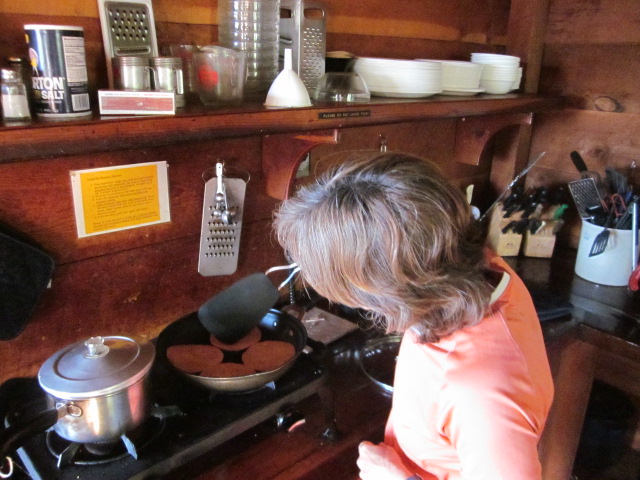 Toasting some bread for dinner


Another gourmet feast:  spinach and cheese tortellini, the last pound of Jeff’s frozen peas, chopped up pepperoni and sausage.  Believe it or not, we actually had leftovers tonight that will reappear tomorrow night. 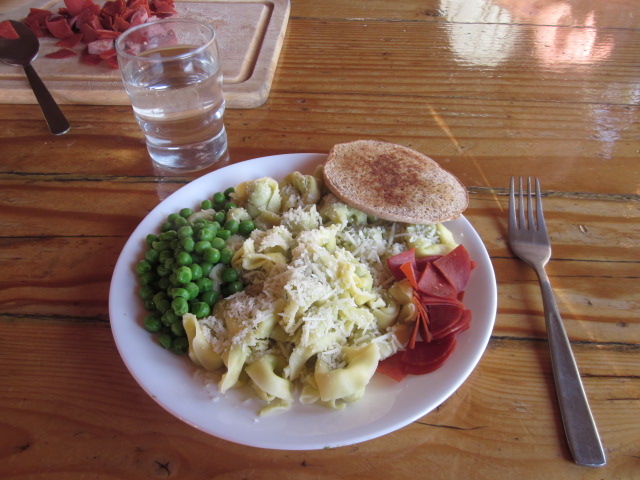 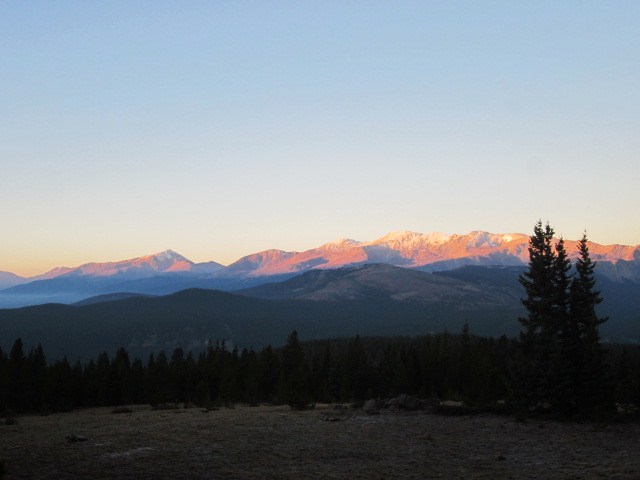 Sitting at the front windows, we watched until the light faded to almost full dark before turning on lights inside.  We sat and talked and read aloud a couple of tales from a book of local stories.  Before bedtime we went back out on the deck to gaze at the sky full of twinkling stars and the Milky Way arcing over our heads.  Sigh… I wish everyone could have these kinds of experiences.