I Hate Backpacking and This Is My Last Trip

We got up at early light and were packed up and on the trail before 8:00 a.m. Looming large was the big crossing of Hazel Creek on the Cold Spring Gap Trail, a nice cold splash to wake us up. As we walked out of camp, we stopped to chat with the two guys who came in after dark. They reported that they had hiked up to High Rocks (part of our route coming up) and back and “got kind of a late start.” They also said that the crossing of Hazel Creek wasn’t too bad. Everything is relative, of course…

We walked 1.3 miles back up Hazel Creek Trail and turned right onto Cold Spring Gap. At .3 miles was our last crossing of Hazel Creek for this trip. From April of '08 I remembered it as wide and deep. The “brown book” says that it is about 10 yards wide and the depth varies from 3 to 4 feet in winter to 1 to 2 feet in drier times. “Consequently, this crossing can be a refreshing interlude or a potential nightmare.” 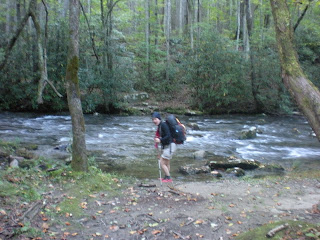 Apparently my camera set itself to some terrible setting because most of my photos of this day are fuzzy, but I think you can see Judy’s expression as she begins the crossing.

Turns out it was about mid-thigh, no worse than a couple of our crossings from the day before. We put our socks and boots back on and began the 2,000-foot climb up the 3.5-mile Cold Spring Gap Trail.

Some of you may remember my summaries from my Smokies 900 year where Cold Spring Gap was named as one of the don’t-make-me-go-back-there-again trails. Now, optimists would say that Cold Spring Gap is “fu 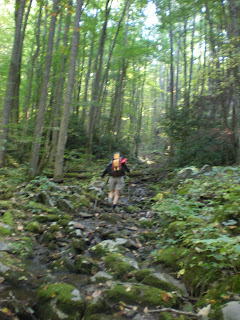 ll of inspiring challenges” and pessimists would say it is “the worst trail EVER”. As a realist, I have to say that any day in the woods is a good day, but this trail is horrible. Some of it is an old logging railroad bed, but not like the other ones I have experienced. It follows Cold Spring Branch for part of the way, meaning that after the rains earlier in the week we were creek walking. The trail is extremely rocky, rutted, muddy where it’s not actually flowing with water, and badly eroded. More than once I had to stop and think, “Are we still on the trail?” The further we went, the steeper it got. Because it is so far into the “back of beyond,” anyone who hikes this trail is hopefully prepared for an arduous climb. There is not one single step of down. I shook my head at the prospect of those guys hiking up it AND then back down it in the near-dark on their round trip visit to High Rocks.

Shouts of hallelujah as we arrived at the gap, where Welch Ridge Trail begins with a left turn. Looking to the right here, however, we could discern a faint manway that I later learned was once a maintained trail down to Bear Creek. But our route took us left onto Welch Ridge and we climbed .6 miles to the intersection with another signed (but unmaintained) trail to High Rocks.

High Rocks is the site of a long-removed fire tower, but the view is still there. The short trail up seemed endless as we fought our way through more blackberry brambles and overgrowth. We topped out at the rocky bluff upon which the tower once stood. The foundation and the caretaker’s cabin remain, although the cabin is extremely deteriorated and there are currently no plans to rehab it. Since I was here last year, someone has made a statement by placing a chair on top of the rocks, inviting valiant hikers to pause and enjoy. The best seat in the house 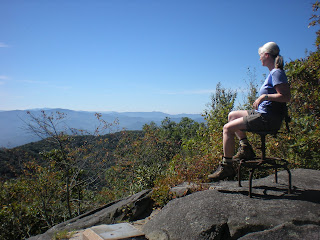 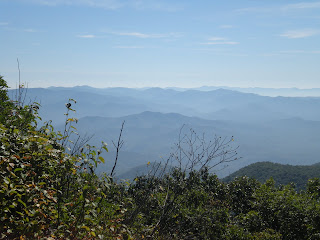 What I saw from where I sat


Judy and I enjoyed lunch and a rest here, glad to be done with Cold Spring Gap, but you know the Robert Frost mantra by now: miles to go before we sleep. We thrashed our way back down the jungle trail to Welch Ridge, turned left once again, and began the long hard pull ever upward.

Welch Ridge is 7.3 miles long and we w 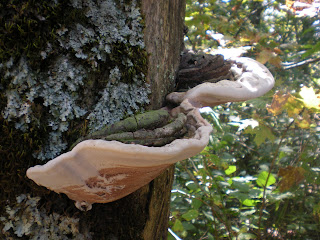 alked every inch. There really is some down to it, such as at Water Oak Gap, and there are some level sections. There are magnificent old trees that were missed by logging, and more cool fungi. There was also more undergrowth than I expected, and no rhyme or reason to when it would crop up and when it would disappear. Thorns tore at my clothes and at least half a dozen times my shoelaces were pulled loose by blackberry brambles (will never leave my gaiters at home again). We really don’t appreciate trail maintainers until we encounter an example like this where maintenance is lacking. I suppose that’s a clue that I should volunteer to do trail maintenance here next summer… 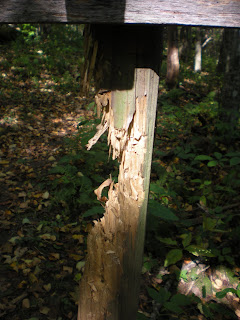 To break up the monotony, Welch Ridge Trail is intersected often by other trails. I’ve found that hiking more than 4 miles without a landmark drives me crazy. At the intersection with Hazel Creek Trail again, I noticed that something had been chewing on the signpost. I didn’t remember seeing this the day before… 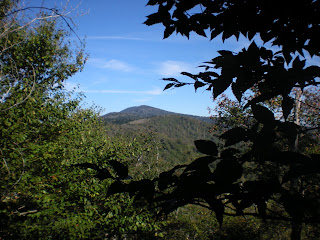 On this last pull up Welch Ridge we began to catch glimpses of our destination: Clingmans Dome. Can you tell how far away it is? Seems like mile 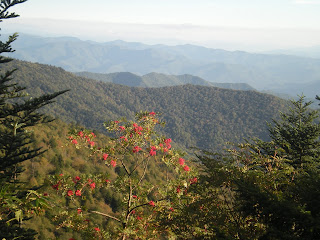 s…well, yeah, it is…but look how pretty the mountain ash berries still are.

Every hike begins with optimism, a spring in the step, an anticipation of what’s around the bend. If the hike is the right distance, it ends on the same note as it started. If it is a little longer, the hiker loses a little steam but finishes feeling that he/she has met the challenge. If it is a lot longer, the body begins to tire, the pack gets heavier and the pace slows down. There is no way to describe the return portion of the AT to Clingman’s except as a death march. We hiked, we stopped to rest, we drank water, we ate (first backpack trip that I have eaten everything I brought), we hiked some more, and still that mountain stayed in the distance. I challenge anyone to re-measure the distance from Welch Ridge to Clingman’s Dome – it is farther than the map says! We wondered if we should have broken this trip up into 2 nights and stayed at one of the AT shelters – but we knew we would have gotten to the shelter and said, “Hey, it’s only 4 miles to the car, let’s keep going.” For that everlasting last mile I repeated to myself, “I HATE backpacking and this is my last trip.” 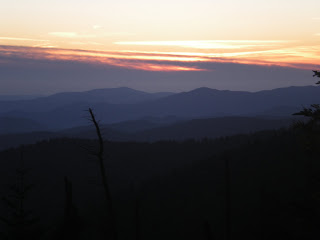 With aching knees and tired legs we walked gingerly down the paved trail from the Clingmans tower to the parking lot. Photographers were set up to capture the sunset and even we paused to appreciate it. 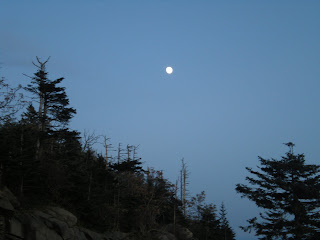 Then I looked over my shoulder and saw the full moon.

We were much later than expected and Judy’s husband was calling to check on us (see why it’s important to leave your hike plan with someone?) We drove to Judy’s house and then I stubbornly got in my car and drove home to Charlotte, arriving after midnight, in retrospect not a wise decision. Next time I’ll stay at Judy’s and drive home early in the morning.

Wait a minute…did I just say NEXT TIME???


Don't let people drive you crazy when you know it's in walking distance. ~Author Unknown
Posted by smoky scout at 3:04 PM

Great post!! Love your blog too!! Girl Scouts, Hornets' Nest Council huh? I guess we'll see y'all Saturday morning for the parade, then? If you see the banner for Cub Scout Pack 49, stop by and say hello! I'm the den Leader for den 1!

Hi Steve - I won't be at the parade Saturday but other troops will be. Have a great time!

What do you mean
"This is your last backpacking trip."
You'll probably even go back to Cold Spring.
Danny

Wow does Cold Spring Gap Trail look miserable! But once again tough gal Smoky Scout blazes 19 miles like it's nothing. Great story and pics as always. Those of that follow you know not only is it not your last backpacking trip, but you're probably out backpacking as we speak! 8)

Well, as a matter of fact, I've been backpacking twice since this trip...