MST - Day 56 – 4-19-11 – Neusiok Trail from Pine Bluff to Blackjack Lodge Shelter – 19.3 Miles
It always starts innocently, doesn’t it?  A 22-mile trail, an overnight backpack trip stopping at a shelter halfway, eastern North Carolina so no climbing – a simple walk in the woods, no?  Well…no.  (Don’t panic or skip to the end, nothing tragic happens, just an observation that every hike turns out to be different than expected.)
Danny and I met Terry and John at Oyster Point to leave cars and shuttled to Pine Cliff for our walk on the Neusiok Trail.  I was pretty excited to be hiking with these fellows whose reputations preceded them as avid trail builders, maintainers and all-around outdoor enthusiasts who could educate us about all things Neusiok.  John is 81 and Terry is 66 and both are military veterans (Korea and Vietnam).  I may have been the young’un of the group but I was not the fittest, believe me. 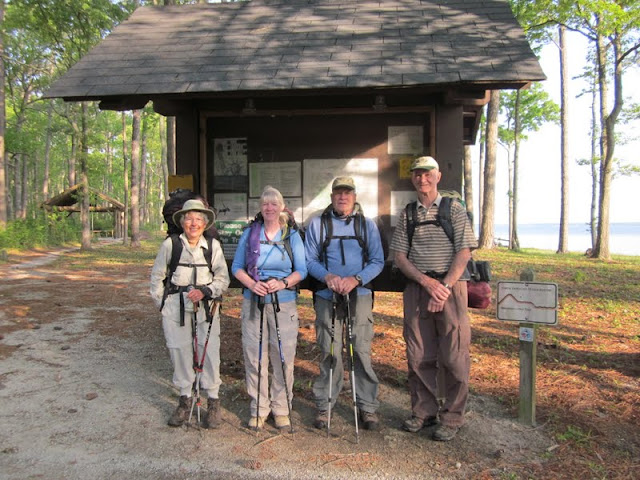 We set out on the trail at 8:00 a.m., outfitted in long pants, long sleeves, hats and a layer of bug spray as a line of defense against the insects famous in the area.  It was humid and uncomfortable and I was coated in sweat in about five minutes but kept the outfit on all day. 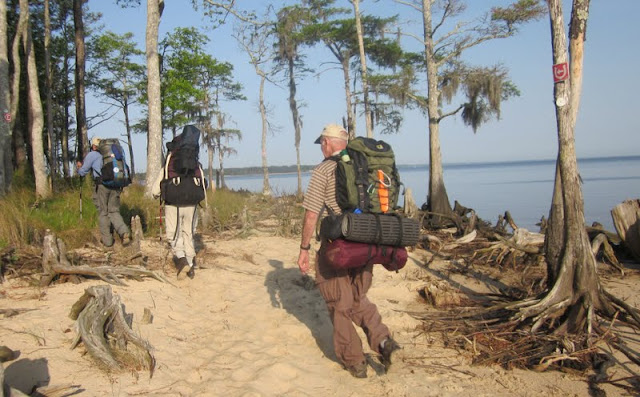 The sun was shining and almost immediately we were walking along the sandy beach of the Neuse River.  What a great beginning! 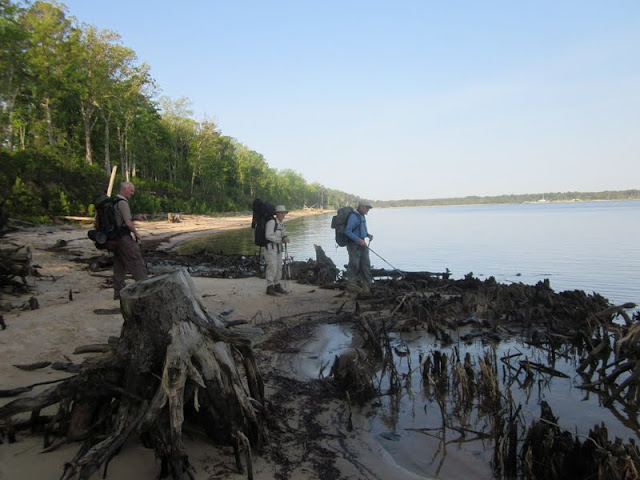 As the trail skirted the river’s edge we saw decaying cypress stumps.  An osprey flew overhead, trying to divert us from her nest and wanting us to leave. 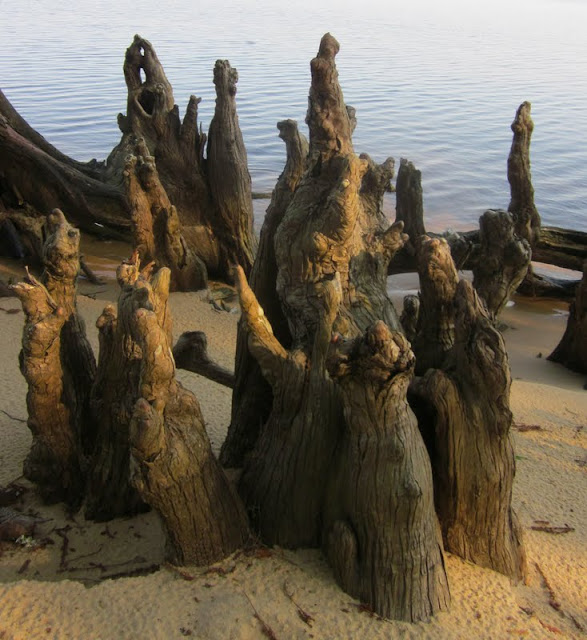 Cypress knees look like fantasy forest creatures, don’t you think?
Terry and John were walking Google guides, answering questions and volunteering information about absolutely everything along the trail, pointing out reroutes, bridges they’ve constructed (and reconstructed after flooding), and anchoring methods to keep bridges from floating away.  They also took mental notes of tasks for their never-ending to-do list. 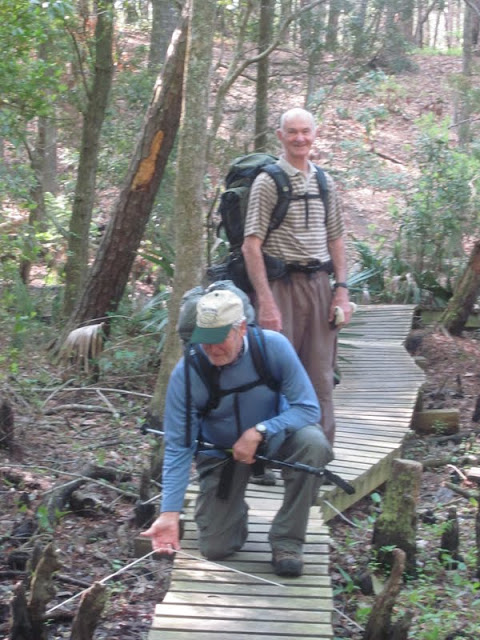 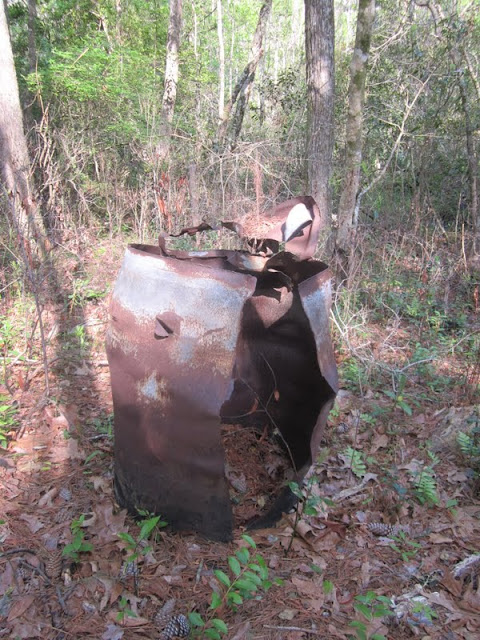 Old barrels and paraphernalia from old moonshine stills are plentiful 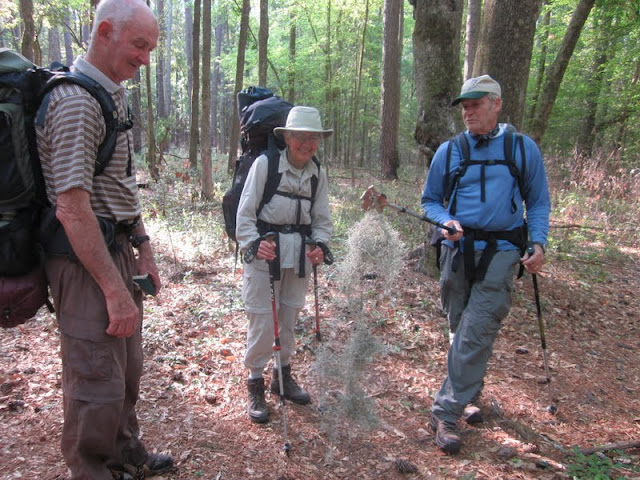 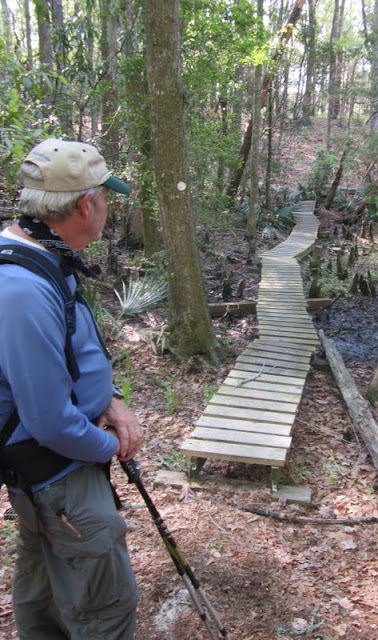 Terry at one of the many boardwalks 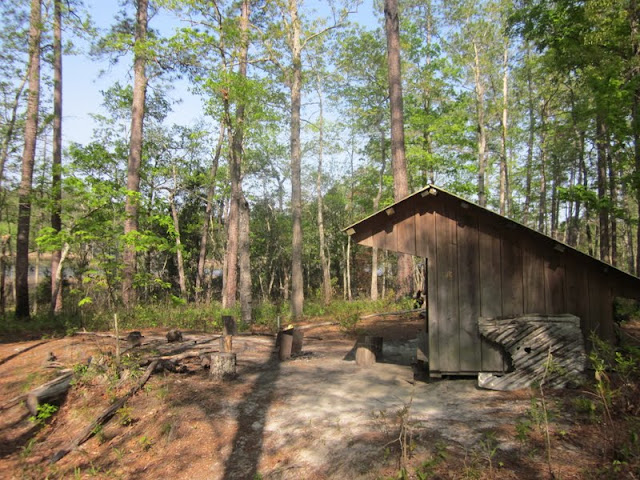 The first of three shelters along the Neusiok Trail is called Copperhead Landing – but we didn’t see any of its namesakes today.  Here we stopped for a rest and a quick snack. 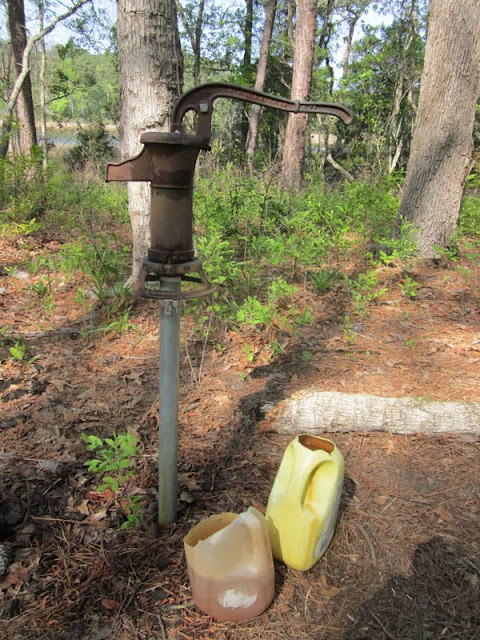 Each of the three shelters has a water source but the pump has to be primed.  It is considerate to leave water in these jugs for the next person to get it started.  There is no other reliable water along the trail, so careful planning is essential. 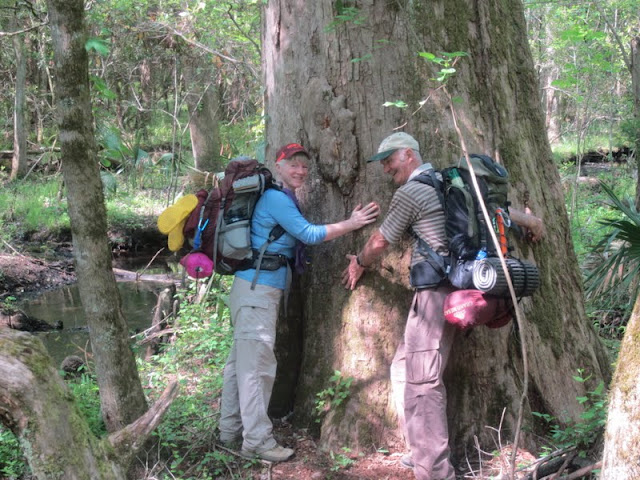 One of many enormous cypress trees along the trail
Getting a hand back up onto the boardwalk – the number and lengths of the boardwalks is incredible and a testament to how much the local maintainers love and care for this trail.  They walk it in all seasons, noting swampy problem areas, and in dry weather they help the US Forest Service install these incredible boardwalks.  I had been forewarned that wet feet were unavoidable on the Neusiok, but I never even stepped in a puddle. 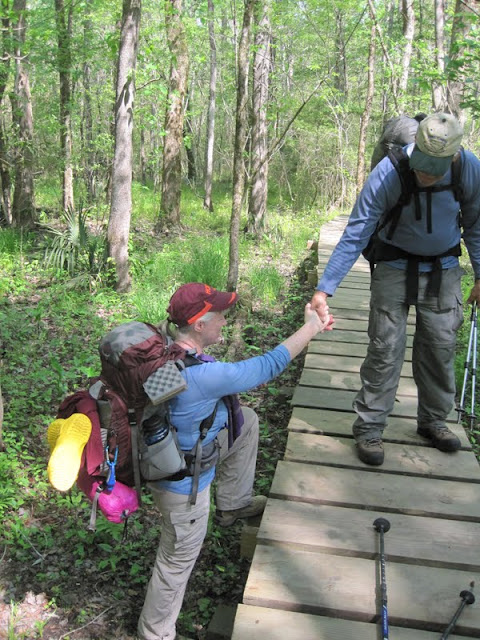 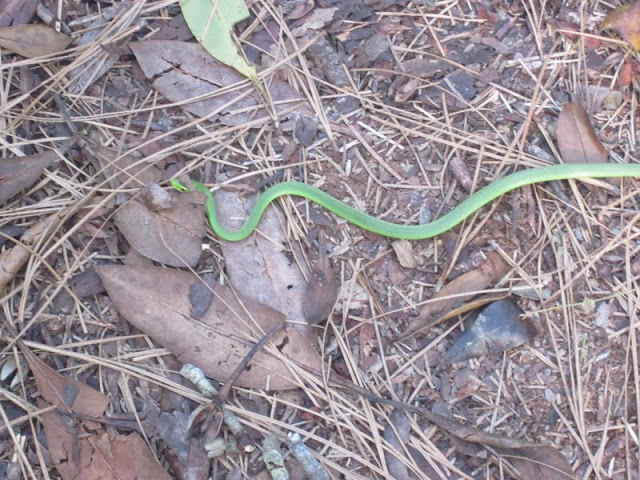 We also had been cautioned about snakes on the trail, but this is the only fellow we spotted today, looking like a bright green shoelace. 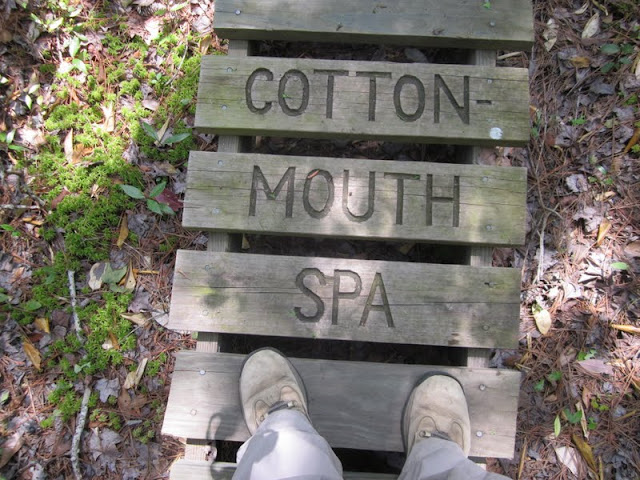 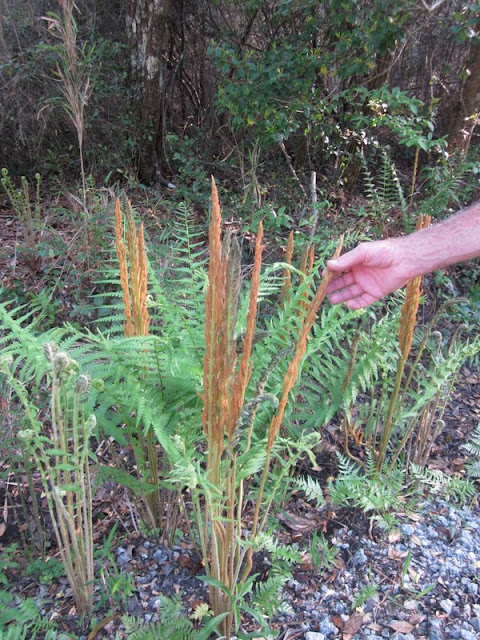 Cinnamon ferns
We spotted a letterbox semi-hidden alongside the trail, a waterproof plastic box hidden by someone that can be found by clues listed on a website (although I did not find this particular one listed, so it may have been for a more local purpose).  The more high tech version of letterboxing is geocaching using a GPS.  Letterboxes sometimes contain trinkets and “finders” can take a trinket and deposit one for the next person.  Letterboxes may also contain a log book to record your name and date that you found it.  Find out more here (warning:  fun may ensue!). 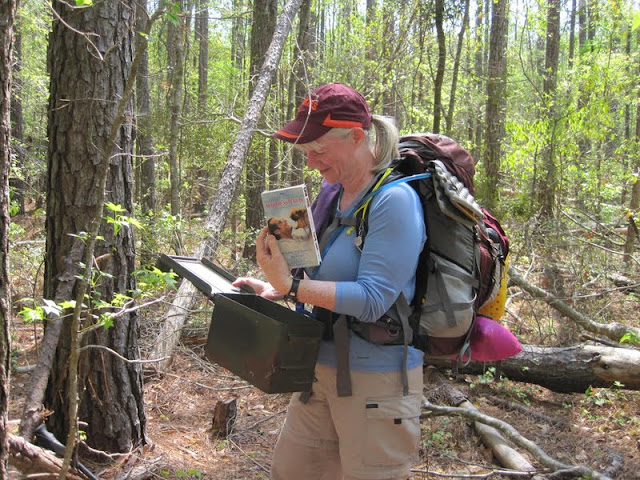 The day heated up but we were making good progress – so good, in fact, that we reached our overnight stop, Dogwood Camp Shelter, at about 1:30 p.m.  Decision time!  The next (and only) shelter was 9 more miles.  But if we stopped at Dogwood, what would we do the rest of the day except slap mosquitoes?  And who’s tired yet?  (Nobody).  The real debate was what our options were between the two shelters, if at some point we decided Blackjack Lodge Shelter was not doable.  Since there were no water sources in between, we all filled up containers at Dogwood and then pressed on. 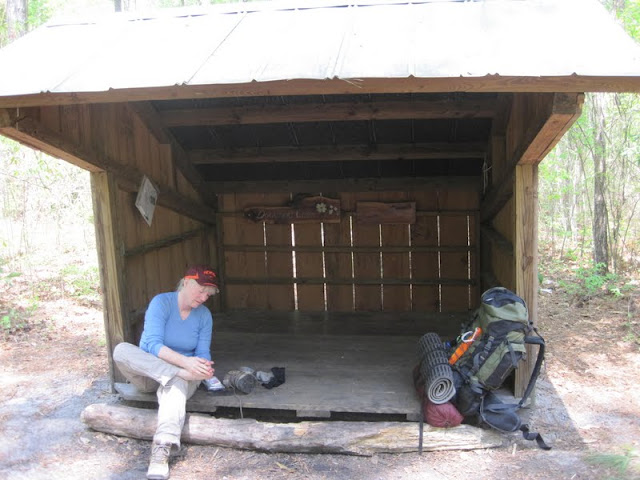 And that’s the point where mileages became very important… and we began to notice that mileages posted were a little fluid.  This two-mile gravel road stretched on into oblivion and seemed to take a hundred years to walk. 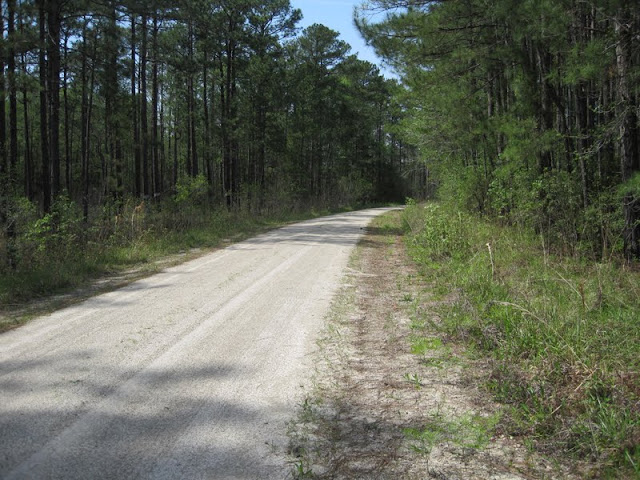 When I saw this sign I had a moment of despair – I thought we were much closer than this.  My pack was starting to rub and my hip bones were sore.  John, at 81, kept moving like an 18-year-old as I shuffled along behind. 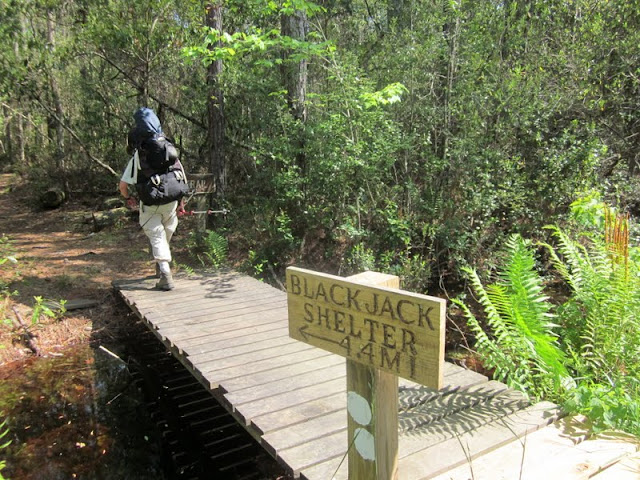 Hallelujah - Blackjack Lodge Shelter!  I floated the idea of walking the remaining 3 miles to our cars and going to sleep in a comfy bed back at Terry’s house, but no one was having any of my jazz about that.  I believe the comment was, “I carried all this stuff this far so I’m going to use it.”  So we set up camp, cooked and ate, and I soon crawled into my tent.  I was feeling every one of those 19 miles and was glad no one called my bluff. 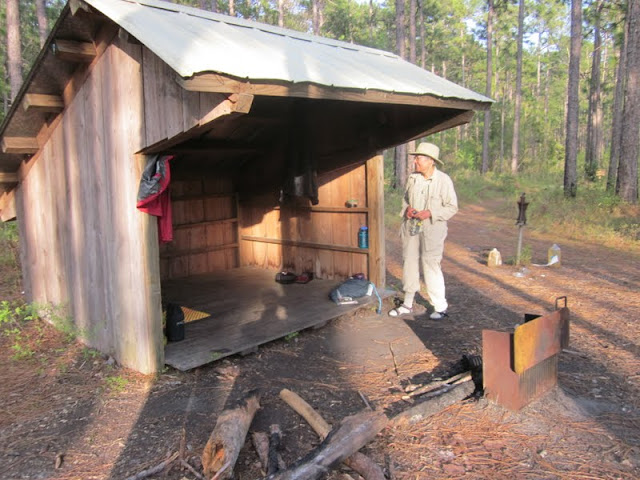 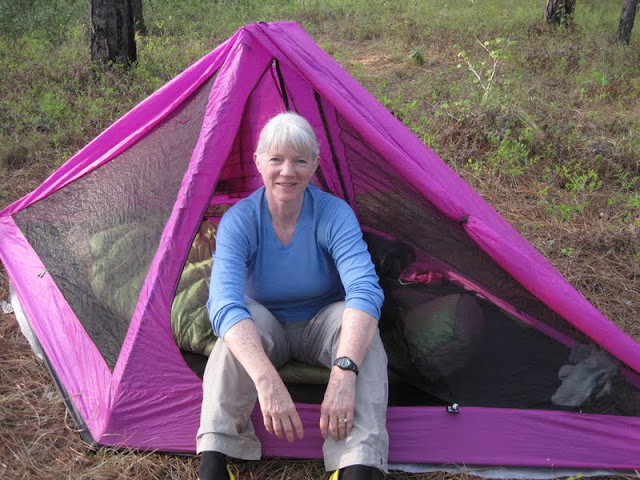 Beautiful.....yes those signs are fluid...nice choice of words. Great article.