Crossing the VA/TN State Line on the AT

Jim and I snuck away for a weekend in southwest Virginia.  Our cabin was situated halfway between the towns of Damascus and Abingdon.  The New River Rail Trail passed through the front yard and the Abingdon Winery was just down the road.  So much to do!  We managed to squeeze in exploring the vibrant Farmer’s Market in Abingdon, a meal at a locavore restaurant, and a bike ride to/from Abingdon on the Trail.  On Sunday morning we worked out a plan that made both of us happy:  while Jim biked a route on the mountain back roads, I took a little hike southbound on the Appalachian Trail.

Jim dropped me off at Mercedes Street on the western edge of Damascus where the AT leaves town and climbs steeply up to the ridge.  The day was very warm and my steps were light on the long slow gentle switchbacks, no effort at all for climbing.  A month since my last hike – too long! 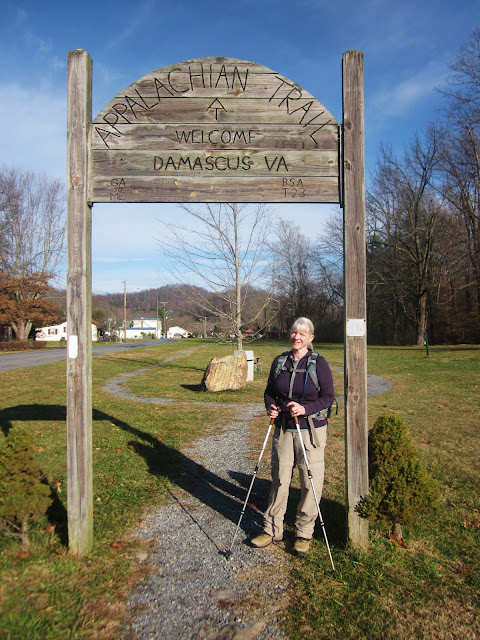 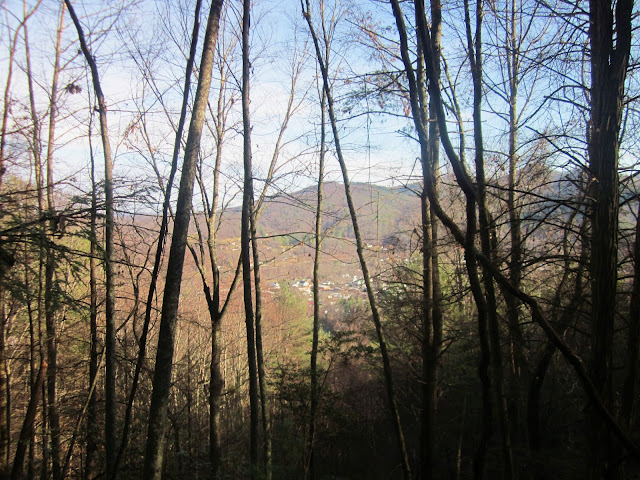 A glimpse of Damascus


After the initial up, the trail surprised me by leveling out to easy walking.  The trail was broad and maintenance was pristine, nothing to climb over or around, large blowdowns had nice cuts in them that I could just step right through.  I passed a couple of inviting campsites.  The day was warm enough that a few hardy spiders were still at work. 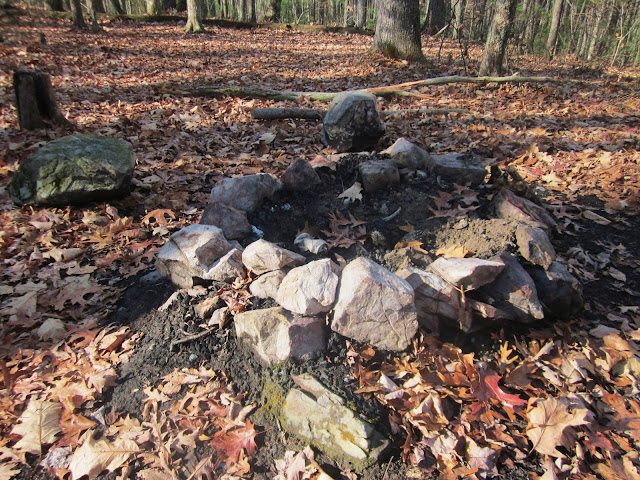 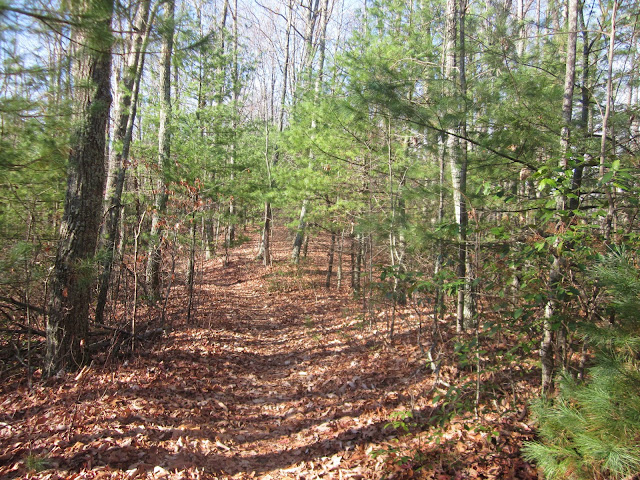 Walking softly through the Virginia pines 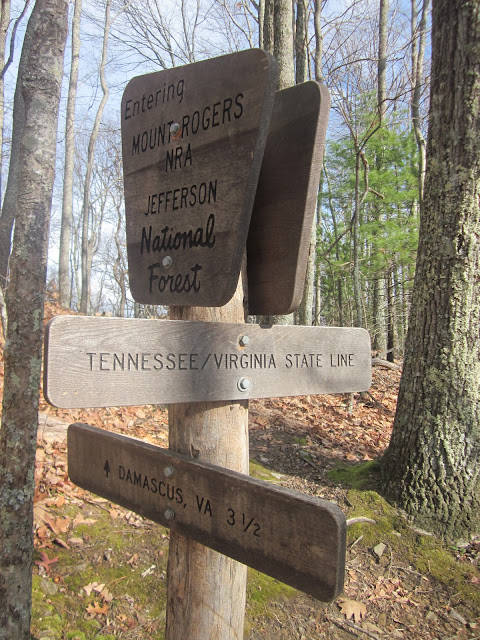 Then the climbing began, no switchbacks now, and I crossed the state line into Tennessee.


The trail changed immediately from a very wide, immaculate trail to – where is it?  Now I was looking at a narrow, faint trace with blowdowns here and there.  Don’t get me wrong, I don’t need perfection and I actually like blowdowns as a challenge.  Why the drastic change in character?  My guess is the Virginia maintainers live in Damascus, about 3.5 miles away, while the Tennessee folks have a long haul to get to this section, either coming northbound up the AT or from the side trail I was shooting for, Backbone Rock Trail, which I was getting ready to learn a lot about. 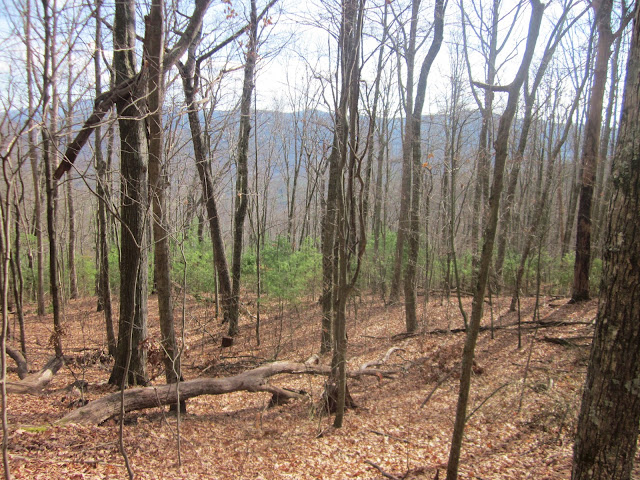 After five miles on the AT I reached my departure point and stopped to eat a little something and contemplate what lay ahead.  So far I hadn’t met anyone on this hike, and I enjoy hiking solo (as many of you know, it took me a while to develop this view), but occasionally it’s good to have a second opinion.  At the nice sign for the Back Bone Rock Trail I was not discerning much of a trail.  I knew I had to steeply descend from the ridge line.  A few dozen yards down, though, blue blazes began to appear and were abundant for the rest of the 3.5 miles. 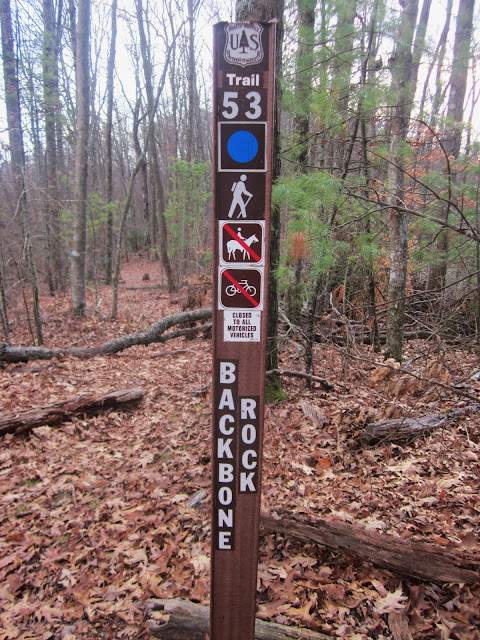 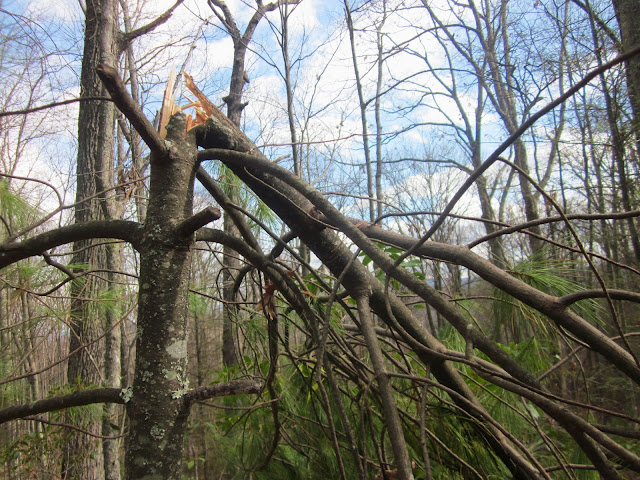 I saw several sections of trees like this, broken off at about 10 feet.

Did I say “steeply descend”?  Make that “insanely steeply descend.”  Long sections with no switchbacks at all, not many rocks to step down, but lots of dry leaves to slide on, and my thighs took a beating after already being traumatized from yesterday’s bike trip.  There was a lot of side-stepping going on as I negotiated the steepness, and I said a prayer of gratitude to not be climbing this sucker.  But will I climb back up it someday to access the AT again?

Gee, I hope I recognize Backbone Rock – uh, yes, no problem there.  It is an incredible rock formation, 75 feet tall, almost level on top, about three yards wide, and extends for a couple hundred yards with a pass cut through for SR 133 (originally a railroad).  You can walk across the top and from that viewpoint it looks like a spine.  I explored around the area, checked out the picnic areas on both sides of the road, and settled in for Jim to pick me up. 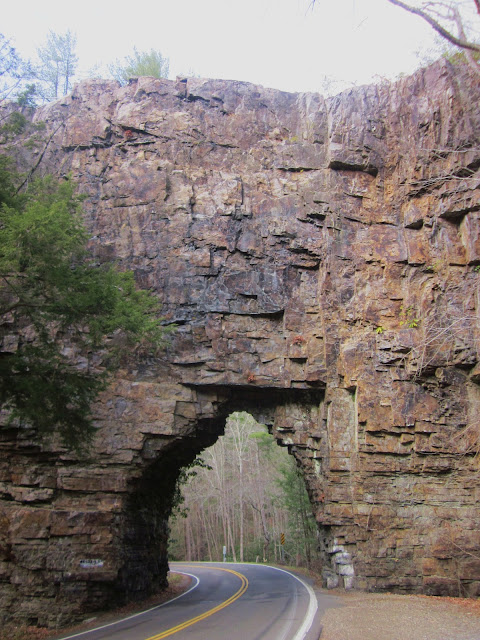 Turns out Backbone Rock Recreation Area is larger than we realized.   Jim was waiting for me at the campground area and I was waiting for him at the day use area for nearly an hour.  I finally got a clue from a posted information map and walked half a mile up the road and found him patiently waiting.  Home, James. 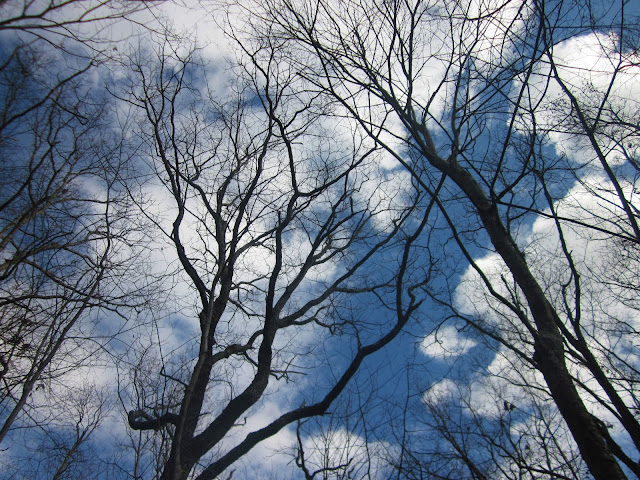 Have you ever noticed a tree standing naked against the sky,
How beautiful it is?
All its branches are outlined, and in its nakedness
There is a poem, there is a song.
Every leaf is gone and it is waiting for the spring.
When the spring comes, it again fills the tree with
The music of many leaves,
Which in due season fall and are blown away.
And this is the way of life.