AT in TN: Backbone Rock Trail SOBO to Low Gap 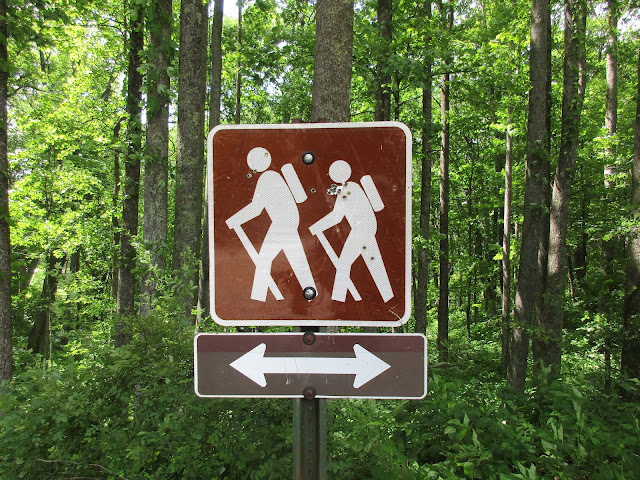 Steaming in the summer humidity of the North Carolina Piedmont, it’s important to remember that reasonable temperatures and cool breezes are waiting in the mountains.  In mid-June the Appalachian Trail was calling, “There are still parts of me you haven’t seen just over the state line in Tennessee!”

I had a little difficulty working out a shuttle for my hike.  Sun Dog Outfitters in Damascus was not able to make my timetable, which wasn’t surprising since I was calling just two days ahead.  But…when I asked if they could recommend any other shuttlers they said no, they didn’t know any.  [I thought perhaps a local resident might run shuttles on the side.]  Well, my next call was to Mount Rogers Outfitters, which set me up in about five minutes.  They were dropping off hikers at my starting point at Low Gap at the very time I wanted to be picked up.  Curious that Sun Dog didn’t mention MRO to help me out.  When I asked the MRO shuttle driver what was up with that, he shrugged and gave me a meaningful sideways look, but no comment.

My hike started on Backbone Rock Trail in the Backbone Rock Recreation Area on Highway TN-133 in Cherokee National Forest.  Several years ago I hiked down Backbone Rock Trail to exit the AT and today was the day to connect back up.  The 2.3 miles going up the trail felt easier than that earlier descent, still steep but minus the slippery leaves, and the trail was easier to discern.  I’m thinking some good trail maintainers have been at work.

At the AT intersection I turned south and hiked for about a mile to an unnamed gap.  There was a sweet campsite with log benches around a fire pit, so I sat down for a leisurely lunch.  Two men going northbound stopped at the same time and introduced themselves as James and James, father/son.  For the past 10 years Dad has been talking about hiking on the AT and had recently retired.  Son said, “Let’s go and celebrate retirement and Fathers’ Day.”  So here they were!  Today was the first experience on the AT for both, day hiking 15 miles from Low Gap to Damascus.  Son James is a Marine veteran, early 30’s, physically fit and having a blast.  The 15 miles seemed like a big bite for Dad, but he was making a memory with his son and it was all worth it. 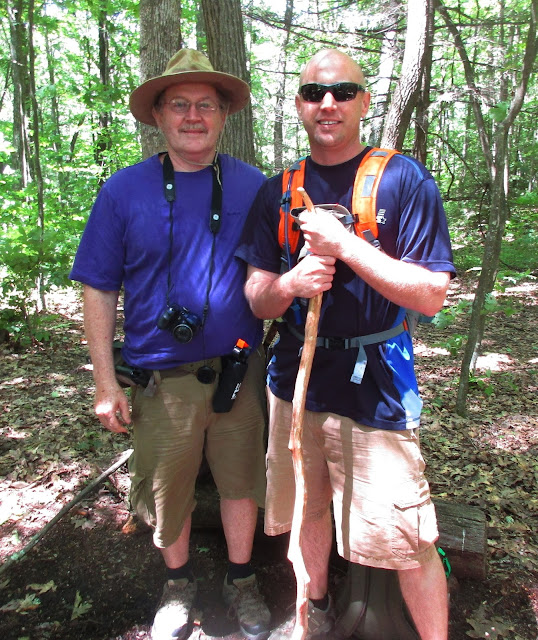 Son James was operating on practical experience in the Marines where he learned “forced marching” but carrying weight, etc., and he knew enough to have plenty of fluids for this stretch where no water was available.  He had a multitude of questions about all aspects of day hiking, section hiking and thru-hiking.  He asked about maps and guidebooks, and I showed him AWOL’s pages and the Appalachian Trail Conservancy map that I carry and how I use both to stay oriented on the trail.

I introduced myself as Smoky Scout and the younger James asked about the concept of trail names.  “How do you get one?”  I explained that hikers are often christened by other hikers with a trail name because of some circumstance or trait, and sometimes it’s good to choose your own before someone else chooses one you may not love.  For example, he’d said he was carrying Gummi Bears, so I said his trail name could be Gummi Bear.  He laughed and said he’d take it because a hiker had now given him his trail name.  Dad used to be called Eight Track, so that is now his trail name.

What a treat to meet these fellows at the dawning of a new adventure!  I wish them well.

The rest of my hike was over easy terrain, rolling gently up and down the ridgeline, verdant with every shade of green from chartreuse to jade to fern to olive to hunter green.  Sometimes I was elbow deep in the lush grasses. 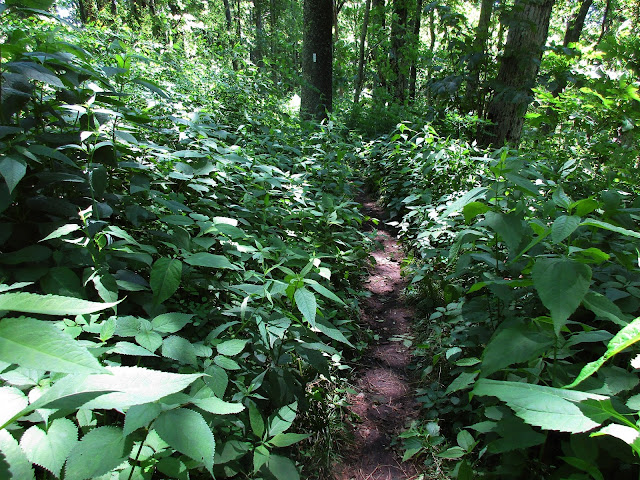 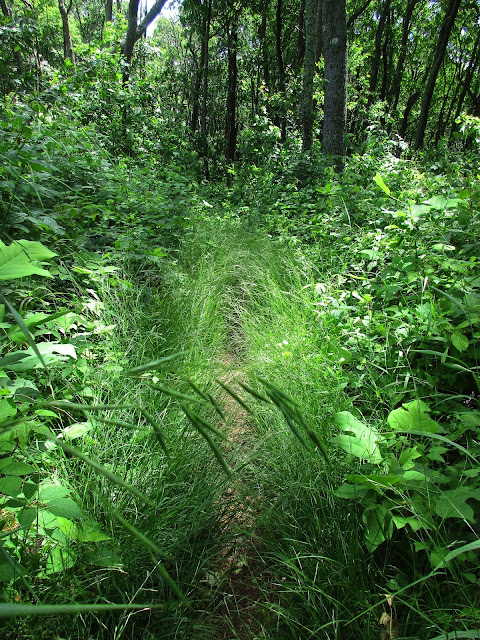 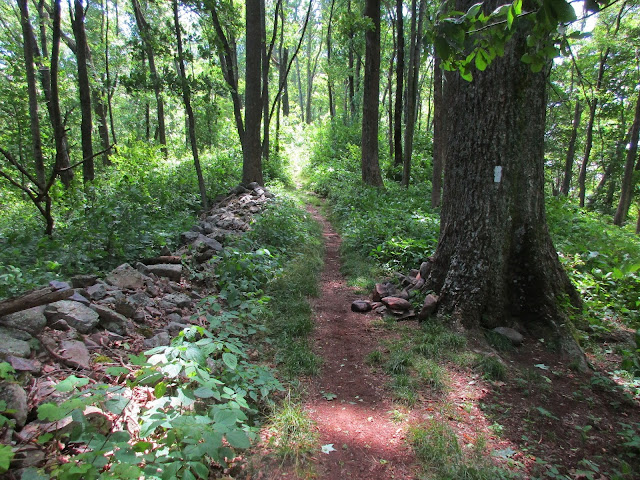 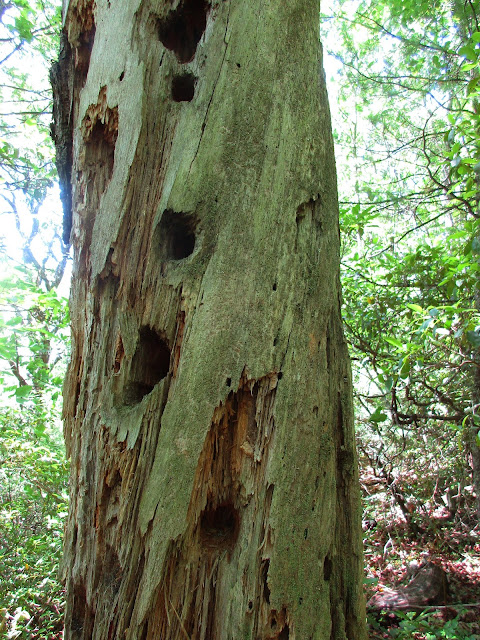 A tree’s second life as a wildlife habitat 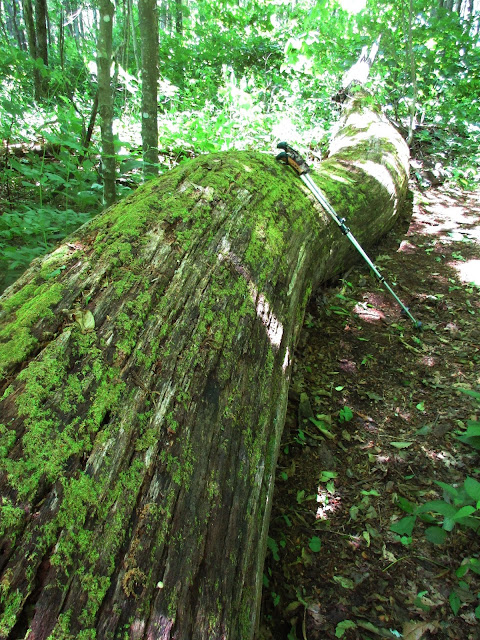 At Abingdon Gap Shelter, a maintenance crew from TEHCC (Tennesee Eastman Hiking & Canoeing Club) was replacing gutters and painting the shelter a dark brown.  We discussed renaming it the “Chocolate Pudding Shelter.” 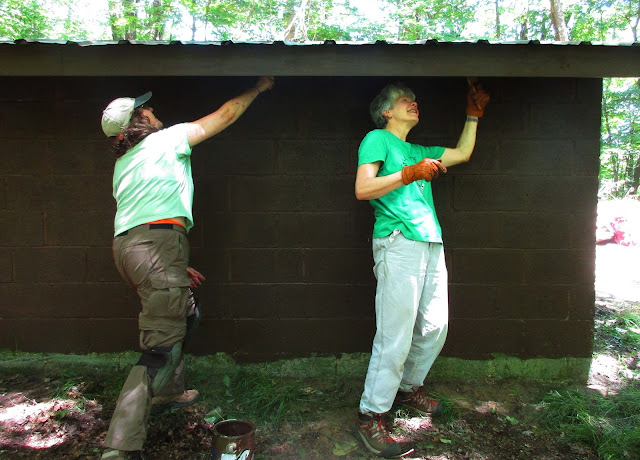 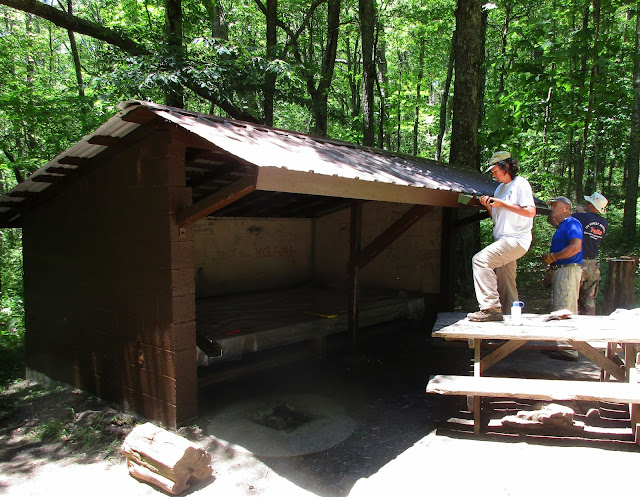 Just a mile south of the shelter I encountered the brief but steep bump up to McQueen’s Knob.  At the tree-covered summit (no views) stands this old shelter, built in 1934 and one of the oldest still standing along the entire AT.  Creepy and cramped quarters, no water source, reserved as an emergency shelter. 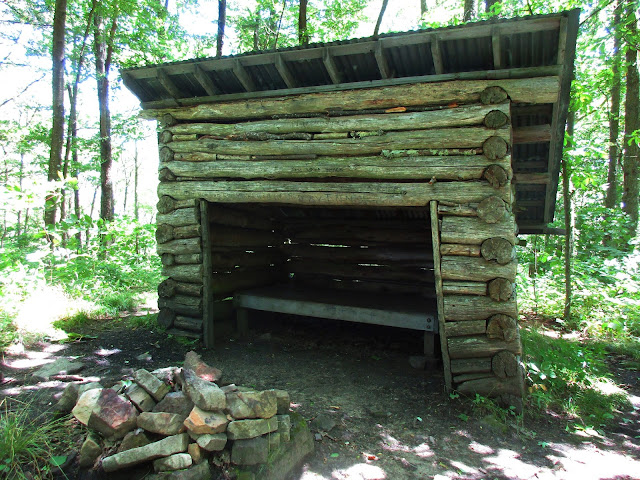 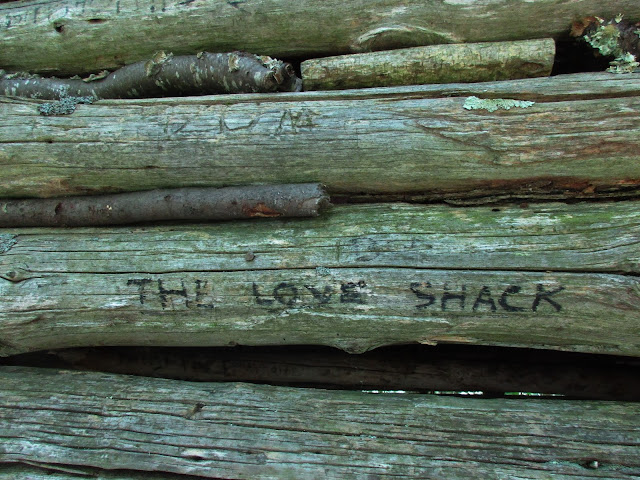 In record time and without even trying, I soon descended to Low Gap and the end of the day’s hike.  All together I met more than a dozen hikers enjoying a beautiful day on the AT.

The fun doesn’t necessarily end at the car, though.  I made a quick stop at Shady Valley Country Store, a throwback (intentional?) to days past.  Three fellas rocking on the porch said hey.  Inside, the shelves were sparsely filled but there were plenty of cold beverages floating in the ice-filled bucket.  The farmer in front of me at the cash register was buying ten feet of rope, paying with a third-party check.  He made the teenaged cashier work it out with a pencil first to check the math.  However, this store does have a Facebook page!

As often happens, the drive home was painful payback on a Saturday, fighting the traffic through Boone, Blowing Rock, Lenoir, Hickory (where a traffic accident created a detour off of the main road through a neighborhood), and my personal nemesis, the town through which all western destinations flow: Gastonia.

“For in the true nature of things, if we rightly consider, every green tree is far more glorious than if it were made of gold and silver.” ~Martin Luther