Walking across state lines sounds really cool, doesn’t it?  Hiking the AT between Virginia and Tennessee was a treat.  And a similar adventure is practically in my back yard.

I have hiked at Crowder's Mountain State Park many times.  It is the closest state park to my home and it is the first big bump in the landscape as I drive west from Charlotte.  It’s a great place to break in new boots, practice backpacking and enjoy a sunny weekend day (along with the multitudes).  Kings Mountain National Military Park is a few more miles down the road in South Carolina, and although the hiking isn’t as exciting, it’s easy to put in some miles and to enjoy the history lessons of the Battle of Kings Mountain as a turning point in the Revolutionary War.

Somebody had the idea to connect the two parks – brilliant!  A great collaboration of resources to raise awareness of public lands AND another opportunity to hike across state lines.  This route has been on my to-do list since 2009 when the trail connecting the two parks was completed.  It’s 14 miles from one visitor center to the other.

It takes a shuttle, though, and a willing partner.  Jim expressed interest in spending the day on the trail with me, so we set up to begin at Kings Mountain and end at Crowder's Mountain.  Why this direction?  Because I knew what the ending looked like.  What I forgot to consider was that we would be walking from low to high.

At Kings Mountain NMP they really want to know where you’re going and when you’ll be back.  Day hikers are required to sign in and tell the rangers a general hike plan, including estimated return time. 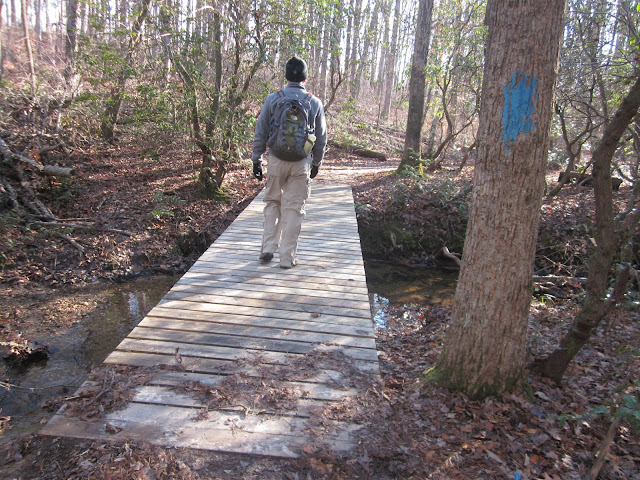 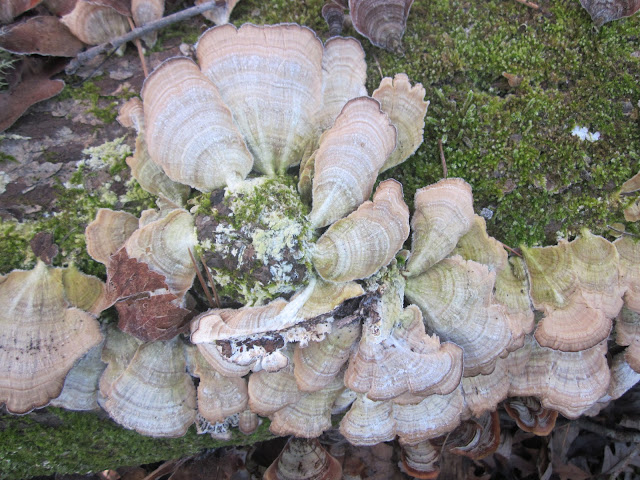 The South Carolina section is very low key and on a winter day there isn’t much to look at, open woods, but on close inspection we found lichen, always interesting.  This looks like sea shells. 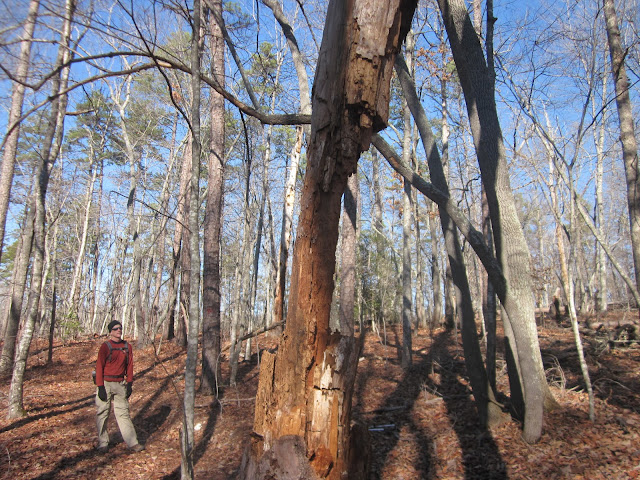 When should we yell “timber”? 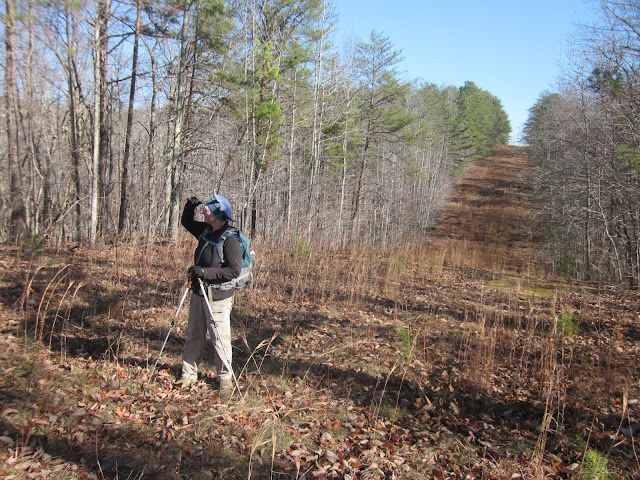 Near the state line, a wide path is cut through the forest for utility lines 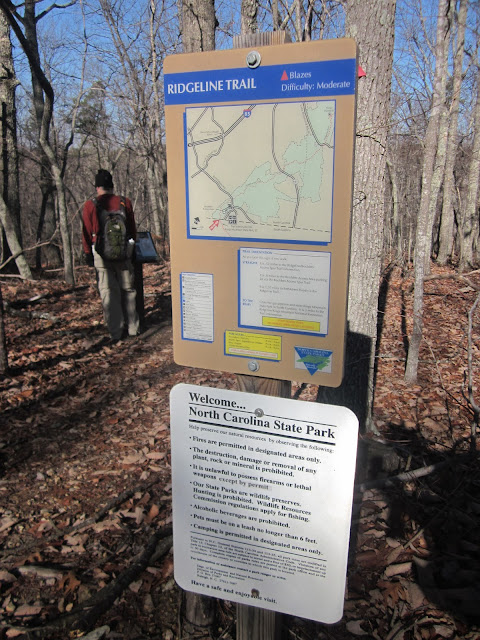 The Ridgeline Trail includes three crossings on small country roads.  Soon after the last crossing we took a side trail to Buzzard’s Roost access area, thinking it was a view, but it was a parking lot for climbers (where were they climbing?  Dunno.)  Hey, at least there were restroom facilities, and lots of picnic tables, and what looked like an indoor meeting room, pretty fancy.  This fact-finding detour cost us a half a mile, but at least we know what’s there now. 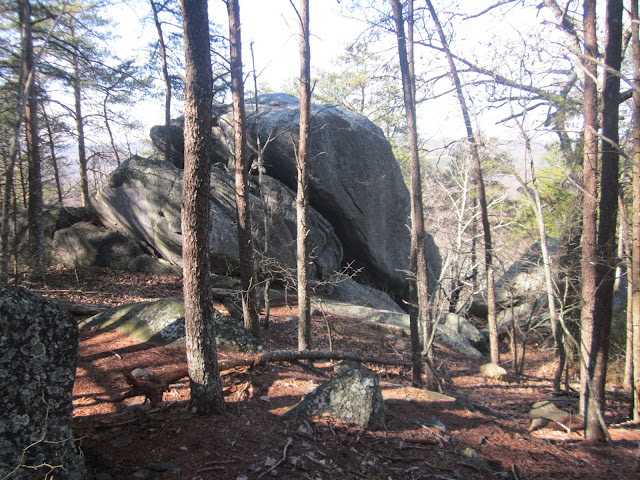 Boulder overlook – there really is a view

In North Carolina the trail began to rise and I began to bonk a little bit.  14 miles is a long way even if it’s not much elevation, but add the elevation at the end and it’s tiring.  And for some reason I act more cranky when I’m hiking with Jim than with other people.  Is that because I can get away with it?  Meanwhile, he hikes on and on without appearing to be affected.  It’s all those miles on his bike that have made his legs of steel.

Entering Crowder's Mountain State Park after all that flat walking, we felt like we were in big mountains.  The Ridgeline Trail intersects with the Pinnacle Trail near its western terminus and its main attraction a quarter-mile to the left.  The Pinnacle or King’s Pinnacle, a monadnock rising to 1,705 feet, is near the center of the park but most people hiking from its eastern end beginning at the Visitor Center consider it the end of the line and don’t hike further.  And for years it was the end of the trail, until 2009 when the Ridgeline Trail connecting the two parks was completed.


King’s Pinnacle offers long distance views to the west, sweeping flat lands of the Piedmont.  It was extremely busy as expected on a nice Sunday, dozens of people, lots of kids climbing the rocks and freaked out parents keeping them from the edge.  Always good to see kids outside getting dirty and taking risks, I say. 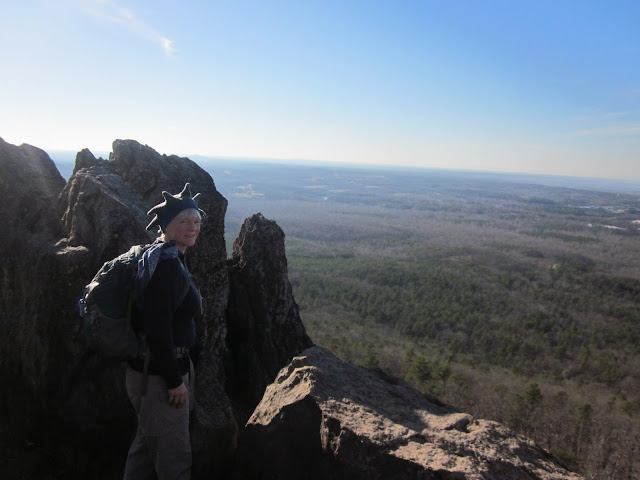 Not done yet - two miles down to the visitor center parking lot, then the long dull shuttle back to Kings Mountain NMP to pick up the second car.  The rangers were waiting for us.

Look deep into nature, and then you will understand everything better.  ~Albert Einstein