Make lemonade out of lemons.  A closed door can show an open window.  Every cloud has a silver lining.  Can’t go to Yellowstone?  Go to Dry Tortugas National Park instead.

Last summer Jim and I pulled the plug on a trip to Yellowstone National Park.  We were able to cancel all reservations without penalty except our airline tickets, but we had until mid-February 2015 to use them.  Where shall we fly to in February?  Certainly not anywhere that could be threatened by bad weather.  So go south.  And how far can we go to get our money’s worth?  Well, Key West looks about right.  And hey, they have a national park there, too. 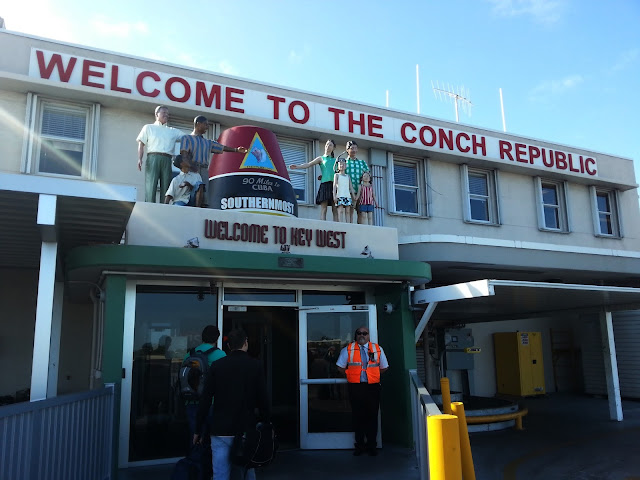 Making our weekend as long as possible, we left Charlotte at 6:00 a.m. on Friday and returned at 10:00 p.m. on Sunday, giving us essentially three full days while paying for only two nights’ accommodations (Key West is an expensive place to sleep, especially in February).  We got a cab from the airport to our little boutique hotel and then walked, walked, walked everywhere.  And ate, ate, ate.  And played tourist.  Some highlights: 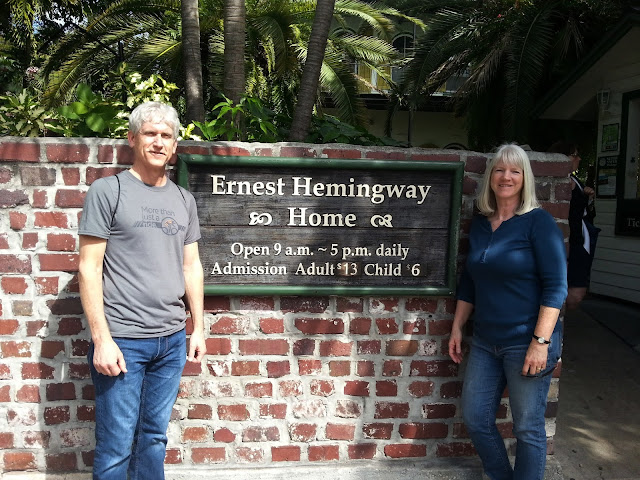 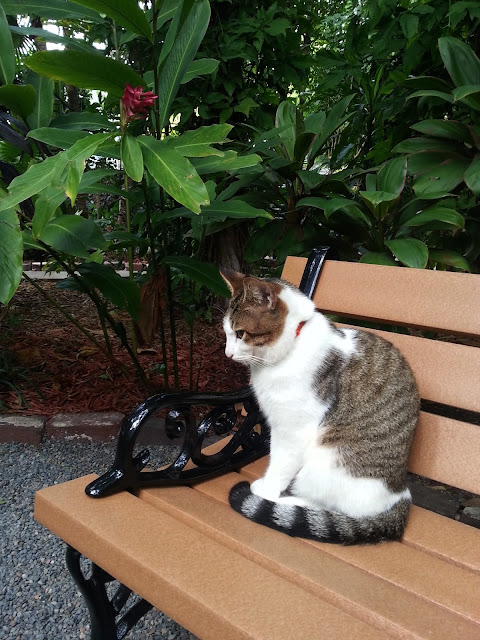 Hemingway cat descendants everywhere, including some of the six-toed variety 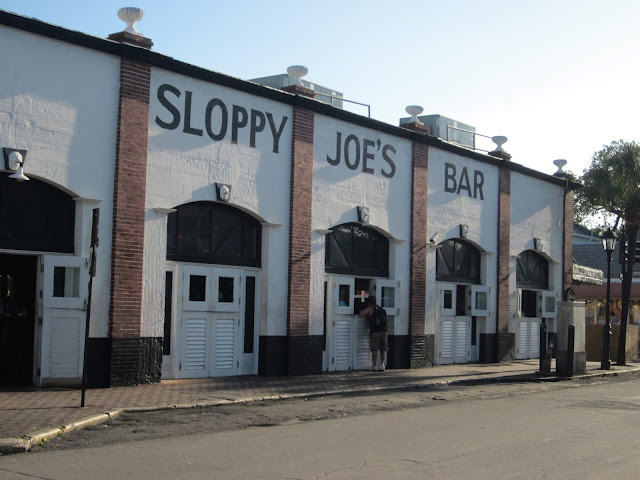 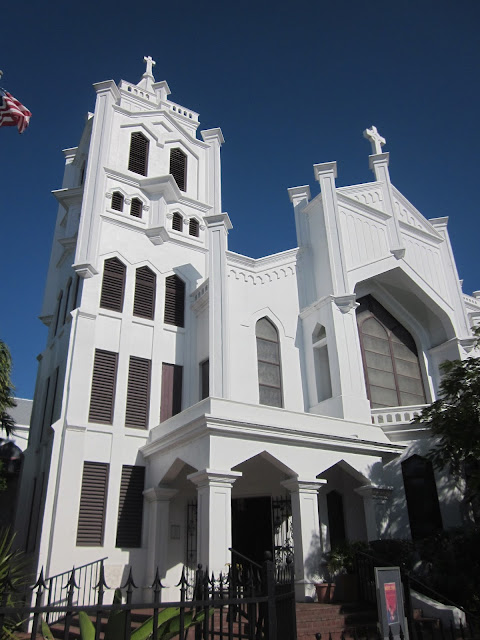 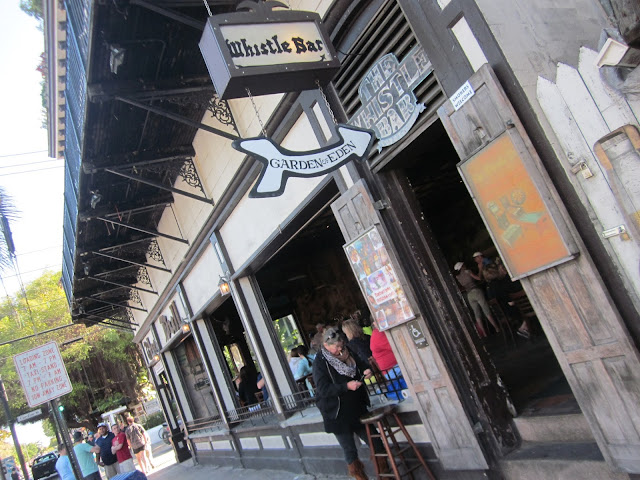 Whistle Bar (we discovered that the rooftop level is clothing optional) 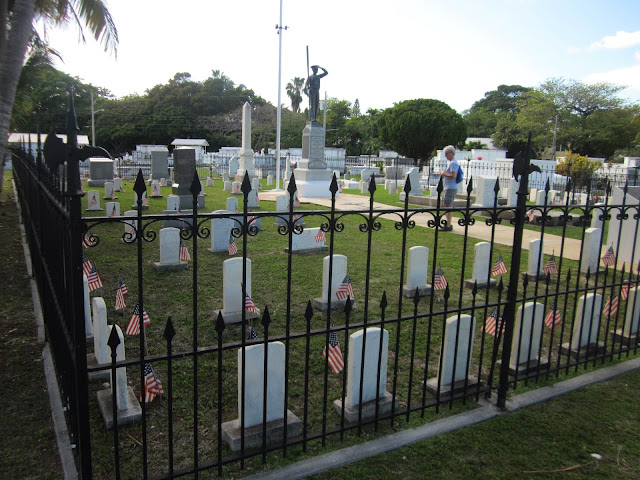 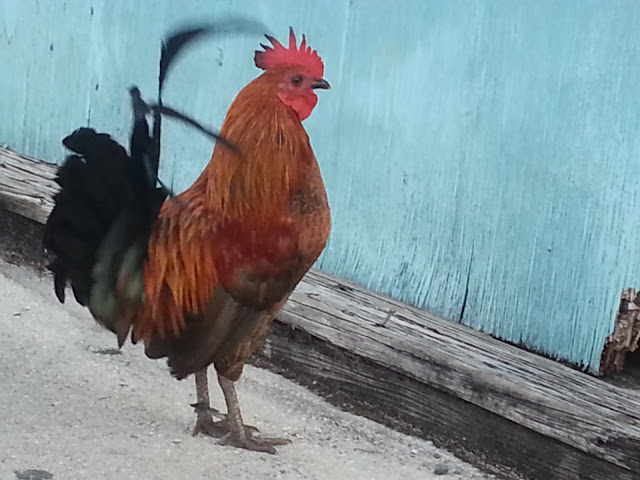 Roosters roam freely all over town 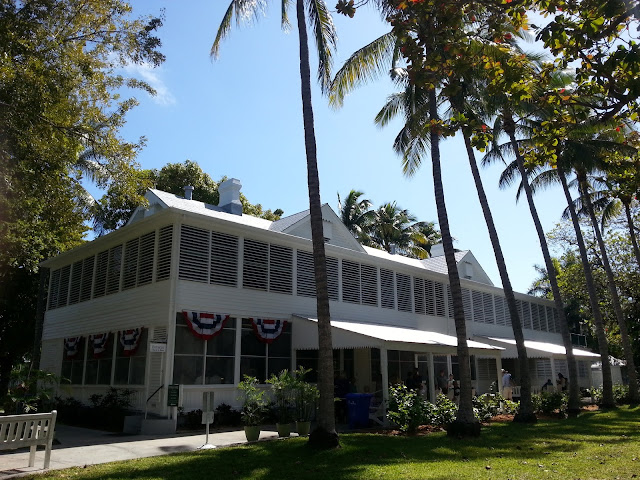 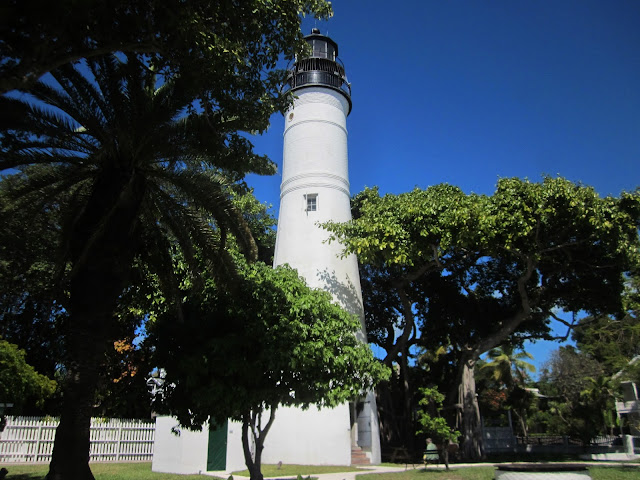 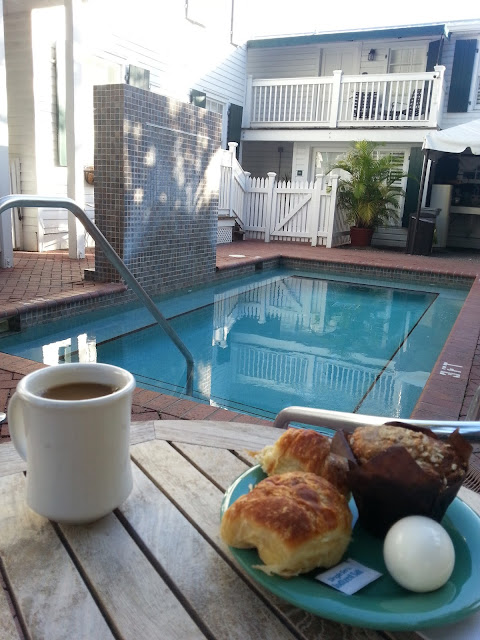 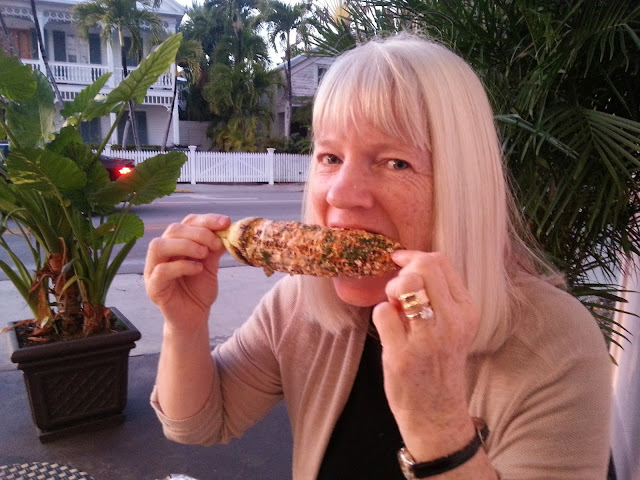 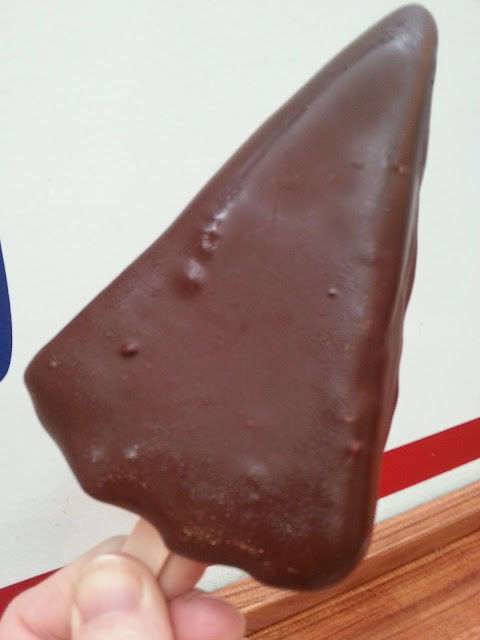 Chocolate-dipped key lime pie on a stick – what genius thought this up?  I may have indulged more than once….

The main event was a day trip to Dry Tortugas National Park, 70 miles southwest of Key West.  The 100-square mile park is mostly open water with seven small islands and features Fort Jefferson, the largest masonry structure in the Western hemisphere.  The name is derived from “tortugas” which means turtles (we didn’t see any) and “dry” refers to the lack of a fresh water source.  The location was considered advantageous for a defense fort in the early 1800’s, but the Civil War disrupted its construction and it was used as a temporary prison.  By the time construction resumed, the fort’s design was obsolete for advances in weaponry, and it was never completed.

The only way to visit other than a private tour boat or plane is via the Yankee Freedom Ferry, which departs from Key West in early morning and returns in late afternoon.  The pricey ferry carries about 130 passengers plus the crew and includes breakfast, lunch and snorkeling gear (whether you want to use it or not).  The ride each way is about 2.5 hours.  If the seas are a bit choppy, unlimited barf bags are complimentary.  Sorry to say that we had a rough ride out and an even rougher ride back.  The brisk wind was so strong that few people tried snorkeling.  The park itself was fascinating: 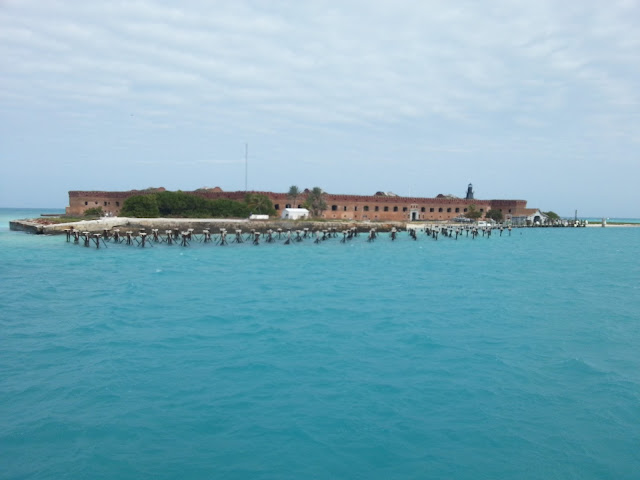 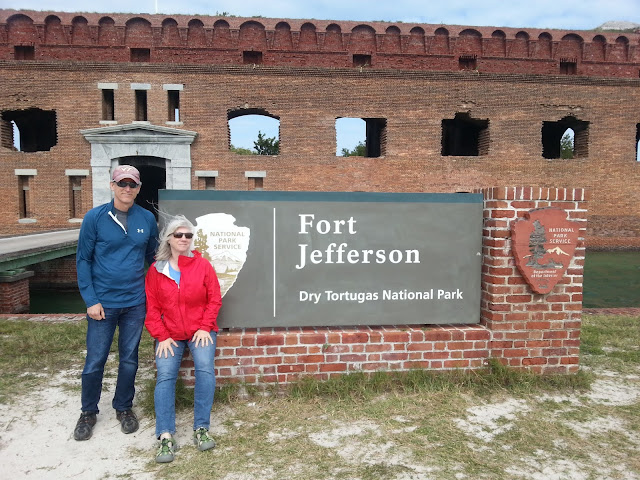 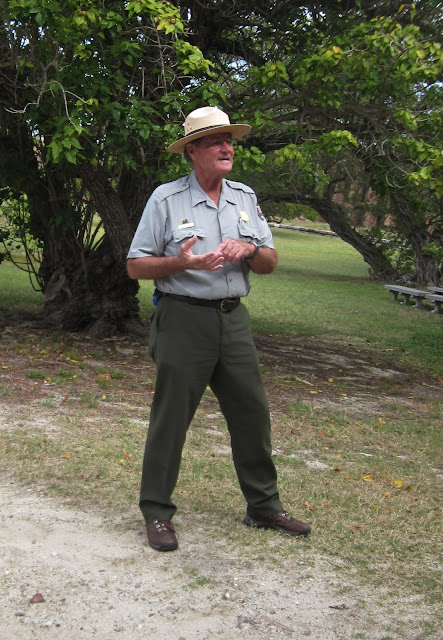 We had a choice between a tour by the ferry service or a National Park Service ranger and we went with the latter, which included commentary on flora, fauna and marine life as well as the history of the buildings. 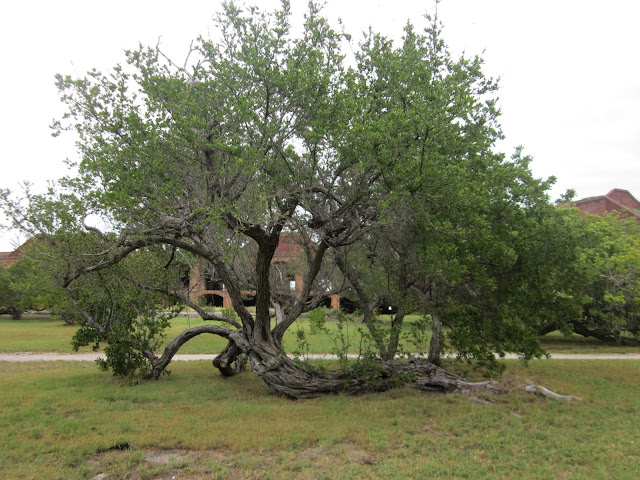 Buttonwood tree on the fort grounds 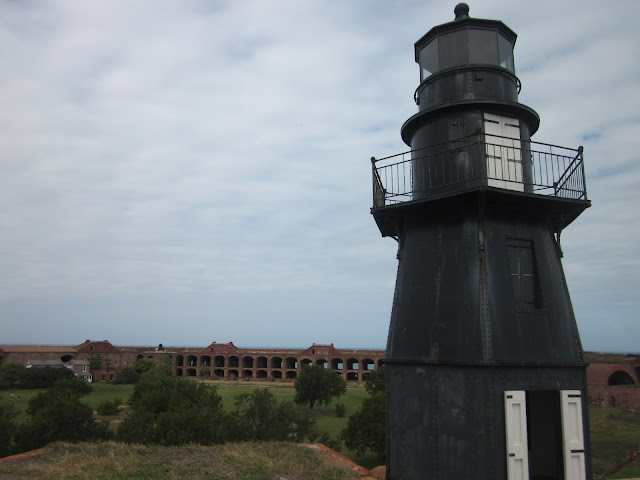 The lighthouse on the edge of Fort Jefferson 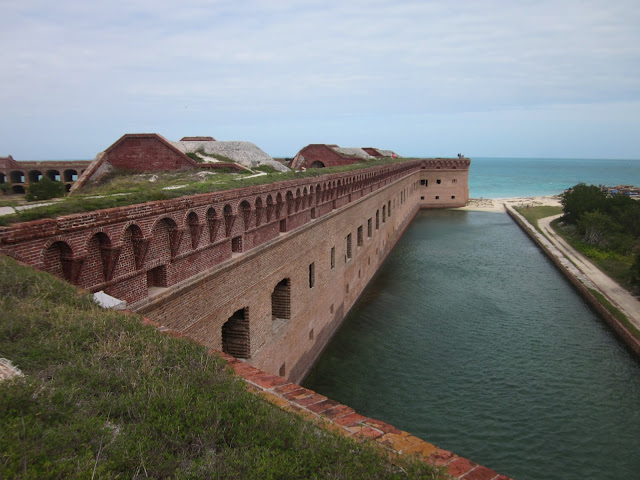 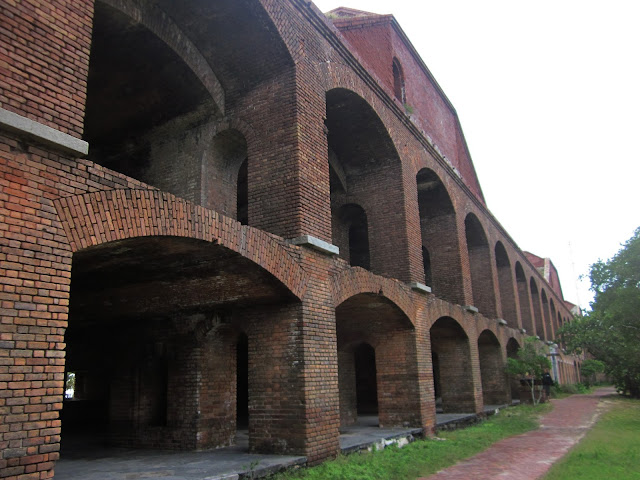 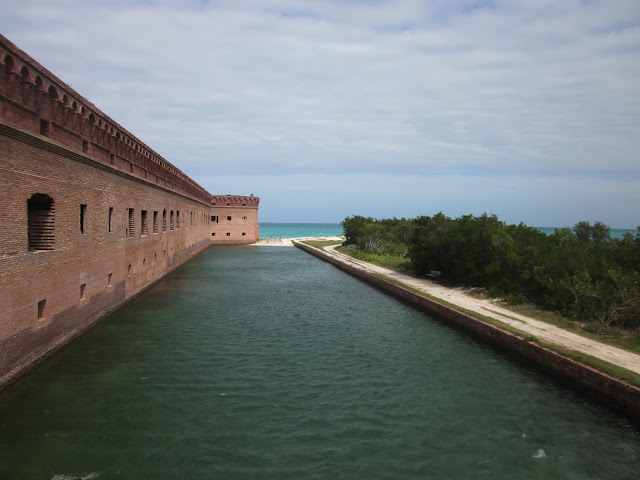 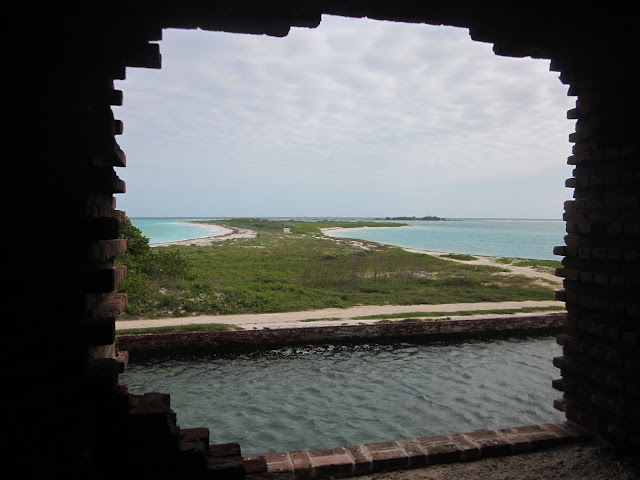 View through a “window” 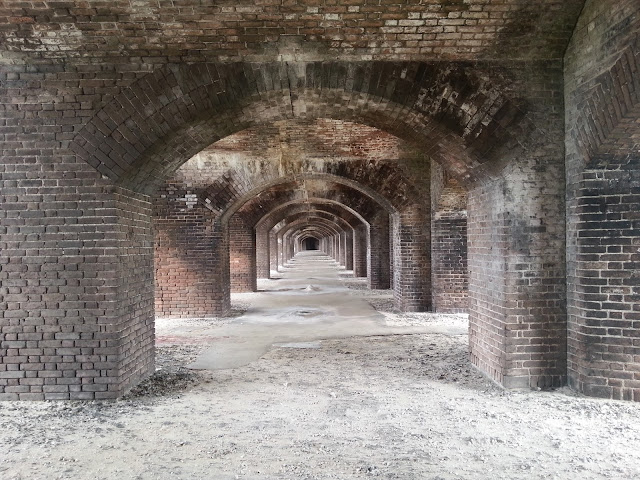 Walking through the fort A small 10-site campground area is located next to this lovely little beach, surprisingly well protected from the winds by a big sand dune.  There are pit latrines for the campground (closed while the ferry is docked, supposedly so they won’t be overwhelmed by the number of people).  You must bring all your own water and pack out all your trash. 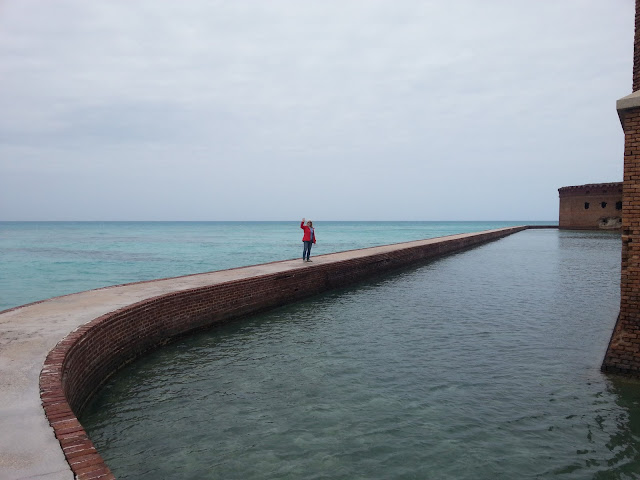 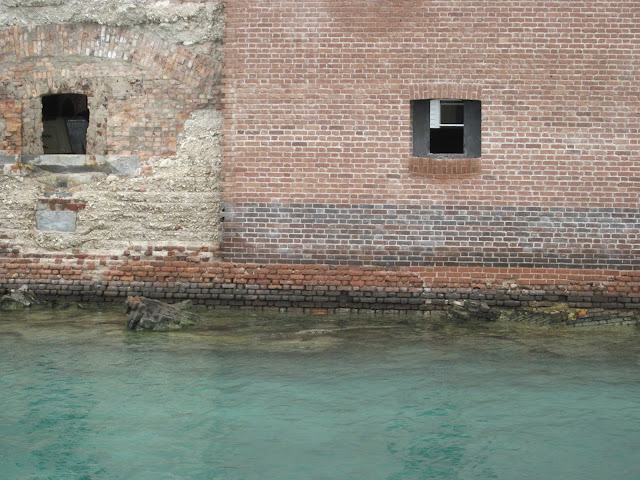 A resident crocodile named Carlos lurks in the moat (can you spot him?)  He arrived a couple of years ago via a tropical storm.

Learn more about Dry Tortugas National Park here.  I highly recommend visiting this unique place.  What a great country we live in that protects places like this as well as Yellowstone National Park!

“What we have once enjoyed we can never lose; all that we love deeply becomes a part of us.”  ~Helen Keller