Haven’t been there before, two maps that don’t quite agree, don’t know what trail conditions are like, a long drive to and from:  all good prerequisites for an adventurous exploratory Carolina Berg Wanderers hike.  I posted my desire to hike to the Camp Creek Bald Lookout Tower on the Bergs Meetup page and got a good response from a cross-section of hikers.  To my amazement, even the “old-timers” had never done this hike before.  We would truly all be “first-timers.”

Where is Camp Creek Bald Lookout Tower?  It sits just a smidge away from the Appalachian Trail, 20 trail miles north of Hot Springs, NC.  There are several ways to reach it:  hike north or south on the AT, of course, or drive close to it via a Tennessee access road, or (my choice) hike a few miles on a lollipop route originating on a North Carolina gravel road in Pisgah National Forest.

Nine hikers tumbled out of cars at the trailhead, pulling on boots, opening trekking poles, deciding on layers (how cold does it feel?  How long until I warm up?).  The sky was deep blue and the trail was waiting. 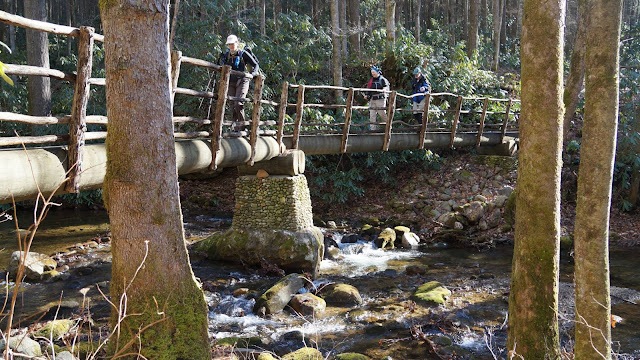 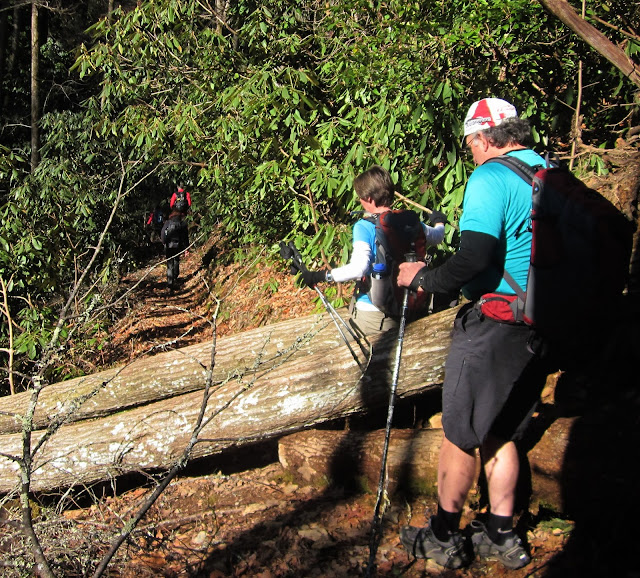 A few obstacles on Hickey Fork Trail, but overall conditions were better than I expected 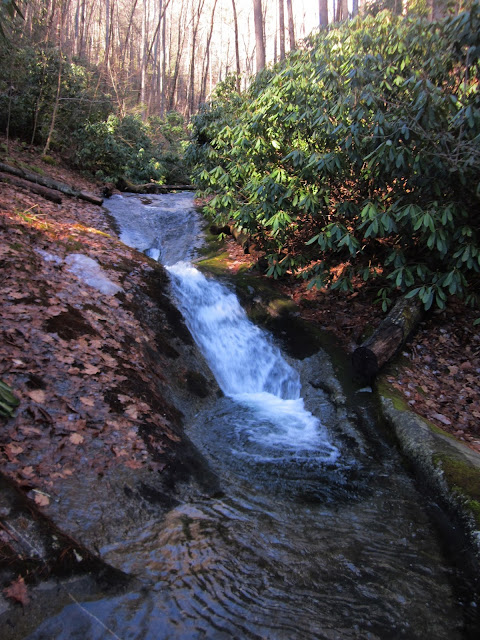 The trail climbed alongside the West Prong of Hickey Fork Creek for about 1.5 miles.  It was not at all tempting to go down this waterslide 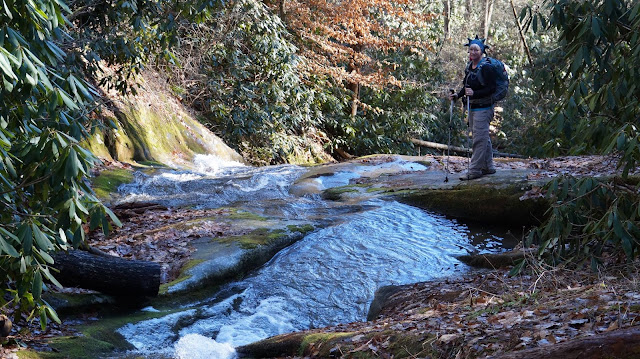 At the bottom of the slide, I’m looking skeptical 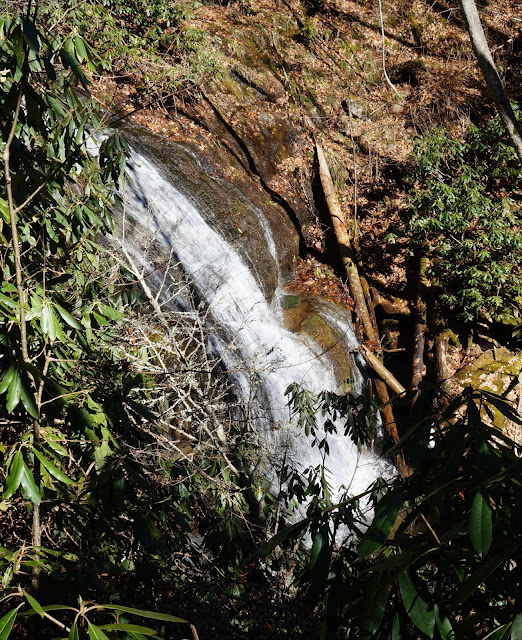 Hard to see even in wintertime with minimal foliage, but Jeff got a good photo anyway – a 30-foot unnamed waterfall on West Prong of Hickey Fork 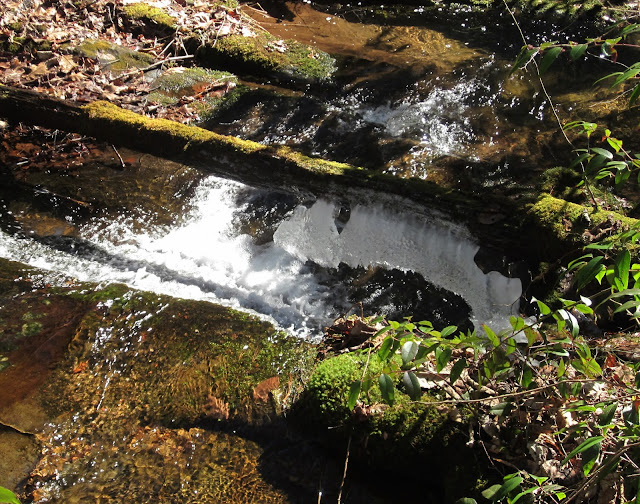 Once the trail left the creek the serious climbing started, at times crazy steep to the point where swear words were necessary to stay motivated.  The only two short switchbacks were near Seng Gap; 20 switchbacks would have been helpful.  But this is a national forest, not a national park, and different guidelines for trail building and maintenance apply. 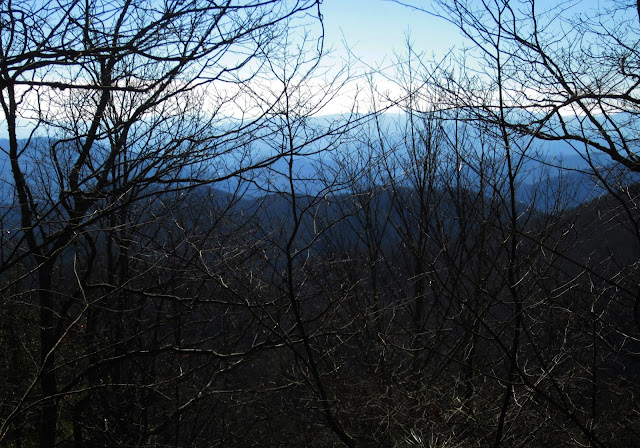 Seng Gap was confusing with five intersecting trails and required some thought to choose the correct one, even using the guidebook narrative, because signage was missing.  This was the end of Hickey Fork Trail and we turned right onto Pounding Mill Trail, still going up but at a more moderate grade.

About a mile later we reached another inter- section, this one at White Oak Flats Trail.  We took a short break to gather everyone together and make note that on the return hike this would be the decision point for a loop back to the car or just go back the way we came.  We were plenty warmed up by now. (Jeff's photo) 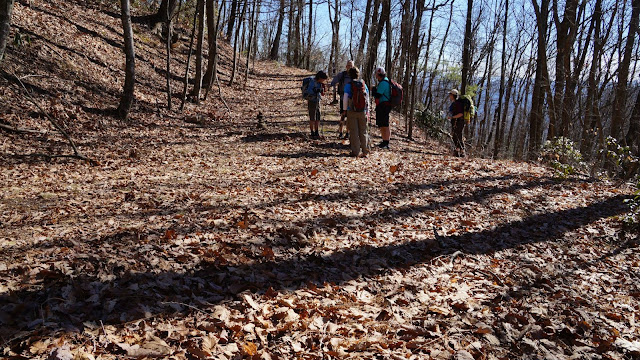 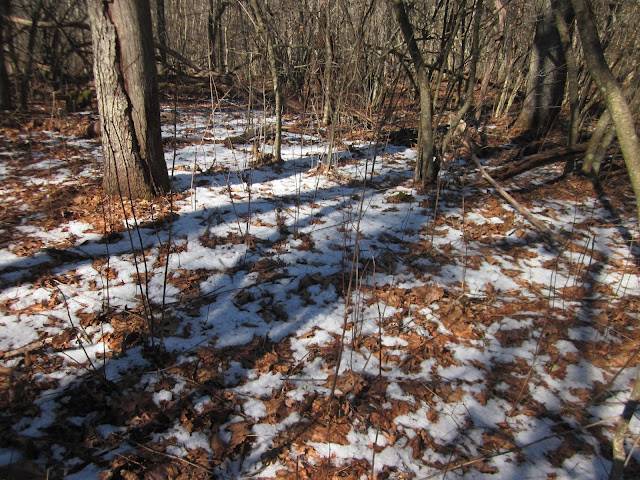 The climbing wasn’t over.  In fact, the total hike to the lookout tower is 5.5 miles and 3,000 feet elevation gain.  That is a serious workout, but isn’t it better outdoors than in a gym?  Jennifer, who was hiking with us for the first time in almost a year, began to lag behind a tiny bit, worrying about being last.  Mike hung with her and encouraged her, reminding her that she would arrive at the same place as everyone else just a few minutes later (true). 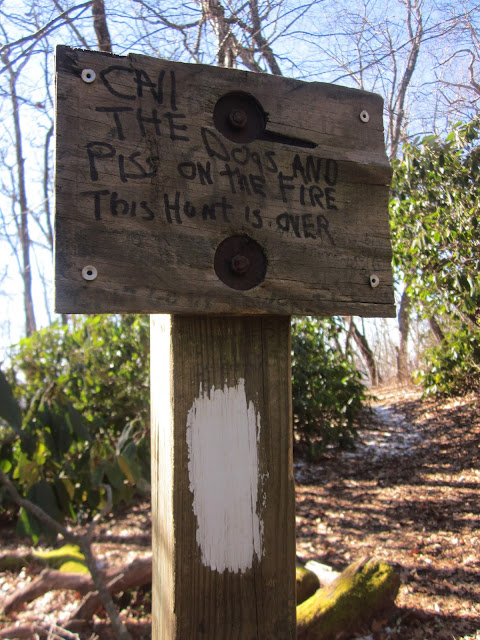 I hiked alone for the last mile until the trail reached the AT, where I paused to wait for Mike, Jeff and Jennifer.  A little hiker humor here.

When they reached the sign, Jennifer decided to stop and eat there rather than push on the last .2 miles to the tower, a smart decision because she knew her body needed the fuel.  We continued on and checked out the tower amidst all the communication junk. 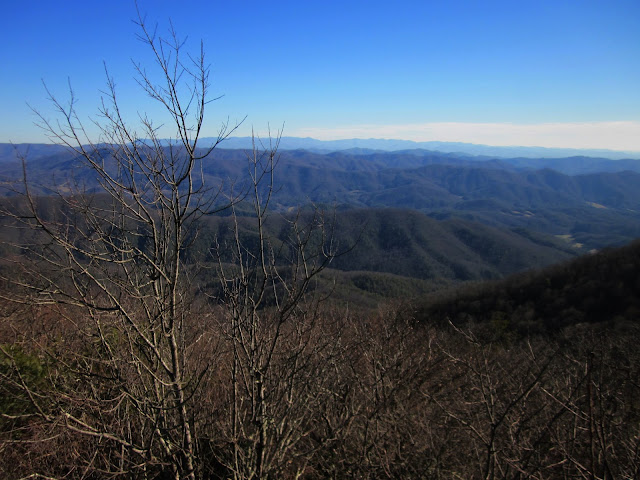 The tower cab was locked so we were only able to climb up the stairs.  A stiff wind was blowing and I struggled to hold my camera still. 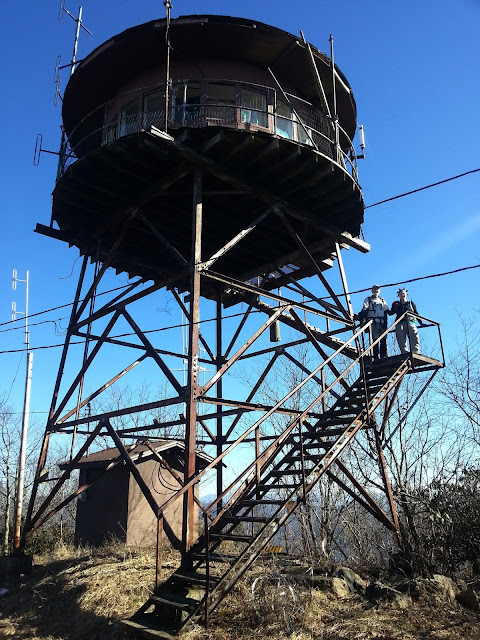 We found the rest of the crew eating lunch behind a service building in a spot protected from the wind.  And who should appear but Jennifer, well fed and feeling better!  She confessed that today was the first time she had stepped onto the Appalachian Trail.  No wonder she stopped to eat there and have a private moment.

Perusing the guidebook’s trail map (much more detailed than the NatGeo #782 map), we decided to try a short alternate route back to Pounding Mill Trail.  We hiked south on the AT for about a half-mile (Jennifer’s first hike on the AT!) and then left the trail to bushwhack.  (Wintertime is the right time for bushwhacking.)  In less than a hundred yards we connected with Pounding Mill Trail, cutting off more than a mile, and enjoyed the downhill back to the intersection with White Oak Flats.

At that junction everyone opted to take White Oak Flats, making the loop of the lollipop route and avoiding the steepest section we had climbed.  White Oak Flats is a longer trail, so we added back the mile we had cut off, but with a more gentle descent.  I assumed that this trail would be similar to the other trails we had seen so far, but I was wrong.  It started out along an old forest road, but soon dropped off onto a much narrower, less distinct trail.  Wasn’t hard to follow, just a different character, a lesson not to ever make assumptions in the woods. 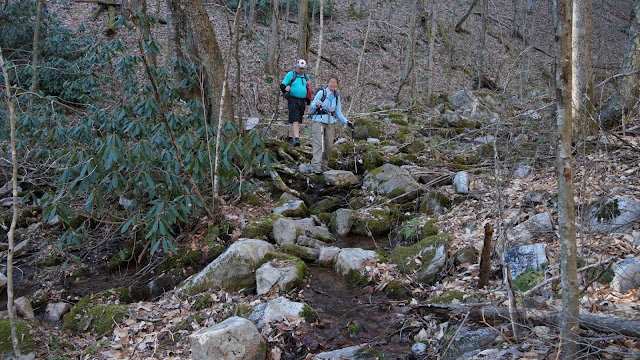 The trail ended at FS 465 facing a 1.4-mile walk to our cars.  Although it was a flat walk, it felt like a lot more than 1.4 miles.  The last mile is always the longest because at the end of a hike your pace slows down without realizing it. 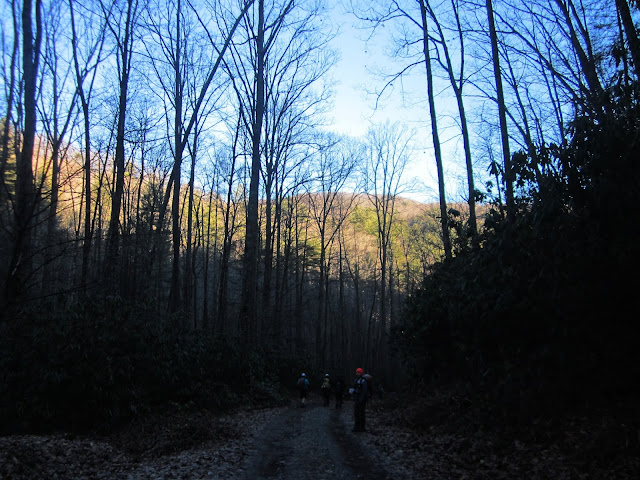 We finished the hike with some daylight left before 5:00 p.m., which made me very happy, no injuries, everyone accounted for and ready for Mexican food.  Bring on the margaritas!

And will the next hiking challenge please stand up?

“I am always more interested in what I am about to do than what I have already done.”  ~Rachel Carson

Posted by smoky scout at 4:03 PM No comments: